Home Resources Books Where Did the Idea of Monks Originate? 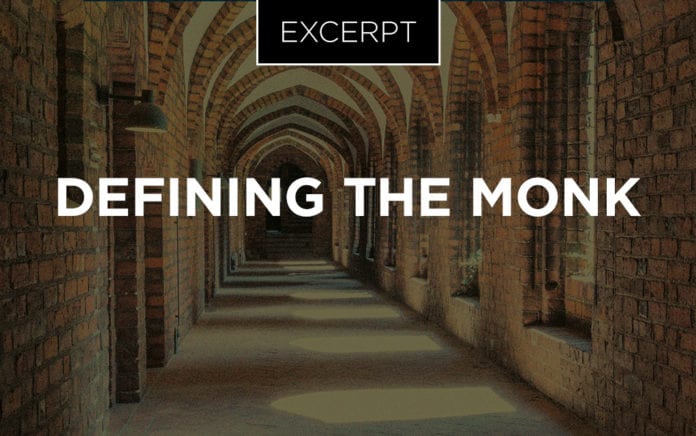 There are several misconceptions about monks. Here’s a brief history of where the word originated.

Excerpted From
The Monkhood of All Believers
By Greg Peters

When some people are asked, “What do you think of when you hear the word monk?” they may imagine a dour-looking individual dressed in black with head bowed while he quickly scurries from one place to the next, anxious to avoid any unnecessary conversation in order to keep himself unspotted from the world. Such an erroneous conception of a monk even became a stereotype, for example, in the satirical cartoons of Punch magazine in nineteenth-century England, when the Church of England was undergoing a revival of monasticism that was unfairly characterized and demonized as “Roman Catholic” (a slur). Others may imagine an overly scrupulous masochist, wearing a hair shirt and flagellating himself regularly in order to discipline his unruly body. This image of the monk, unfortunately, is put forward by popular fiction writer Dan Brown’s The Da Vinci Code, for example.

Of course, anyone who has spent time at a monastery (certainly in the past forty years) knows that the above caricatures are exactly that—caricatures.

Sure, monks like those described above may have existed at some monasteries in the past (and may even endure in some houses today), but there is no doubt that these images are unfair (mis)representations of the monastic life, which is more often characterized by joyfulness than somberness and by other-centeredness than excessive introspection. In fact, it is not only (nor primarily) what is on the outside that makes the monk (i.e., a habit or living in a monastery) but what is on the inside. The inner life of the monk, not its outward, visible manifestations, is what truly makes one a monk, though the two are related. Thus, this chapter will strive to answer the question, What is a monk? To that end, an etymological study will be followed by examples from the patristic and early medieval Christian tradition that talk about what characterizes the monastic person.

In his groundbreaking Der Ursprung des Mönchtums, Karl Heussi writes that though there is a Christian ascetic impulse going back to the New Testament, the “constituent element” of earliest Christian monasticism is found in withdrawal from the world. This conclusion is called into question by Christoph Joest when he says that Heussi’s conclusion “is a projection onto a movement that at the time was more fluid and diverse.” Though the beginnings of the institution of monasticism cannot be traced to one moment of inspiration, it is clear that the origin of the Christian monastic impulse is found in the Scriptures. However, though the impulse is found in the Christian Scriptures, they did not give to the Christian tradition a word by which to identify those whom we now refer to as monks. The terminology was worked out later by those living what we now understand as the monastic life.

The earliest evidence for the use of the word μοναχός in reference to the institution of monasticism comes from texts dated to 323 and 324 CE. The first is a papyrus contract recording the sale of a house to a monk (μ[ονα]χῷ), and it can only be assumed that this “house” would be for the purpose of a monastic community. The latter papyrus records a petition made to the Praepositus Dioscorus Caeso by Isidorus, who had been badly beaten by two men, Pamounis and Harpalus, and might have been killed had it not been for the monk Isaac (Ἰςὰκ μοναχοῦ) and the deacon Antoninus (Ἀντωνίνου διάκονος) walking by and breaking up the brawl. Since Isaac’s title is used with such casualness, it must have been a title known by the authorities, suggesting that it was somewhat common among fourth-century Egyptians. Joest suggests that “this term and the way of life it describes must have become familiar and accepted some time before the incident. This would take us back to at least the end of the third century.” Furthermore, that Isaac was even walking by Isidorus’s property suggests that he was not a hermit who lived far beyond society and, according to E. A. Judge, also that he was “not a monk from a cenobitic monastery.”

Not much more can be said about this passing reference to the monk Isaac.

What is important to notice, however, is that by the first quarter of the fourth century the word μοναχός was known well enough that it did not require an additional word of explanation. Further, monks seem to have lived in such a way that they had (at least on occasion) interaction with others. In the century ahead the word μοναχός took on overt theological connotations.

The use and history of the Greek word μοναχός is well known and well documented. Eusebius of Caesarea (d. ca. 340) is likely the first ecclesiastical author to use it. In his commentary on Psalm 68:6 (“God settles the solitary in a home”), written circa 330, Eusebius compares the five Greek versions of the text found in the Hexapla. Among these Greek versions, four divergent words are used for “solitary”:

”And this (giving the monachói a home) was his (God’s) first and greatest provision for [hu]mankind, because they are the front rank of those advancing in Christ. However, they are rare. This explains why Aquila calls them monogeneîs, likening them to the only-begotten Son of God. According to the Septuagint translation they are monotrópoi (living in one way) and polutrópoi (living in many ways), who do not shift and change, but hold to the one way that leads to the pinnacle of virtue. The Quinta called them monodzonói because they live alone and gird themselves. … All of them live their lives in solitude and chastity, they, the precursors of whom were the disciples of our Savior. To them he [Jesus] had said: ‘Take no gold, nor silver in your girdle.’”

These μοναχοί are few and far between, but they are at the forefront of spiritual advancement, following the narrow road to virtue by way of living alone and girding themselves (i.e., living sexually chaste lives). Thus, by the mid-fourth century Eusebius knows enough about the μοναχοί to describe their lifestyle, suggesting that though rare they are common enough to be known by a bishop in Caesarea. Moreover, he knows that there are organized bodies of monks (τάγμα) akin to the orders of widows and orphans in the fourth-century church.

Eusebius’s main description of the μοναχοί is that they live alone and are sexually chaste. Regarding the question of chastity, Françoise Morard writes that “Μονόζωνος, μονήρης, ἁγνός here are synonymous terms and refer quite explicitly to the state of the chaste life and celibacy.” Yet as Judge notices, “Eusebius makes no attempt to draw out celibacy as the guiding principle of monasticism. He is concerned to use the various renderings to show that μοναχοi are ‘single-minded’ in a general moral sense (which includes chastity).” And it is this insight that sets the stage for later discussions of what it means to be a monk. Yes, chastity may be an aspect of it, but it is not necessarily the central aspect. Rather, monks in the mid-fourth century were primarily a group of men (akin to female virgins and widows, who were recognized as unique ranks in the first century C.E.) who shared a common vision of the Christian life. They were not just celibates but shared a common mind. In the words of Joest, “These monachói are not simply ‘alone’ in the sense of being unmarried, but they were people who have turned their hearts completely to God. They have oriented themselves unwaveringly toward one single cause.” He continues, “We can see that during the first centuries Christians considered someone called monachós to be a person who was focused exclusively on God with his innermost heart and life, who lived unmarried by himself and essentially renounced personal property.” It is this singular focus on God from the heart that continues to receive attention in subsequent literature.

Excerpted from The Monkhood of All Believers by Greg Peters, ©2018. Used by permission of Baker Publishing BakerPublishingGroup.com.