Home Resources Books Seeing What Is Not There 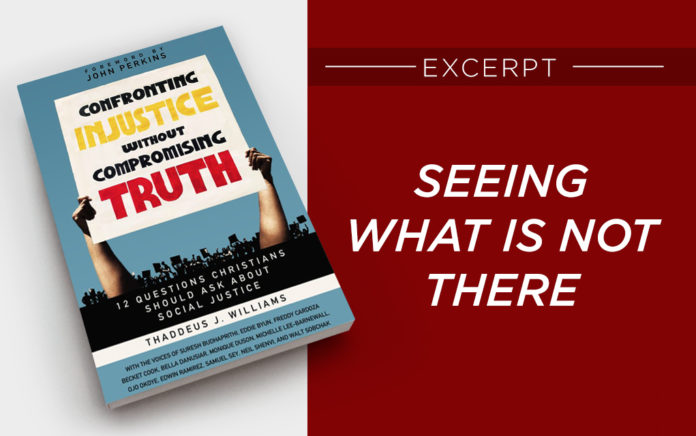 Excerpted From
Confronting Injustice Without Compromising Truth
By Thaddeus Williams

The Bible is clear. There is real oppression in the world. There is a big difference between believing this truth and downloading Tribes thinking as our mental OS. One helpful way to tell the difference is to honestly ask ourselves, “How do we process evidence that oppression may not be the best explanation in this or that case?”

When oppression—a true insight into some things—becomes the way of seeing most things or all things, then our story of the world ceases to be a grand story. Just as our tycoon couldn’t really see a beach, he could see only dollars and cents, so we likewise lose our ability to see the world when we can see only oppression.

Take the hot-button issue of the gender pay gap. If I process the world through Tribes thinking, then I am left with one and only one interpretation—sexism. That totalizing answer forbids all kinds of important questions. Does the gender pay gap have anything to do with women voluntarily leaving the workforce or going part-time for a season because many find the prospect of raising babies to be more worthwhile than decades of overtime office drudgery? Could a gap exist because men, on average, are more disagreeable than women, and disagreeableness is a documented marker of negotiating bigger paychecks?

Is it relevant that, in many fields, women make more than men when numbers are adjusted to account for overtime hours? Could the gap have 10 or 20 or 100 other contributing factors? Are we allowed to seriously ponder research into these factors, or should we simply write off the researchers as privileged members of the he-man woman haters club?

My point is not that factors other than sexism explain the gender pay gap.

My point is that if our minds are programmed by Tribes thinking, then the question itself—“Do factors other than sexism help explain the gender pay gap?”—will likely never cross our minds. If the question does arise, then our mental OS will kick in and quickly suppress it. Why? Because, by the logic of Tribes thinking, the very act of questioning the sexist story of the pay gap is to commit the unpardonable sin of siding with the oppressor groups over the oppressed. If someone else poses the question to us, then our mental OS stores them away in our mental files under S for sexist, M for misogynist, or P for patriarchal oppressor. Those who do not accept Tribes thinking can be dragged into the trash bin for permanent deletion. The Tribes mindset trashes not only any meaningful relationship with that person but also any hope of meaningfully thinking about that person’s perspective. In short, it makes us both closed-hearted and closed-minded.

I am hyperbolizing, but only slightly. In just the last week, the children’s show VeggieTales has been criticized as racist for having colored vegetables with different accents play villains. The playground game of dodgeball has since been denounced at the annual Congress of the Humanities and Social Sciences as “miseducative” and a tool of “oppression” because it “reinforces the five faces of oppression.” Behind such headlines, though laughable to some, there is serious insight into how our psyches work.

We are talking about a well-documented phenomenon that psychologists call “concept creep.” Like spilling ink into a tub of water, a concept expands outward in all directions until the entire tub is clouded. One valid way of seeing something spreads into the only way of seeing everything. Concept creep is how someone can become so cloudy headed that they deconstruct VeggieTales as racist propaganda. Concept creep is how J. R. R. Tolkien’s The Lord of the Rings can be read as racist Eurocentrism, despite the author’s vocal antiracism.

Sociologist Melanie Dupuis in her book Nature’s Perfect Food: How Milk Became America’s Drink argues that “by declaring milk perfect, white northern Europeans announced their own perfection.” When a totalizing view of the world grips our minds, we experience things that are often not there. We start seeing racism in vegetable cartoons, tasting white supremacy in a glass of milk, hearing sexism in a holiday jingle, feeling oppression in the impact of a dodgeball, and smelling homophobia as it wafts from our chicken sandwiches.

Concept creep is particularly common in Social Justice B. It assumes that questioning sexism, racism or any other evil -ism as the best explanation is to side with the oppressors against the oppressed. This is exactly backward. If we care about ending actual sexism, then we should welcome the question of how much of the gender pay gap can be laid at the feet of actual sexism. Otherwise, we aren’t fighting the real problem, but shadowboxing our own ideological projections. The extent to which we shadowbox our ideological projections of the problem is the extent to which we trivialize the victims of real sexism and racism. By diverting our finite injustice- fighting energies in every direction all at once, Tribes thinking unintentionally marginalizes the already marginalized.

Calling most everything racism hurts the victims of actual racism. Calling most everything sexism hurts the victims of actual sexism, and so on. Mechanics who care about cars and their owners, not merely trying to fleece their customers, will do everything in their power to ask questions, run diagnostics and get down to the real problems. Mechanics who simply dump oil into every car without taking a serious look under the hood will create more broken-down cars and stranded drivers on the roadside. Maybe the problem is a worn timing belt, a busted transmission or a dead alternator. Actually fixing problems requires more than one-dimensional diagnoses. Asking unpopular questions and openly gathering and assessing the facts is one of the most loving things we can do for our oppressed brothers and sisters. Contrary to popular opinion, questioning whether and to what extent sexism, racism or any other antibiblical -ism is the real problem is siding with the oppressed.

From Outreach Magazine  Why We Need Sexual Discipleship

Yes, doing so is risky. You will not win any virtue awards or popularity contests. Online mobs are ever poised to pounce. They may call you names. They may flag you for hate speech and get your social media accounts deactivated. The question is, do we take the Bible’s commands to truly execute justice seriously enough to endure the online mobs?

My point is not to deny the reality of racism, sexism or economic exploitation. It is simply that caring about justice requires a commitment to truth. We can no more separate truth from justice than we can subtract one side from a triangle and still consider it a triangle. The extent to which Tribes thinking predetermines answers to hard questions is the extent to which it obscures truth and unintentionally leaves more people broken. If we are afraid to ask tough questions with open minds, if we equate asking hard questions with racism, bigotry and sexism, if we aren’t willing to follow the evidence wherever it leads, then we should ask ourselves, “What do we care about more, loving the oppressed in truth or marching to an ideological beat and saluting the onlooking culture so it does not brand us with a scarlet T, R, I, B, E, or S?”