Home Resources Books The Need for Love in Our Political Action 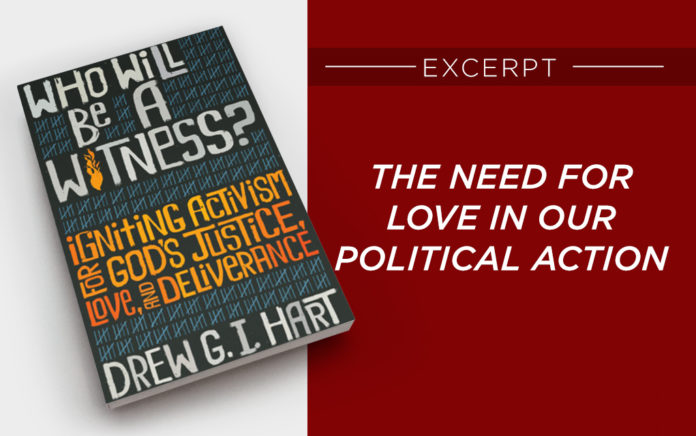 The difficult ways our faith must shape our politics

Excerpted From
Who Will Be a Witness?
By Drew Hart

On multiple occasions, I have stood before Christian gatherings delivering unwanted words. It was particularly acute because of the administration in the White House. Present for many people were the expected pent-up anxieties from our corrosive partisan climate and the national scandals happening in the administration. When I defined racism as organizing our society according to the logic of racial hierarchy, the crowds were still with me. When I went further and explained that they too were complicit in racism, and that they had consciously and unconsciously allowed race to organize their lives in relation to their relationships, networks, geographic residence, faith communities, schools and narratives of others, the audience was (mostly) with me. When I exposed the whitened Jesus that replaced the Jesus described in Matthew, Mark, Luke and John, or elaborated on how Christendom and colonialism continue to shape the logics and habits of the church today, and when I called them toward counterintuitive solidarity with oppressed people in the way of Jesus, overwhelmingly, people were with me. I have witnessed standing ovations, responses of lament, commitments to study and learn more and first steps toward taking local action through organizing efforts, all from my challenges. But a metaphorical ankle always gets turned and sprained on one specific topic. With each syllable proceeding from my mouth, I witness visceral discomfort, sometimes shock and responses that reflect people working through cognitive dissonance. These responses are usually in reaction to when I share the most deeply Christian message imaginable, the call of laboring in love in response to their political enemies.

From Outreach Magazine  Try This: Neighborhood Party Planning With a Purpose

Typically, Christians have shallow insights on faithful and effective strategies for social change. Believers often take sides about whether we need to “change laws” or “change hearts.” It is a fact that changing laws eventually leads to changes in many people’s views. No one is going to suggest that abolishing slavery or passing Civil Rights Acts hasn’t significantly changed the lived experiences of many Black people and other people of color in this nation. Those policy changes, with enough time, influence masses of people. Only the most corrosive and hard-hearted of Americans defend slavery today and would reintroduce it if possible. When you change the rules of the system, and hold people accountable, they actually live by those changes, and create new habits over time. Policy change doesn’t make everyone believe the same thing, but some form of change will come. At the same time, when people’s views adapt to policy changes, it doesn’t mean they have adopted a truly righteous perspective. Those who practiced slavery mutated their views for a new era and went on to justify neo-slavery through convict leasing, peonage, chain gangs and exploitative sharecropping arrangements under newly legislated Black codes and a Jim Crow social order. Anti-Blackness still held hands with most white churches like two fifth graders having their first crush.

The 20th century is a testament to the power of changing legislation and why, simultaneously, that is not enough. After civil rights legislation took root in the 1950s and ’60s, a new backlash arose, such as the prison industrial complex. A change of policies began making an immediate change in our society. However, something more is needed for deeper social transformation that policy can’t accomplish. When we keep track of the people directly harmed by newly invented death-dealing legislation, as well as the people who “know not what they do,” we must reorient our discipleship back to the heart of the gospel of Jesus, which requires loving our neighbors and enemies concretely.

From Outreach Magazine  12 Questions Christians Should Ask About Social Justice

Excerpted from Who Will Be a Witness?: Igniting Activism for God’s Justice, Love, and Deliverance by Drew G. I. Hart, ©2020 Herald Press. All right reserved.