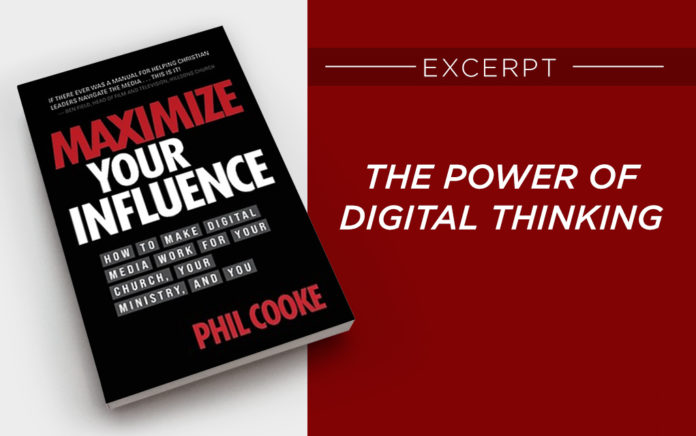 In a cluttered world, simplicity and clarity are what get people’s attention.

Excerpted From
Maximize Your Influence
By Phil Cooke

In 2020, when the COVID-19 virus caused churches to be temporarily closed, we experienced a dramatic change in the way most pastors and church leaders viewed media. For many, it had been an “add-on” or something that was “nice but not necessary.” A surprising number still felt that ministering to people online or through media wasn’t really “ministry.” In fact, LifeWay Research reported that before the crisis, 41% of churches had never offered any worship services or other resources online at all.

But within a week, things dramatically changed.

It’s no secret that reaching a congregation, community or media audience in today’s distracted and disrupted world is a real challenge. Although we have more channels for reaching them than ever before, those very channels slice up the audience, making it more difficult than ever to actually connect.

That’s why today it takes more than a high school kid with a video camera, a social media director or a graphic designer to communicate your message. Whatever you do in media—build a website, produce a video, launch a marketing campaign, publish a book or whatever—understand that each of those elements are part of a much bigger story and strategy. In today’s distracted world, where people are being overwhelmed with communication and media messages, anything you create has to be part of a bigger, multi-platform strategy to maximize those opportunities.

Oddly enough, most churches try to communicate too much—largely because they’re thinking of themselves, and not the audience they want to reach.

In a cluttered world, simplicity and clarity are what get people’s attention.

Certainly many organizations and visionary leaders have much to share, but in today’s hyper-competitive world, most people respond to too much information by shutting down and turning off. So it’s essential that we streamline the message and focus on what matters from the audience’s perspective.

There’s no point in creating the best podcast ever produced if your audience is somewhere else. That’s why finding the right platforms are so important for connecting with your audience.

These days, a great number of leaders and teams recognize the power of media, but don’t understand the best way to leverage that power. There was a time when sharing a message meant standing on a soapbox and talking to people passing by, preaching in a pulpit, or printing a book or newspaper. But today with an almost endless number of media options, making the right decision about the what, when, where, how, and why of your message can be the difference between success and failure.

COMMUNICATION IS NOW A TWO-WAY CONVERSATION

Perhaps the single most important principle to understand about digital media is that it’s a two-way conversation. Most leaders today grew up on a one-way world: preaching, traditional advertising, education, media—all were one-way conversations. Growing up, I couldn’t interrupt my pastor’s sermons, or talk back to a TV commercial. But in the world of digital media, the tables have turned. Today, a housewife in Omaha can create enough momentum through social media to bring down a major corporation.

Oddly enough, this new two-way conversation is remarkably similar to the method of worship during the days of the Early Church. Scholars have discovered that active participation and interruptions by the audience were common during worship. Church members spoke extemporaneously and out of a present burden, rather than from a set script. In fact, there’s no indication that Old Testament prophets or priests gave regular speeches to God’s people. Instead, the nature of Old Testament preaching was sporadic, fluid, and open for audience participation.

But when the oratorical schools of the Western world encountered the Christian message, they made Christian preaching something vastly different. Oratory tended to take the place of conversation. The greatness of the orator took the place of the astounding event of Jesus Christ. And the dialogue between speaker and listener faded into a monologue.

That’s not to say that preaching or proclaiming the gospel isn’t important, but it does indicate that today’s digital technology is actually giving us the capability to recover many of the styles and ideals of the early Church. The two-way conversation that began in Jerusalem became a one-way conversation with the influence of Greco-Roman culture; and now in the digital age, we are once again rediscovering the power of dialogue over monologue.

In the digital world of today, those who simply preach or teach without regard to the way the audience understands and responds will simply be ignored.

Excerpted from Maximize Your Influence: How to Make Digital Media Work for Your Church, Your Ministry, and You by Phil Cooke. Copyright 2020. Used by permission.