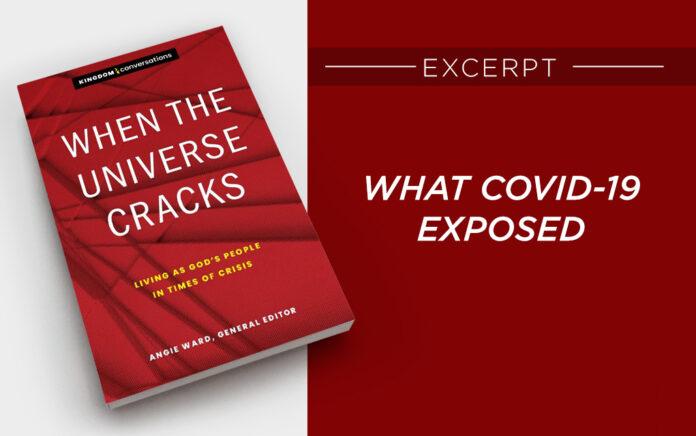 The church must equip cross-cultural, reconciling and justice-oriented disciple makers.

When the Universe Cracks

The pandemic that impacted millions and took the lives of hundreds of thousands in 2020 did not keep people from going into the streets to protest injustice. It did not bring civility to or suspend a presidential election. It did not stop big-time collegiate and professional sports from crowning champions. It also did not bring people together. Instead, COVID-19 exposed the worst of many people. Militia groups invaded government buildings, angry individuals who felt their rights were being infringed on went into stores and restaurants refusing to wear masks, and politicians blamed the opposing party for the extent of the crisis.

But what about the Christian church? For many Christians, there was a frightening feeling that though the world was marching on in some ways, the church was closed. COVID-19 was able to halt the most visible expression of what it means to be church: the experience of worship within a building. Though many churches transitioned to online weekend worship experiences and midweek teachings and connections, many attenders were panicked with the thought of not being able to “go to church.” The pandemic exposed a spiritual fragility within the church of the United States. It exposed the reality that the church in the United States is more addicted to going to church than being the church in a mission field of ongoing crisis.

The pandemic also exposed the allegiances that distract the church from its real purpose. The church may proclaim its purposes as evangelism, discipleship, and local and global missions, but the crisis exposed ongoing allegiances to the structures and systems of this world that compromise the church’s ability to function as a sneak preview of the Kingdom of God. The racial unrest that arose once again, in spite of a pandemic, exposed another weakness of the church: The church of the United States still remains a majority homogenous or racially segregated church. This impacts the ability of the church to serve as a transformative and reconciling force amid a significant portion of the nation hitting the streets demanding racial justice. This is especially a problem for the evangelical church.

Evangelicalism is not seen broadly as an innovator when it comes to diversity, multiethnicity, justice, and beloved community. How can this be, with what seems to be a commitment to multiethnic church planting and an embrace of racial reconciliation? The answer lies in a conflicting history within evangelicalism of seemingly making a commitment to reconciliation and justice while at the same time promoting and profiting from a White American conservative, nationalistic, and supremacy framework of Christianity. This Whiteness I am referring to goes beyond an individualistic understanding or identity based on the color of one’s skin. Whiteness is a collective understanding that describes those moving from European immigrant status into the dominant culture within a racialized society. Some today who are the descendants of this journey may not even see themselves as White, but simply as American. Yet, this Whiteness is real and shapes a social framework. This framework lifts up a mythology of White Christian innocence while presenting a revisionist motif which reduces the historic impact of colonialism, slavery, Jim Crow segregation, and the subordination of women.

Evangelicalism also has a history of doing ministry in a way that places individual or personal evangelism and discipleship above advancing the kingdom of God toward both individual and systemic transformation. This is coupled with a social engagement limited to the issues of a prolife position (which is itself limited to issues pertaining to life in the womb); marriage between one man and one woman; a preservation of the current State of Israel; and maintaining a majority of politically conservative judges on the Supreme Court. The preservation of these values within evangelicalism becomes the major roadblock for greater missional credibility in the areas of justice and reconciliation. In their book Divided by Faith: Evangelical Religion and the Problem of Race in America, Christian sociologists Michael Emerson and Christian Smith present some of the problems evangelicalism has faced in this area in recent years and in a more distant past:

Because evangelicals view their primary task as evangelism and discipleship, they tend to avoid issues that hinder these activities. Thus, they are generally not counter-cultural. With some significant exceptions, they avoid “rocking the boat,” and live within the confines of the larger culture. At times they have been able to call for and realize social change, but most typically their influence has been limited to alterations at the margins. So, despite having the subcultural tools to call for radical changes in race relations, they most consistently call for changes in persons that leave the dominant social structures, institutions, and culture intact. . . . Evangelicals usually fail to challenge the system not just out of concern for evangelism, but also because they support the American system and enjoy its fruits.

Emerson and Smith reveal a juxtaposition when it comes to evangelicalism’s journey with justice and reconciliation. There are two personalities within evangelicalism, or what Joseph Evans describes as a “double consciousness within Whiteness.” This is a White privileged version of the double consciousness that W. E. B. Du Bois speaks of in relation to African Americans— a persistent pressure to live in the tension between two distinctly different realities, identities, and value systems.

This double consciousness is one manifestation of the historic and present spiritual crisis impacting the mission of the church. This spiritual crisis at the same time provides an opportunity to rediscover who the church is to be. When surrounded by crisis, the church can reclaim the power, authority, and resilience of the church of the first century—which, though surrounded by crisis, could not be stopped in its mission and purpose. There is an opportunity to understand the sovereignty of God within social crisis and also to rediscover participation in the Great Commission, in spite of whatever social crisis occurs.

The great commission is the call on the church to make disciples of all nations. In 2 Corinthians 5, Paul calls on the members of the church to serve as ambassadors of reconciliation, carrying its message and embodying its ministry. This should inform how the church is able to march on and not be paralyzed amid either a virus- based or a racial-based pandemic. The church must find its identity outside of a transactional and building-dependent ecclesiology in order to move toward a more prophetic and apostolic ecclesiology of equipping and releasing cross-cultural, reconciling, and justice-oriented disciple makers.

Excerpted from “Crisis While the World Marches On” by Efrem Smith, chapter 3 of When the Universe Cracks: Living as God’s People in Times of Crisis, edited by Angie Ward. Copyright ©2021. Used by permission of NavPress. All rights reserved. Tyndale House Publishers, a Division of Tyndale House Ministries.