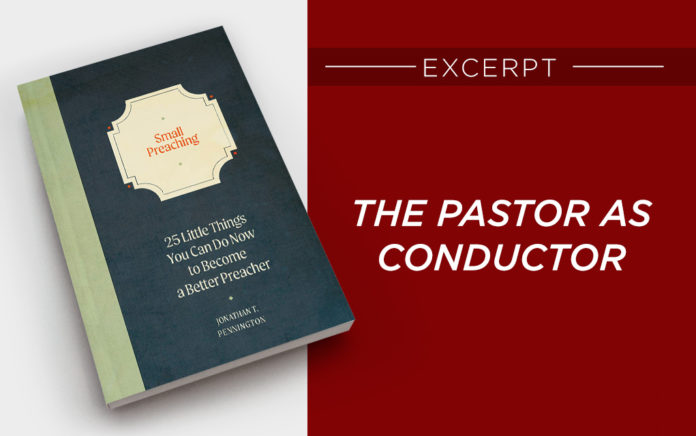 For those not trained in the world of classical music, it can be hard to understand and appreciate the role of an orchestra conductor. Of the hundred-or-so performers in a modern symphony, the maestro is the most honored—he or she is pictured on all the posters and receives the grand applauding entrance and ovations. Yet the conductor seems to do the least work of all. Conductors play no instrument and sing no notes but instead wave their hands wildly around, telling everyone else what to do.

What does a conductor really do? Going as far back as ancient Greece, we know of one Pherekydes of Patrae who used a golden staff to lead a group of some 800 musicians, keeping them together in time as they performed. Today, a large modern orchestra could not function—or at least not very well—without a maestro, and the best orchestras are recognized as the best largely because of their conductors. This is because the conductor leads, guides, unifies, and shapes the whole orchestra, without playing a single note during the concert.

A group of scientists studied the relationship between the conductor and musicians, analyzing the pattern of a conductor’s signals by attaching infrared sensors to both the conductor’s baton and the violinists’ bows. They found that different conductors shaped “sensorimotor conversations” between the orchestra and themselves that were visually different, and these differences correlated to the power of the music. The more experienced conductors created music that was noticeably more aesthetically pleasing. Maestros matter.

So what does this have to do with pastoring and preaching? Very much. The pastor’s role can be helpfully compared to that of the conductor, with preaching as analogous to the performance. The good conductor prepares, listens and leads. So too the pastor.

Prepare. Even though an hours-long orchestra performance may require sweat and energy from conductors, this is only the smallest part of what conductors actually do. Most of the conductor’s time is given to preparation for the concert.

Conductors have spent years mastering at least one instrument themselves and becoming deeply acquainted with them all—strings, brass, woodwinds, percussion, vocals. The conductor is the master interpreter of a complex musical text, and this interpretation requires research that is often rigorously academic. This includes studying the time period of the music, the biography of the composer, and how others have interpreted and performed the piece. As one expert has observed, “Like all the great mysteries, the mystery that is music only comes from huge amounts of hard work.”

So too the pastor. The Sunday morning sermon—the word proclaimed—is simultaneously an incredibly important single moment of the church’s life and the smallest part of it. The pastor’s preparation is what makes the preaching moment what it is. This preparation includes a lifetime of study of both Holy Scripture and human experience. Both academic labor (past education and weekly study) and pastoral care (living with and loving real people) are the necessary preparation for conducting the weekly service.

Listen. Maybe it is surprising to learn that a big part of what makes a great conductor is practiced and attentive listening. Have you ever seen what a conductor’s score looks like? The other musicians are following along with their own printed notes; the conductor is looking at everyone’s parts simultaneously on a massive musical score. And he is listening to all of them, detecting and directing them to work together. As author Tom Service notes, the conductor becomes the focal point, the “lightning rod of listening,” so that “the players and the conductor can become something bigger than all of them—than all of us—at the same time as feeling fully realized as individuals.”

So too the pastor. The message delivered and the advice given are important, but they will only be authentic and effective if they are first rooted in attentive listening to the music that each person can and does contribute to the whole. When pastors try to lead and preach without first and continually listening, they become disconnected and often take the dangerous road of heavy-handed authoritarianism to preserve their position. Instead, powerful pastoring and preaching starts with aware listening, becoming the conduit used by God to listen to and speak with God’s people.

Lead. Only after preparation and listening can a conductor lead. This leading is essential to the function of the whole orchestra because the maestro keeps everyone in time together through a unifying vision, an interpretation of the piece of music that is coherent and directed. Playing music is more than hitting the right notes. Musical performance involves interpretation and expression that vary by player and instrument. The conductor provides the necessary shared vision that brings together a diverse group of experts and individuals so that they can create complex music through the harmony of diversity while maintaining a coherent voice.

So too the pastor. The church is full of a wide variety of people, and this should be celebrated. It is precisely the diversity and differences among individuals that enable health, vitality, and beauty. The good pastor and preacher will lead these individuals toward not monophonic blandness but a shared contribution to the world that is shaped by the pastor’s (God-given) vision. Leading like a conductor looks like directing diversity into harmony.

The apostle Paul writes that God has given teachers to the church “to equip God’s people for works of service, so that the body of Christ may be built up” (Eph. 4:12). The pastor/conductor is the leader, providing instruction and shaping vision. But the goal, and the evidence, of good pastoring/conducting is not the preaching performance but the effect—powerful music that adds beauty to the world.

And this is also the source of life for the pastor/conductor. As Benjamin Zander observes, the power and life of conductors are not in the noise they make but in their crucial role in empowering and directing the noise, in enabling others to sing and play.

Preaching is not the only way the pastor leads, but it is the most visible and consistent way. The good preacher will remember that every sermonic performance is more than the content of the biblical text. Every sermon is an opportunity for the pastor to conduct his congregation well through preparing, listening, and leading.

Excerpted from Small Preaching: 25 Little Things You Can Do Now to Make You a Better Preacher by Jonathan T. Pennington (Lexham Press, 2021). Used by permission.