Home Resources Books From Father to Son: The First Letter From Eugene to Eric Peterson 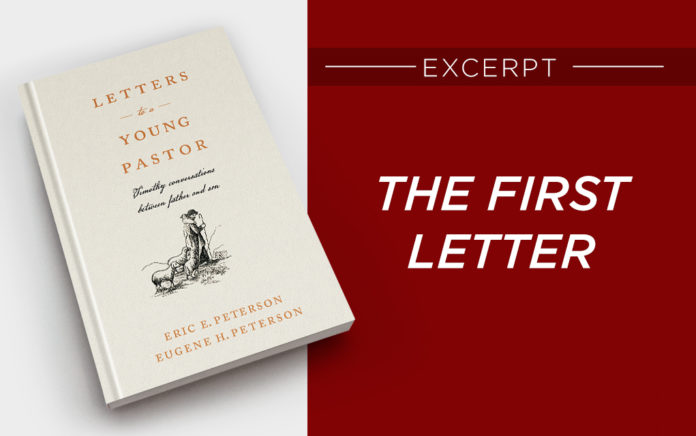 Excerpted FromLetters to a Young PastorBy Eric Peterson and Eugene Peterson Dear Eric, I can’t tell you how pleased I’ve been since you suggested that I write these letters to you, reflecting on our common pastoral calling. (Jan is too!) And I’ve been writing and rewriting (in my head) this first one ever since your […]

I can’t tell you how pleased I’ve been since you suggested that I write these letters to you, reflecting on our common pastoral calling. (Jan is too!) And I’ve been writing and rewriting (in my head) this first one ever since your telephone call, trying to get it right. And I can’t. I guess I’m thinking I’ve got to come up with something like Paul to Timothy and Titus. And I can’t—so this is what you get—just your old dad, trying to make sense of what we’ve both been given to do.

I think what strikes me most forcibly as I go over this is how different your world is from the one I grew up in and tried to learn how to be a pastor in. And in the light of that, realizing how context-specific pastoral work is: There is not much that can be generalized and passed on from one generation to another. The substance, of course, is the same—prayer and the Scriptures, obedient love and the holy sacraments, honest preaching and teaching. But the details—and pastoral work is almost nothing but details—are so different that practically everything has to be worked out from scratch, on the job. People’s expectations, their views of what is involved in marriage and parenting and their attitudes toward work and jobs, music and worship, the use of money and nature of commitments—all of these things and more are not totally different, but just enough so that leading people into a life of worship and discipleship requires paying attention to all these details so that we don’t impose a spirituality on them from without but develop it from within.

Something, for instance, as simple and common (now) as the Internet throws a monkey wrench into the works by almost totally depersonalizing knowledge, reducing it to a cataract of mere information. This reduction of knowledge to information has always been possible, and the forces that exacerbate it have been growing ever since Guttenberg, but now, with the prevalence of quick access to virtually everything there is to know, the link between person and knowledge is, if not destroyed, at least weakened to an extent that is most troubling. Knowledge is less a personal exchange and more a commodity than ever before. And that makes it more difficult to preach the gospel and teach the Scriptures and direct personal growth than ever before—more difficult for you, I think, than for me.

I don’t think for a minute this is new, but the scale is new, and it is that scale which affects pastoral work. The area where I notice it most is in what people unconsciously look for in their pastor: The pastor is not one to whom we look for knowledge or truth; the pastoral office is perceived in emotional terms—feelings of reassurance and comfort, a source of inspiration and good cheer, a figure of advocacy.

One of the great elements of distinction in the pastoral office is that it is personal. Everything—administration, teaching, healing, counsel—is represented in a named person who people can listen to and touch, speak the pastor’s name and expect the pastor to speak their name. But when this personal dimension is then reduced to merely functional and emotional areas, the implicit authority of the office is diminished greatly.

I’ve reflected on this in the matter of Melody. This might not be the best example, since I don’t know the details. And if I have it wrong, just censor this out. But my outsider impression is that Melody was brought into your ministry with a great deal of personal attention; early misunderstandings were worked out in a lot of detail; there was a great deal of investment in relationship as you took her into your confidence in what the leadership of worship involved and what working with those worship leaders means. Lynn worked hard at this, setting herself aside and working for a common good. And then the whole thing falls apart because she understands her basic place in that worshiping community as a matter of status and money, and these function entirely apart from personal relationships. The most telling detail for me was in her threat to hire a lawyer and take the matter to a civil court. That kind of conflict is not so unusual, but I think the volatility, the quick fuse, the seemingly total absence on her part of relationship with you and the congregation—I think that is a sign that assumptions have changed considerably. The overwhelming context out of which she is working has to do with function and status and money—depersonalized categories. As we live in a world of the Internet (and related phenomena), this kind of thing happens more and more.

From Outreach Magazine  Outreach Resources of the Year: Leadership

The good news is that the pastor in the congregation is probably in the most effective place in the world to counter these cultural demons. The act of Sunday worship, the access to homes, the almost total lack of commercial and commodity considerations in your work, the cultural “uselessness” of your work—all these put you in an enviable and strategic way of life to develop a community in which people discover and develop lives that are lived in response to the God who reveals himself in Jesus and works by the Holy Spirit to customize every part of the revelation of salvation and holiness to the uniqueness of each person.

Well, this is some of what I’ve been thinking about on Christmas morning as I am appreciating the way you pursue your calling and praying for wisdom and grace for you this week.