Home Resources Books What Needs to Change, and How? 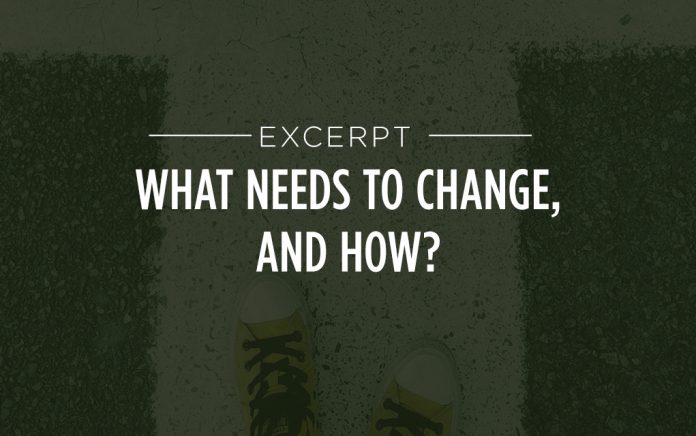 Most churches perceive the need to change, but they don’t know how.

The United States is home to an estimated 350,000 church congregations. These churches provide a local place for worship, community and witness for those who identify as Christians. But experts project that between 30 to 40% of these churches—that is, at least 100,000—are likely to close in the next 30 years.

The average size of a U.S. congregation is 186 people. But that figure is misleading. If you examine the median size, meaning the point at which an equal number of congregations are larger and smaller, you’ll see that it is just 75. (This metric measures those who regularly attend Sunday worship.) About half of all congregations in the U.S. are small churches, yet they comprise only 11% of all those people attending church. On the other hand, congregations with 350 or more members, which make up only 10% of all congregations, are filled with 50% of those typically attending church on Sunday.

Over half of all Protestant congregations—including mainline and evangelical—sense that they need to change, and they are worried. The Hartford Institute for Religion Research completed a comprehensive study of U.S. congregations in 2015. It included questions about congregational change. Twenty-one percent agreed with the statement, saying, “We need to change to increase our vitality and viability, but the congregation does not seem to realize it and/or doesn’t want to make the necessary changes.” And another 32% said, “We are slowly changing, but not fast enough or significantly enough.”

Congregations able to make changes are more likely to experience higher vitality. The Hartford survey of U.S. congregations included a series of questions asking them to assess their own vitality, spiritually and organizationally, and then the survey related this to a congregation’s ability to embrace change. Of those most positive about their proven capacity to continually change, adapt and improve, 62% reported having high congregational vitality. In contrast, only 11% of those congregations not able to recognize or sufficiently embrace change described themselves as having high vitality.

What, then, do congregations perceive as the barriers to change? Here again, evidence from the Hartford study, as well as from other sources, is revealing. One-third of congregations cite the “lack of unifying and energizing vision or direction.” That figure rises to 40% among congregations of 250 or more in attendance. Another 30% of congregations say they lack “workable, concrete models that provide realistic but vitalizing alternatives to the status quo.” The other most frequently cited barrier was insufficient resources of money and energy—a barrier highlighted strongly by smaller congregations.

From Outreach Magazine  Pastorpedia: Inspiring Creativity in the Church

So, the picture that emerges is a startling one. Most congregations in the U.S. recognize their need for change. Further, it’s clear this is linked to their ability to become or remain vital, both spiritually and organizationally. Additionally, they have a sense of what they need, and the barriers to such change.

But they don’t know how to change.

More often than not, anxiety and discontent drive the perceived need for change. While these are necessary preconditions to change, they alone do not create sufficient energy for necessary missional change. Such change compels a church to place its commitment to participate in God’s ongoing mission in the world at the heart of its life and identity. Anxiety and discontent are a place to begin, but moving to a process of spiritual discernment focused on the question of God’s preferred and promised future is necessary to reveal both what needs to change and how those changes can be made.

Recently a group of church leaders in a major European denomination were gathered at the invitation of the theological faculty of one of the denomination’s major historical universities and the provider of theological education for most of its clergy for many centuries. At the table were chief executives of national church organizations, midgoverning judicatories, local churches—including some large, independent (so-called free church) leaders—and members of their parliament, and thought leaders in and out of the academy. They admitted, when asked, that this was an extremely rare meeting since their only purpose was not to conduct church business but to explore how churches change and how they need to be a part of that change process.

They were gathered not so much to act out of their hierarchical work roles but as perceived leaders who wanted a chance to explore in a relatively safe space the challenge they were feeling. Simply put: They knew that most of their local churches needed to change. Further, they knew that a critical mass of local church leaders felt the same need to change, but most of those local church leaders were unclear about what exactly needed to change and how that necessary change would happen. They agreed that greater church attendance or “more young persons” was desirable but that their absence was more a symptom than a cause. Even the “successful” free-church pastor who had significant ties to American megachurch leaders admitted that his local church was outside the norm and that he was not prepared to give a formula for what needed to change or how. Each of the attendees had ideas, hints, hunches and some models of change that they had experienced or at least taken a workshop on or read about in a business, change-management setting. They all spoke of “spiritual” challenges both personally and organizationally, and had various resources. What distinguished this meeting from those of other similar groups that we have experienced in the past 30-some years was a genuine recognition and willingness to say in the presence of their fellow church leaders: We know we face a life-and-death crisis; we know we need to change; we know we don’t know exactly what needs to change or how to do it.

Notice there are three very distinct attitudes and beliefs present in the group gathered. First, they know they face a life-and-death crisis. Second, they believe they need to change and that some change could make a difference. Third, however urgent the sense for change is within a leadership group, they believe they don’t know exactly what needs to change or how to do it. We have often found only parts of these three prerequisites present in churches that say they want to change. Often, churches substitute big, hairy, audacious goals or catchy tag-lines that use contemporary phrasing, believing this will motivate the change they need. These tactics seldom generate the kind of energy necessary to make missional change.

Churches must change the way we change. Meaningful change, whether at congregational or denominational levels, is arduous and frequently elusive. Often motivated more by anxiety than discernment, efforts at change become driven by survival rather than empowered by missional purpose.

The transformative, missional change so deeply needed by the church in our time, both local and global, will not come through quick fixes, catchy slogans, inspiring weekend speakers and neat formulas wrapped in consulting fees. The change the church needs comes slowly and patiently. It takes time, because culture is being changed. It takes practice, because new habits are being formed. And it takes trust, because a familiar, comfortable past must be left behind before the future can be fully discerned. But this is, after all, the nature of Christian faith.