Home Resources Books God Commands Us to Preach His Word 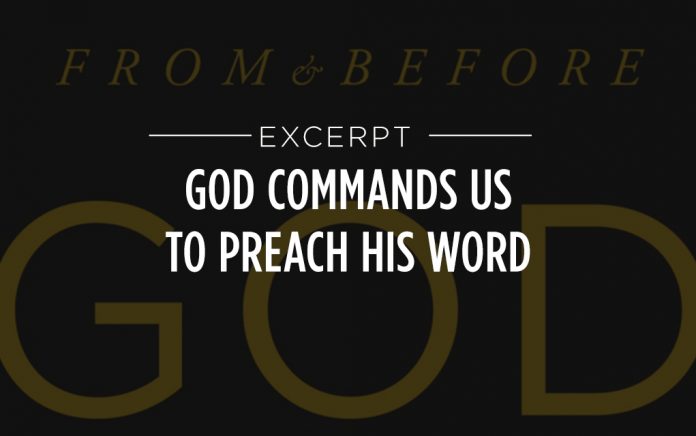 Preaching insights from the story of Moses

Preaching is not in fashion. It even has a bad reputation. When some people hear the word “preach,” the image that comes to their minds is that of a mother speaking without a pause, reprimanding her daughter until she cries out, “Please mom, stop preaching at me!” The implied meaning of the word for these people is “a highly recriminatory, never-ending lecture that generally results in driving the listeners out of their minds.”

Although many people keep visiting churches every week, I suspect that not many of them show up expecting a good sermon. Feeling like they are a part of a community is what attracts some. Others come because they enjoy the worship music or the available ministries, especially for young adults and children; and it is even possible that some may be looking for answers to their personal problems through the therapeutic sermons preached today from many pulpits. None of these things is necessarily bad in and of itself—indeed, the Bible commends the sense of community we feel at church, the available ministries, etc. But coming to church to listen to a monologue in which pastors expose the Word of God does not sound very attractive. That’s why there is a need for a theological anchor to keep the ship of our ministry firmly established in accordance to the calling we have received from God as ministers of the gospel.

In the previous two chapters, we examined two of the hooks of this theological anchor: 1) God has spoken, and he accomplishes his work through speech; 2) the God who has spoken continues to speak to us today through his written Word. The third hook, which we will examine in this chapter, is that God commands us to preach his Word to make his voice heard publicly. Making his voice heard publicly is why preaching has been a priority for the people of God throughout the entire history of redemption.

The Priority of Old Testament Prophets

The history of preaching is, in some way, as old as human history. We know from the epistle of Jude that Enoch, the seventh from Adam, prophesied against the ungodly people of his generation (Jude 14–15); and the apostle Peter, in his second letter, refers to Noah as a “herald of righteousness” (2 Peter 2:5). Moses, however, is the one who has the privilege of being the first preacher whose ministry is broadly described in Scriptures. When God called Moses on Mount Horeb, he gave him the task of returning to Egypt to free his people from slavery, speaking in his name.

Of course, that plan was not on Moses’ agenda for that stage of his life. A long time had passed since he had fled from Pharaoh’s palace and been forced to live the lifestyle of a lowly shepherd in Midian. Forty years living among sheep and without the opportunity to have a conversation with someone who shared his intellectual level had decimated Moses’ self-confidence. Although Stephen describes him as “mighty in his words and deeds” (Acts 7:22), Moses was convinced that his opportunity to become a hero had been buried in Egypt the day he ran away from Pharaoh’s wrath.

“But Moses said to the Lord, ‘Oh, my Lord, I am not eloquent, either in the past or since you have spoken to your servant, but I am slow of speech and of tongue.’ Then the Lord said to him, ‘Who has made man’s mouth? Who makes him mute, or deaf, or seeing, or blind? Is it not I, the Lord? Now therefore go, and I will be with your mouth and teach you what you shall speak.’ But he said, ‘Oh, My Lord, please send someone else.” —Exodus 4:10–13

Moses panics because of the nature of the work he was being commanded to do. But God makes Moses see that if he created the mouth, he also has the power to make it function properly. However, Moses continues to shun his responsibility until God grows angry. Yet God is still gracious to him; instead of casting him aside, he makes up for Moses’ lack of confidence by sending his brother Aaron:

“Then the anger of the Lord was kindled against Moses and he said, ‘Is there not Aaron, your brother, the Levite? I know that he can speak well. Behold, he is coming out to meet you, and when he sees you, he will be glad in his heart. You shall speak to him and put the words in his mouth, and I will be with your mouth and with his mouth and will teach you both what to do. He shall speak for you to the people, and he shall be your mouth and you shall be as God to him.” —Exodus 4:14–16

It is necessary to highlight God’s strategy for the tremendous task he is placing on the shoulders of Moses and Aaron. They were not commanded to form secret insurgent cells to rise against Pharaoh, nor to negotiate a bilateral agreement that would be satisfactory for both sides. They were not sent to Egypt as revolutionaries or negotiators, but as heralds of the Most High God.

Further on, in Exodus 7:1, the Lord says to Moses: “See, I have made you like God to Pharaoh, and your brother Aaron shall be your prophet.” Moses had authority over Pharaoh because the God of heaven had given him the task of speaking in his name. Aaron’s role in this strategy was to transmit the divine message just as it had been directly revealed to Moses. Although God recognizes that Aaron was an excellent speaker, his eloquence did not give him the right to transmit his own message to the people or to touch up the words Moses received from God. Aaron was simply a herald.

This passage is important because it reveals to us the nature of the labor of the prophet in the Old Testament. His primary function was not to predict the future, but to faithfully transmit the message of God to the people. The phrase “the word of the Lord came,” or a variant of it is repeated more than 3,800 times in the Old Testament. Prophets were the preachers of their generation, calling the people to turn from their sins to God so they would not reap the consequences of their rebellion.

Thus, preaching played a supremely important role in the old covenant. Prophets communicated the words of God, in the name of God, to people. And this methodology did not change in the new covenant.

Excerpted with permission from From and Before God by Sugel Michelén. Copyright 2019, B&H Publishing Group.