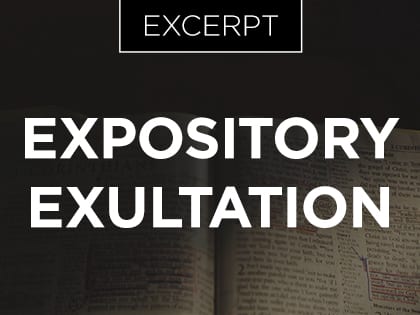 To preach well, we must be committed to expend the mental effort to understand the Scriptures and exposit them for our hearers.

HUMAN THINKING AND DIVINE ILLUMINATION ARE NOT ALTERNATIVES

Good preaching and good hearing involve good thinking. The apostle Paul makes clear that the effort of human thinking and the gift of divine illumination are not alternatives. They belong together. He explains to Timothy, in one sentence, how these two work together: “Think over what I say, for the Lord will give you understanding in everything” (2 Tim. 2:7). We make the effort to think. God freely gives understanding. Both-and. Not either-or.

Some preachers swerve off the road to one side of this verse or the other. Some stress the first part: “Think over what I say.” They emphasize the indispensable role of reason and thinking, and then minimize the supernatural work of God in making the mind able to see and embrace the glory of truth. Others stress the second half of the verse: “The Lord will give you understanding in everything.” They emphasize the futility of reason. Then their preaching veers into emotional manipulation or mysticism.

But Paul will not be divided between studious meditation and supernatural illumination. For Paul it was not either-or, but both-and. “Think over what I say, for the Lord will give you understanding in everything.” Notice there the word “for.” It means that God’s design for the preacher—as he prepares and as he preaches—is that the divine gift of understanding be the basis of our effort to gain it by thinking. His supernatural giving does not replace our natural thinking; it encourages and supports it. “Pursue understanding by thinking, because the Lord gives understanding.” This is true for the preacher as he speaks, and for the people as they seek to understand what he says.

Paul does not say, “God gives you understanding, so don’t waste your time thinking over the Scriptures.” He does not encourage us to substitute prayer and faith for thinking, but rather to saturate our thinking with prayer and faith. Benjamin Warfield, the great theologian at the beginning of the twentieth century, said, “Sometimes we hear it said that ten minutes on your knees will give you a truer, deeper, more operative knowledge of God than ten hours over your books. ‘What!’ is the appropriate response, ‘. . . than ten hours over your books, on your knees?’”

From Outreach Magazine  Kyle Idleman: Don't Give Up

On the other hand, neither does Paul say, “Think hard over what I say because it all depends on your rational powers, and God does not illumine the mind.” No. He emphatically makes God’s gift of illumination the ground of our deliberation. He makes God’s gift of light the reason for our effort to escape the darkness of not understanding. “Think over what I say, for the Lord will give you understanding.”

THINK FOR THE SAKE OF A MATURE, THINKING PEOPLE

So preachers should cultivate in themselves and in their people the habit of rigorous thinking about Scripture. A pastor’s preaching should be marked by lucid thinking, and over time he should draw his people into the habit of thinking carefully about the meaning of Scripture. When Paul told Timothy, as a pastor, to think about the apostolic teaching (2 Tim. 2:7), he did not mean that the people don’t have to—as if the job of the pastor was to do all the thinking for the people. Paul said to the whole church, “Do not be children in your thinking. Be infants in evil, but in your thinking be mature” (1 Cor. 14:20).

A people with powers of mature thinking about biblical truth is one of the goals of pastoral ministry. Paul said in Ephesians 4:12–14 that pastors should aim to equip the saints for the work of ministry, for building up the body of Christ, until we all attain to the unity of the faith and of the knowledge of the Son of God, to mature manhood, to the measure of the stature of the fullness of Christ, so that we may no longer be children, tossed to and fro by the waves and carried about by every wind of doctrine, by human cunning, by craftiness in deceitful schemes.

In other words, one of the marks of immature thinking is instability. The people are “tossed to and fro” by winds of doctrine. Why? Because they have not been equipped to be mature in thinking. So the preacher, in his preparation and preaching, and the people, in their meditation and listening, should be thinking carefully. Their minds should be engaged with the care that catches mistakes in reasoning and that exults in clear, compelling, logically consistent presentations of the truth.

In pleading for clear, compelling, rigorous thinking in preaching, I am aware that I am swimming against the cultural current that minimizes thinking and reasoning in favor of spectacle and visual impact and sound bites and musical atmosphere and emotive persuasion. All over the world “logic on fire”—which is how Martyn Lloyd-Jones defined preaching—is being replaced with fire—or sparks—without logic. Many preachers expend little mental effort to do the difficult work of digging into the language of a passage of Scripture to discover how it actually works to make its point.

From Outreach Magazine  7 Signs You're Stuck in the Christian Bubble

Then there is a similar neglect of the mental effort to create a message that shows the people, with compelling logic and authentic passion, what the text means and how it applies to their lives. This minimizing of rational effort is part of the cultural air we breathe. We have been breathing it for many decades. And we are not the better for it.

Right thinking, clear logic, the valid use of reason and the respectful, honest handling of words are utterly crucial in loving people. They are an indispensable window into truth, a bulwark against totalitarian abuses of power, a friend of the poor and a rock of stability in the quicksand of randomness, emptiness and oblivion. Preaching that fails in the mental effort to dig into the thinking of the biblical authors, and then turn their meaning into a clear, logically consistent, existentially urgent message, dishonors those authors, depreciates the inspiration of Scripture and falls short of equipping the saints to discern the deceptions of false doctrine. Drawing people into right thinking in preaching really matters.

The Bible, which is the basis of all preaching, is a book. And books must be read to be understood. And good reading means good thinking. There is no getting around it. Reading for maximum understanding is hard mental work. Therefore, the preacher’s task involves enormous efforts of thinking week after week, year after year. And either we do it well or we do it poorly. I am pleading for preachers to embrace this task, and do it well.