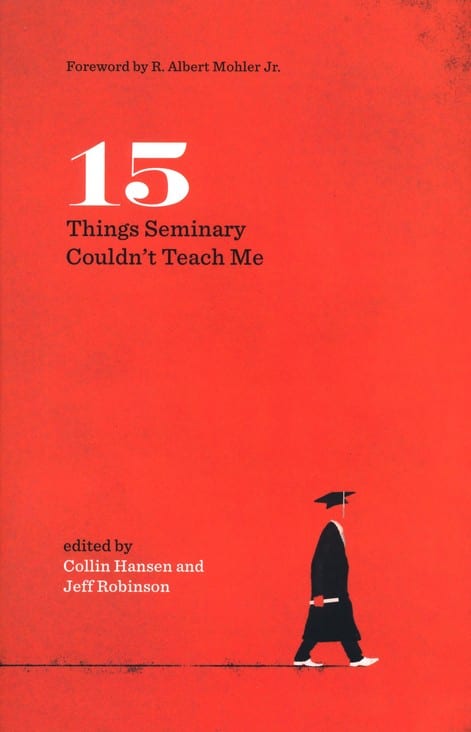 THEY SAY: “A seminary education is valuable, but many new pastors become discouraged when the realities of their first call don’t line up with their expectations.”

THE PROGRESSION: Fifteen different contributors—including Daniel Akin, Jeff Higbie, Matt McCullough, Juan Sanchez and Vernon Pierre—pen one chapter each in this quick-moving book.
Topics covered include what to do when no one will hire you, how to handle conflict, how to lead leaders, what to do when your church is dying and how to shepherd your wife.

Bridging the gap between seminary training and real life, this book will help every person laboring in the trenches of pastoral ministry.

A DISCUSSION WITH JEFF ROBINSON,
lead pastor of Christ Fellowship Church in Louisville, Kentucky, and senior editor with The Gospel Coalition.

What was the motivation for putting this book together?

Ask a longtime pastor to identify the most difficult years of his ministry and he’s likely to say, “Those first five years.” And he will likely tell you they were difficult because he had unreasonable expectations. He’s also likely to tell you he met with circumstances for which he was ill-prepared, even though he had studied theology and the Scriptures at a seminary or Bible college.

Statistical research bears this out: One study showed that nearly two out of three seminary graduates who enter pastoral ministry have exited permanently within the first three years. Other studies reveal different numbers (some worse), but with one voice all trumpet forth the same lament: Pastoring in the 21st century is all-out war and there are many casualties. There is a serious gap today between orthodoxy and orthopraxy among inexperienced, seminary-educated pastors.

In some small way, we want to minister to pastors who are in those first five difficult, confusing years, to let them know that the things they are experiencing are by no means unusual, but are part and parcel to pastoral ministry. We see this book—the first of a several-volume series aimed at pastors in their first five years of ministry—as a form of “preventive medicine.” We want to warn them about the dangerous waters ahead, so when they get there, they won’t be ambushed by things that lurk there.

Does this book pose any suggestions on how seminaries can improve to meet the needs of pastors when they confront the real world?

Our book is by no means intended as a broadside against, or even a critique of, seminary education. I cherished my time in seminary, serve as an adjunct professor at two seminaries today, and pastor a church brimming with young theology students. Collin serves on the advisory board for Beeson Divinity School and is likewise a seminary grad. Seminary is a must for every minister able to attend, but it never promises to make one a pastor. As such, there is not a sense in which we seek to “correct” what the seminary has or has not taught.

From Outreach Magazine  7 Things That Keep Leaders From Leading Well

The key word in the book’s title is the contraction “couldn’t.” Notice we didn’t say “seminary failed to teach me.” There are many biblically faithful seminaries that can provide the necessary tools for ministry the local church simply cannot. We’re saying “both/and” not “either/or.”

What was one of the most common piece of advice the contributors offered? Was there any advice you were surprised to find not listed?

I think the common theme among the writers is to stick with it, persevere where God has planted, even though it may be fraught with difficulty. Ministry is supposed to be that way—it’s a dangerous calling. Moses led a congregation that rebelled against him and wanted to return to slavery in Egypt rather than follow him as God’s appointed leader. Paul experienced opposition and suffering as 2 Corinthians makes abundantly clear, particularly in chapter 11 where he sets forth all the things that made him a faithful ambassador for Jesus Christ—they were all examples of his horrendous suffering on behalf of the gospel. It’s certainly true of our Lord Jesus Christ’s ministry—he endured the most profound suffering ever poured out on a human being both as a substitute for his people and as an example to his future heralds.

When we originally listed potential chapters, we had around 35 to 40. We knew a book with that many chapters would never fly, so there was much that got left on the cutting room floor. I think the one thing I wish we’d had someone to write on is the necessity of rest for the minister. There’s so much burnout today among pastors and there’s a whole passel of books being published encouraging pastors to rest and showing them why it’s more necessary than ever to take care of yourself spiritually, physically, and emotionally. That topic will be dealt with in one of our future volumes that’s being written right now.

What do you think is the No. 1 challenge facing churches today?

I think the No. 1 challenge for churches is the same in every age, and though there are issues unique to 2018, the main threat always lurking on the horizon are the Siren songs of worldliness and compromise. God has shown us very clearly that he intends to build his church by using the tools some might call the “ordinary means of grace”: faithful exposition of his Word, celebration of baptism and the Lord’s Supper, and prayer. That, along with on open display of the truth in missions and evangelism before a watching world is all a church needs to be “successful,” which, biblically speaking, is a synonym for “faithful.” God’s Word and his Spirit do not need our innovations or creations or our “help.”

We must proclaim his Word faithfully and watch it work just as Jesus puts it in the parable of the seed in Mark 4:26–29, where Jesus compares a gospel herald to the farmer who plants his seed in the ground, goes to bed, and it grows “and he knows not how.” God will grow his church. He has promised to do so. And he will so long as we are doing ministry that is faithful to his Word. We simply cannot improve on what God has already told us. I think the church needs to get back to that just as the Reformers called her to return to those things in the 16th century. I think the major challenge is to get ourselves out of the way, faithfully proclaim his Word, and have confidence that he will build his church.