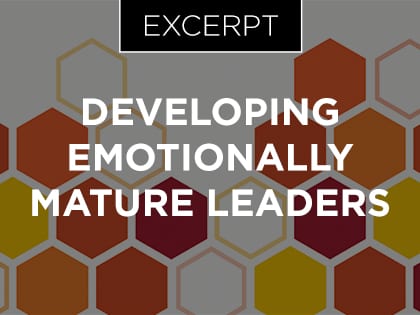 We tend to distrust our emotions, but being attuned to our emotions and those of our team is an essential component of leadership.

For too many Christians, their so-called relationship with God is void of any emotion. Instead, it’s all about checking the right boxes—fulfilling a list of dos and don’ts. This leads to a tired, unemotional numbness that is void of feeling on the inside that may explain why some have given up on their faith or on ever having a deep, moving faith. They’ve missed the emotional side of having a relationship with God. They don’t know how to love God and therefore don’t love him. This doesn’t have to be.

Many are suspicious of their emotions and tend to fear them. They associate emotions with weakness and vulnerability. Thus they attempt to divorce themselves from them and rely on them as little as possible. For men, this may be cultural as they associate emotions with the female sex whom they believe to be more emotional. Strength is found in being rational and intellectual. To be rational is safe; to be emotional is to be weak, out of control and thus vulnerable. Finally, a number of scholars and scientists, including Christians and even Christian leaders whom I refer to as Stoics, believe that emotions negatively influence reason and may result in distorting biblical truth.

Every leader suffers some degree of emotional dysfunction or impairment, varying from extremely minimal to acutely extreme. None of us has arrived. We all walk with a limp, and some limp more than others. Understanding emotional intelligence can help us discover where we as leaders limp, to what degree, and what we can do about it.

Emotional malfunction or dysfunction in one form or another can often serve as the driving force behind a leader’s desire to make a difference, to achieve success. We hear this a lot in Christian circles. An aspiring leader can be heard to say, “I want to make a difference for Christ!” or “I want to impact the world for the Savior!” We must ask, Why do you want to make a difference? What’s your motive? What’s behind that? We say that we want to make a difference. Is this true or are we trying to prove something to somebody, such as a parent. For example, from time to time a male leader may confess in private, “I’ll show my dad that I can accomplish something with my life in spite of what he thinks.” The ministry problem is that far too often these motives go undetected.

I believe that far too many leaders are not aware of their personality issues and the personal dysfunctions and emotions that drive them. They are “clueless.” Bradberry and Greaves write, “Despite the growing focus on EQ … only 36 percent of the people we tested are able to accurately identify their emotions as they happen.” They didn’t take a course on emotional maturity in seminary because none was offered. No one has ever taken time to confront them and make them aware of their issues. Consequently, they continue to make the same relational mistakes over and over but aren’t aware of them. Most often this results in failure of some sort, and the person simply moves on to another ministry and repeats the same mistakes. Becoming aware of and learning about the dysfunctions that have created their issues can enable leaders to address those arenas and to some degree even mitigate though not eradicate their potential negative effects in their exercise of leadership.

Scripture provides a full, rich theology of the emotions that addresses many of the dysfunctions and the emotions that drive us to achieve and can be helpful to leaders in their efforts to understand themselves and address some of their issues. For example, Romans 6–8 guides the believer in how to break the power of sin over his or her life. Ephesians 4:25–32 addresses a number of emotions, such as anger, and how to deal with them. Scripture also brings emotional issues to light in many of the characters of the Bible, such as Abraham, Moses, David, King Saul, the Old Testament major and minor prophets, the apostles, and Paul. The writers of Scripture—especially narrative—do not hesitate to show the bad as well as the good, knowing that a live model fleshes out the importance of emotionally competent leadership.

In our ministries we should address organizational concepts such as mission, vision, values, and strategy on a routine basis—perhaps as often as several times a week. Rick Warren encourages pastors to cast the church’s vision at least once a month if people are going to get it.

However, we face relational matters daily and several times per day. Hardly a day goes by that we don’t relate to someone in some way that involves the emotions. And this can go well or poorly, depending primarily on our emotional intelligence. If we fail to cast the church’s vision, it will catch up with us eventually over time. But if we fail to relate well with people at the emotional level, there will be immediate repercussions.

Emotional intelligence is the glue that holds people together on a team. It’s the difference between good and poor team performance. Goleman writes: The glue that holds people together in a team, and that commits people to an organization, is the emotions they feel. . . . How well leaders manage and direct those feelings to help a group meet its goals depends on their level of emotional intelligence. Resonance comes naturally to emotionally intelligent leaders. Their passion and enthusiastic energy resounds throughout the group.

In the church world we see the importance of teamwork in such areas as ministry staffing and missions. One of the major factors I’ve observed that distinguishes successful from unsuccessful churches is the ministry staff and their willingness to work well together. I refer to this as their teamwork glue. In exciting, growing churches, almost always there is a strong staff team who work closely together behind the scenes and who don’t care who gets the credit for their successes.

One of my disappointments in my training international church planters is their inability to work together—their lack of ministry glue. On several occasions I would spot them on campus where I would inquire about how their churches were progressing only to learn that they had imploded and were no longer in business. What did I learn? The missing ingredient was teamwork glue.

Emotionally intelligent leaders are emotionally self-aware and able to recognize emotions—theirs and others—as they happen. This is a vital skill for the ministry of leaders because it helps them obtain a clear understanding of their strengths and weaknesses without any obstruction.

In addition, healthy leaders are able to perceive emotions as they arise in response to various situations—good or bad. As a result, they are better able to address any problems and handle any future complications.

What is the benefit of emotional awareness and management if you are unable to clearly express your thoughts? Individuals with emotional intelligence are most often good at effective communication. They are able to clearly convey directions and know what to say to inspire and motivate followers. An important skill for leaders, communication can be a deciding factor in whether the team listens or not.

Leaders with emotional intelligence are tuned in to the emotions of others, and they pick up on what is going on around them. They are able to empathize with others by putting themselves in the person’s shoes and giving and receiving helpful feedback. This is a critical skill for leaders who work closely with a team. If the leader is unable to empathize with and relate to his followers, he or she will find it difficult to win their respect and loyalty.

There are two equal but opposite extremes or mistakes in reacting to people’s emotions. One is being overly sensitive or too concerned about how people feel. People at this extreme worry about how they impact others emotionally. This is empathy on steroids, and it results in being controlled by others and their emotions and moods whether that’s their intent or not. Ultimately, it leads to an emotional status quo or “don’t rock the boat” mentality.

The other extreme is ignoring or devaluing people’s emotions. The intellect wins the day, and little value is placed on the role that emotions play in our lives. This is the stoic approach that discounts the emotions, an approach of both Christian and non-Christian Stoics. Through our intellect, we can logically, rationally win the argument (the battle) but lose the war because the opinion of people has not changed. People in the academy attempt to operate using their intellect. People in the church tend to operate more on their emotions or how they feel. We would be wise to merge the two.

In every ministry, there will be conflict. It comes with the territory, and Christians are not exempt. These conflicts can threaten or disrupt the church, its ministries, and its leadership. However, leaders with emotional intelligence are equipped to handle conflicts and provide biblical resolution.

Emotionally astute leaders can quickly address any disagreements that arise between congregants, the staff, and a board. In conjunction with the above skills, leaders can use their emotional intelligence to develop a more effective ministry community.

What is it about a leader that makes for excellence in performance?

Most believe it is knowledge of one’s area of expertise. Thus we spend years in school, attend conferences and lectures and read lots of books to increase our knowledge. Others salute technical skills or competence in one’s field of endeavor whether ministry or business. Indeed, these are all important. However, Goleman writes, “But when I calculated the ratio of technical skills [competence], IQ [knowledge] and EQ [emotional intelligence] as ingredients of excellent performance, EQ proved to be twice as important as the others for jobs at all levels.”

They do matter, but mainly as “threshold capabilities”; that is, they are the entry-level requirements for executive positions. But my research, along with other recent studies, clearly shows that emotional intelligence is the sine qua non of leadership. Without it, a person can have the best training in the world, an incisive, analytical mind and an endless supply of smart ideas, but he still won’t make a great leader.

Great leaders lead through the emotions. They move us. They ignite our passion and inspire the best in us.

5 Things to Remember About Worship