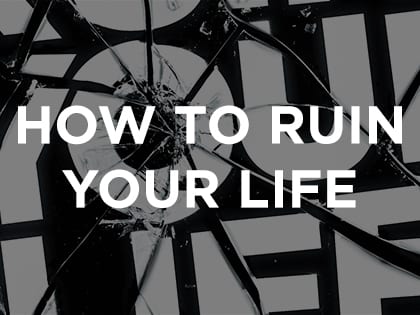 Before the final visible explosion, there are many hidden implosions that erode a leader’s moral foundation.

Excerpted from
How to Ruin Your Life
By Eric Geiger

There is a restaurant in Nashville that was once one of my favorite spots for lunch. I realized one day, in the middle of a meal, that I was sitting in the same booth I sat in years earlier with a husband, father and ministry leader I admired. His passion for the Lord was contagious. There was joy in his eyes, the kind of joy that makes some want to ask the server for whatever he is having but makes those of us who have walked with the Lord think, “This guy has spent time with Jesus today.” His love for people was tangible. How he interacted with the server and others at the table was refreshing. But sitting in the same restaurant booth reminded me how much had changed in those few years as his marriage had fallen apart and his public ministry was now over.

I looked around the restaurant and saw another booth where another leader and I once sat and dreamed about the future. We planned a project that would serve people well, prayed together and talked about what the Lord was doing in our lives. But this leader is no longer leading either. With remorse and sadness, I looked at the booths where I previously enjoyed meals with authors and leaders I loved and respected, leaders that I felt loved Jesus more than me. Leaders who sat in those same booths are no longer serving him in the same way. Their stories, though far from over, have taken dramatic and downward turns.

I rarely eat at that restaurant anymore. The booths are not as comfortable as they once were. Instead they surface feelings of loss, regret and wondering what could have been different. Moments of gladness have been overshadowed by grief. Their sinful choices impacted more than just their lives as families, churches and countless others were deeply affected. The restaurant once reminded me of pleasant conversations, and now it reminds me of painful ones, of phone calls and meetings where I have learned that people I love have been disqualified, at least for a season.

Disqualified. There is that word again.

I could easily write about a recent story of a well-known leader, coach, college professor or ministry leader who was removed from a position of influence because of disqualifying behavior, because of issues of character and integrity. However, the story would be old news by the time you read these words because there are always new stories as these implosions continually come to light. Competent and effective leaders in a variety of fields and disciplines forfeit their roles over deficiencies in their character. They were able to lead others but not themselves, able to grow an organization while their hearts grew cold. When a lack of integrity comes to light, leaders can be disqualified.

There is great pain in being disqualified. Maybe after submitting a resume for a job you have heard, “I am sorry. You just don’t meet our qualifications.” Or maybe you didn’t qualify for the college you dreamed of attending. Perhaps after throwing a few deflated footballs you received a call saying, “You are disqualified from some games,” and the agony of that call motivated you to go on a revenge tour all the way to the Super Bowl (Google Tom Brady if you are not qualified to understand this illustration). Regardless of the situation, being disqualified hurts.

I have been disqualified multiple times. As a child, I was disqualified in swim meets for scissor kicking instead of properly executing breaststroke. When you are disqualified, it does not matter how fast you swam, your time does not count. Your time is not even posted on the score sheet, only a “DQ” next to your name, and it doesn’t mean you’re getting Dairy Queen as a reward, but that you still don’t know how to swim correctly despite all the practice, coaching and lessons your parents paid for.

In elementary school some kids in my class got pulled into a new class for the “Gifted and Talented,” thus leaving me behind to do normal work while they enjoyed extraordinary activities for the extraordinary kids. I appealed to my mom who appealed to the school who allowed me to take a test in an attempt to qualify myself to wear proudly the “Gifted” title. I took the extraordinary test and confidently waited a few days for the results only to have my mother come in my room one night with the words, “No matter what son, I am proud of you.” I knew she was setting me up for a letdown. Turns out I was an ordinary kid and not qualified for the Gifted and Talented class.

In high school I was disqualified from representing my school at Boys State, a selective educational program for incoming seniors. After being chosen to represent our school, I was arrested with some friends after sneaking out of my house, stealing credit cards from vehicles and driving throughout the New Orleans area, where I grew up, buying beer to sell to our friends. It was absolutely sinful and idiotic and I deserved the call that said, “You cannot represent us. You are not invited. You have been disqualified.”

Before God, all of us were disqualified. There is a DQ next to every one of our names, next to every single one of us, from plumbers to poets to physicians to preachers. We are not nearly good enough. Even on our best days and in our brightest moments, we fall incredibly short of God’s holiness. To belong to him, one must be perfect, and we are not perfect, but terribly sinful. We have declared war against God and rebelled against his rule and reign. We don’t deserve to be in his kingdom and we cannot qualify ourselves to enter it. Actually, our attempts to qualify ourselves are offensive to God because we reveal we don’t believe him to be holy or appreciate his grace. If we think we can qualify ourselves, we have mocked him by lowering him to our level.

But God, in his great love and grace, qualifies us. He does for us what we cannot do for ourselves. If you are his, if you have received his forgiveness, he has qualified you. Though you won’t live perfectly today, he has declared you perfect. His perfect righteousness is now yours as all your sin was placed on him when he sacrificed himself on the cross on your behalf.

No matter your sin and your past, you are qualified because you are not the one who does the qualifying. He is the only one who can qualify you, and he has! The apostle Paul, in the first chapter in the book of Colossians, reminds believers in Christ of what Christ has done for us.

If his grace qualifies us, then why I am using this word “disqualified?” If he has declared those in him as qualified, who am I, or anyone else, to make the call that someone is disqualified? Why does a character implosion disqualify? It is a good question.

Disqualified is a sharp word. It has a definite edge to it. It isn’t soft or mushy or ambiguous. And though the word elicits a response, I don’t use it to do so. I use it to be clear. Organizations wisely expect their leaders to be men and women of character. They intuitively understand that people won’t follow leaders they don’t respect and trust. In the Scripture, the Lord gives clear qualifications for leading others in the church. The overseer must be above reproach, gentle and hospitable, not greedy, lead his family well and have a good reputation with outsiders. If there are clearly defined qualifications for leading, then one can be disqualified from leading others.

From Outreach Magazine  Pastorpedia: How Do We Honor Seniors and Church Veterans?

The disqualified word must not be thrown around lightly or haphazardly. It must be reserved for clear and consistent failures to exhibit the qualifications of leadership. It must not be based on rumor or conjecture. In fact, according to the Scripture, people within a local church should not accept accusations against their leaders unless multiple witnesses bring those accusations. And views on a blog or “likes” on a Facebook post do not count as multiple witnesses.

One can be qualified by his grace and disqualified to lead at the same time. To be disqualified from leading in no way contradicts the beautiful reality and glorious news that his grace qualifies us.

Disqualification for issues of character is always preceded by an implosion of integrity, by a leader falling apart internally before the ruin and rubble is seen externally. In some sense, all of us are leaders—as God has given humanity the privilege of stewarding this world and influencing others. And whatever God has given us stewardship over is deeply impacted when our lives implode.

How Do You Implode?

Demolition experts can also take buildings down from the inside. They can cause the building to implode. Except for the caution tape, the attack on the building is not obvious to onlookers. Everything looks normal on the surface, but inside the building a dramatic fall has been planned for weeks, even months. When the moment of implosion happens, it is fast and devastating.

I remember the first time I watched a building implode. I was a child and my father, who was an engineer, took me to a scheduled building implosion of the largest building at the chemical company where he worked. A horn sounded and in a matter of seconds, the building crumbled on top of itself. People cheered, chatted for a few moments and then got in their cars and drove away. Some people love to see a good implosion.

On the way home my father explained that the implosion took weeks of planning. While the implosion appeared rapid to the onlookers who were eager to see something fall, there was an intentional weakening of the foundation through a series of strategic and sequenced explosives. Explosive devices were placed at key foundational areas in the large building. They were lit in sequence, and when the building was weakened it simply caved on top of itself. As the structure beneath the surface failed, the building could no longer hold the immense weight and ruin was inevitable. Though the fall may seem fast to onlookers, ruining your life does not happen overnight.

Excerpted with permission from How to Ruin Your Life by Eric Geiger. Copyright 2018, B&H Publishing Group.