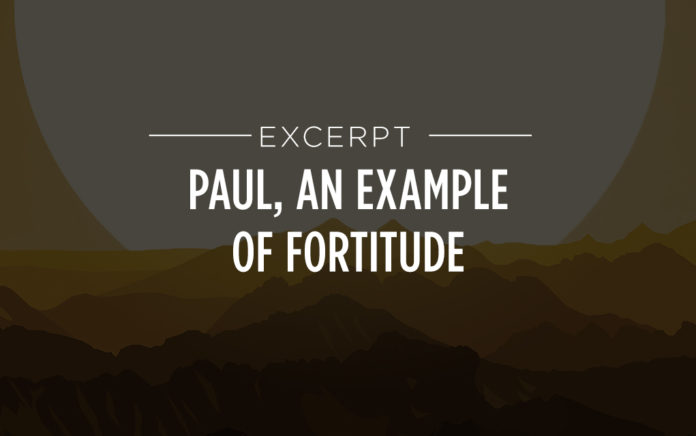 Paul’s thoughts on his suffering put our lives and faith into perspective.

Paul, an Example of Fortitude

My favorite book in the Bible is Philippians. The first time I read it, I was 14 years old and had recently heard the gospel for the first time. I knew I wanted to know Jesus and serve him, but I had no idea how to go about it. I started reading the Bible and quickly became confused by all the unfamiliar names and phrases, but when I got to Philippians, I felt as if I’d found the prize in a scavenger hunt. Aha! So this is how you do it! This is how to live like Jesus!

To understand Philippians, you have to understand Paul, the man who wrote it. As a young man from Tarsus, Paul (also known as Saul) had everything going for him. He was a Greek-speaking Jew and a Roman citizen during a time when Rome was the world’s superpower. He was an ultrareligious Jew who came from a well respected family and meticulously followed all the rules. He was well educated and skilled at tent making, which allowed him to find work anywhere. But he’d chosen to use his privileged position to mercilessly torment and abuse Jewish converts to Christianity (see Gal. 1:13–14; Phil. 3:6).

But one day as he was traveling to a town called Damascus, Jesus appeared to Paul in a vision and confronted him about his actions. After Paul experienced three days of blindness, God restored his physical eyesight and also gave him the ability to see spiritual things clearly (see Acts 9:1–19).

Paul’s immediate and lifelong reaction was to proclaim that Jesus is the Son of God. For the rest of his days, he used every ounce of his experiences—both positive and shameful—to add credence to his claims about Jesus. Paul explained in his own words why he didn’t shy away from any part of his life story: “I have become all things to all people so that by all possible means I might save some. I do all this for the sake of the gospel, that I may share in its blessings” (1 Cor. 9:22–23).

I think it’s safe to say that Paul endured more tough times than most of us ever will. You think you’ve had a hard life? In his second letter to the Corinthian church, he listed some of the challenges he’d faced. Paul …

• was flogged by Jews five times with 39 lashes.
• was beaten by Roman rods three times.
• was pummeled with rocks.
• was shipwrecked three times.
• was adrift on the open sea for a night and a day.
• traveled hard year in and year out.
• forded rivers.
• fought off robbers.
• struggled with friends and enemies.
• endured risky conditions in the city, in the wilderness and during storms at sea.
• was betrayed by people he thought were dear friends.
• served hard labor.
• was often lonely, sleepless, hungry and freezing cold.
• felt the constant weight of responsibility for supporting, training and encouraging all the churches.
• experienced deep desperation.

And this list was written just partway through his ministry! Paul’s words take on new meaning when we know what he went through. As he wrote the book of Philippians, he was between a rock and a hard place once again—this time shackled in a Roman jail cell. I’ve been inside the cave-like prison in Rome where Paul most likely sat as he penned this letter. Two thousand years later, it’s still incredibly depressing, even without the foul smell.

Paul wrote the short four-chapter letter to the Philippians under these conditions. You’d expect it to be overflowing with complaints. Bitterness. Fear. But no, against every set of odds in the universe, Paul was bursting with joy.

His friends had no doubt heard he was chained up in prison, and he wanted to be sure they understood the plain truth about his situation.

“I want you to know, brothers and sisters, that what has happened to me has actually served to advance the gospel. As a result, it has become clear throughout the whole palace guard and to everyone else that I am in chains for Christ. And because of my chains, most of the brothers and sisters have become confident in the Lord and dare all the more to proclaim the gospel without fear.

“It is true that some preach Christ out of envy and rivalry, but others out of goodwill. The latter do so out of love, knowing that I am put here for the defense of the gospel. The former preach Christ out of selfish ambition, not sincerely, supposing that they can stir up trouble for me while I am in chains. But what does it matter? The important thing is that in every way, whether from false motives or true, Christ is preached. And because of this I rejoice. Yes, and I will continue to rejoice.” (1:12–18)

Paul explained that they were looking at his chains all wrong! The only goal of his life, he reminded them, was to advance the gospel. It wasn’t just his top priority; it was the only one. And as a direct result of his imprisonment, the gospel was being heard by more people. Paul said in effect, “My chains are a huge win! My pain and limitations are so valuable because they’re enabling me to achieve my goal.”

When I first read this, I was blown away by Paul’s perspective. I still am, even as I write this. Let me be honest: While it’s easy to recognize the upside of other people’s limitations, I am nearly incapable of seeing the value of my own. Just like you and me, Paul had made plans. His missionary journeys and international church visits had to have involved a huge number of details. But Paul never lost sight of the overriding goal of his life. Instead of complaining about how his current situation prevented him from continuing with his plans to tell people about Jesus, he saw his imprisonment as a divine appointment. Paul knew what he was to do—share Christ’s story. He left it to God to decide to whom, where, when and how that would unfold. He trusted that God had him right where he wanted him.

Have you ever stopped to consider how many decisions in your life are dictated by fear? Fear of failure. Fear of shame. Fear of hurt. We try to manage our lives in such a way that we will avoid fresh hurt. The problem is that no matter how hard we try to avoid it, pain finds us. I appreciate that Jesus was straightforward about this, acknowledging, “In this world you will have trouble. But take heart! I have overcome the world” (John 16:33).

Paul’s jail sentence was a great thing for the prison guards because they got to hear all about Jesus. And his imprisonment is a great thing for you and me too! If Philippians had been written by a guy who was relaxing on a Mediterranean beach, it wouldn’t mean much to me. I’d think, Well, of course you’re happy. I would be too if I were in your sandals! But I have real problems going on in my life right now. Bills to pay, sick kids to care for, struggles to work out in my relationships … stuff you clearly don’t understand. And I’d close the book.

Seeing a clear picture of what Paul endured gives his testimony the weight of truth. This guy simply wouldn’t have been in prison if he wasn’t positive that the one who stopped him on the road to Damascus was the Son of the living God. His absolute faith and confidence in this Jesus had jettisoned every scrap of fear from his mind.

Excerpted from The Gift of One Day: How to Find Hope When Life Gets Hard. Copyright © 2020 by Kerry Shook & Chris Shook. Published by WaterBrook, an imprint of Penguin Random House LLC.