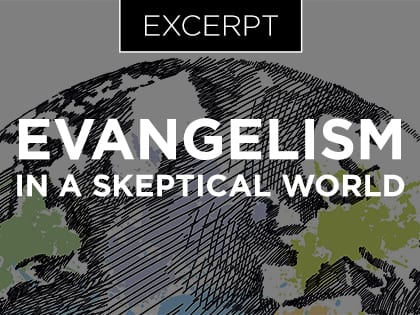 There are several reasons why trying to do evangelism alone might not be as effective as doing it with other Christians. Take a closer look.

Taken From
Evangelism in a Skeptical World
By Sam Chan

Imagine I told you this story:

”Last night, while my wife and I were watching TV, a UFO landed in our back yard. A green alien got out of the UFO and asked us to join him. So my wife and I got into his UFO, and he took us to his home planet, Jupiter. There he showed us around his home city. We had dinner with his family. Afterward, we got into the UFO and returned to earth. But when we got back, because of the space-time continuum, we went through a time portal, and only one second of Earth time had passed.”

Do you believe me?

Let’s say I tell you another story:

“Two thousand years ago, God sent us his Son, Jesus. This man Jesus was 100 percent God and 100 percent human at the same time. He was born from a virgin! While he was on earth, he healed sick people and raised dead people back to life. And then he died on a cross. If you believe this, he will take away all your sins and forgive you. But he didn’t stay dead. He rose again to life and is now in heaven. If you trust him, God’s Spirit lives in you right now. When you die, your soul will leave your dead body to be with Jesus in heaven. And one day, he will return and set up a kingdom on earth. And when he does, your dead body will rise from the grave and be reunited to your soul.”

Do you believe me?

To be clear, I’m not talking about the truth status (ontology) of my truth claims. I’m talking about the believability status (epistemology) of my truth claims. It may be true that a UFO landed in my back yard. It may be true that Jesus rose from the dead. But what I’m talking about is whether you believe these claims. What is the believability status of these claims? It is our plausibility structures that stamp certain claims as believable and other claims as unbelievable.

So where do we get these plausibility structures? They come from three main sources: (1) community, (2) experience and (3) facts, evidence and data.

Right now, most of us don’t belong in a community of trusted friends and family who have seen a UFO. Most of us haven’t had an experience of a UFO. Most of us don’t believe there are any facts, evidence or data to support my UFO story. But most of us do belong in a community of trusted friends and family who believe in Jesus. Most of us have had an experience of Jesus. Most of us believe that there exist enough facts, evidence and data to support the Jesus story. That’s why we believe the Jesus story, but not the Jupiter story. So which one—community, experience or evidence—is the most influential? More often than not, it’s community. We like to think the answer is evidence, but it’s not. If I said to you, “The UFO is still in my back yard. Do you want to come and see it?” would you come? Probably not. You couldn’t be bothered to make the trip because you would assume that it is a waste of time, convinced that I’m crazy. And let’s say you did come to check out the UFO. You see it and touch it. You’d probably say something like, “Nah, there’s got to be some other explanation,” or, “This is an elaborate hoax!” We dismiss evidence or we explain it away. Whether we like it or not, it’s our community of trusted friends and family that is most important in determining what we believe.

The Role of Community in Determining Belief

Our community—our trusted friends and family—has a powerful role in forming our beliefs. Our community also shapes how we interpret our experiences. Our community also shapes how we interpret facts, evidence and data. For example, in Australia, most Bible-believing, churchgoing Australians do not support an individual’s right to bear arms (to own and carry a gun). But in the USA, many Bible-believing, churchgoing Americans do support the individual’s right to bear arms. Let me be clear that I’m not getting into the gun debate here; I’m just using it as an example of how community is a large factor in the way we form beliefs. Both these Australians and Americans are Bible-believing, churchgoing Christians, but their different communities have shaped how they interpret their experiences and the facts, evidence and data.

As another example, right now in the Western world, most of us believe that women have a right to vote. But one hundred years ago, most people in the Western world, including most Christians, didn’t believe that women had a right to vote. Once again, community is powerful in forming our beliefs. As a final example, in Australia, most Bible-believing, churchgoing Australians are by and large in favor of government-funded healthcare. Australians are used to the idea that the government pays the bill for our hospitals. Most Australians also support rules that make it mandatory for bicycle and motorcycle riders to wear a helmet. This just seems normal for Australians. But in the USA, most Bible-believing, churchgoing Americans oppose government-funded healthcare. Americans are used to the idea that individuals should pay for their own bills and that taxes shouldn’t support the health costs of others. Most Americans would also think that bicycle and motorcycle riders should be free to choose for themselves whether to wear a helmet. It’s their head. They can do what they want. Besides, they will pay for their hospital costs if they have an accident, and not me! So let them do what they want. Once again, our community has a powerful role in forming our beliefs. Different communities with some of the same experiences will interpret them in different ways. Different communities with the same facts, evidence and data will interpret them in different ways.

Here is the key idea you need to grasp: people will find a story more believable if more people in their community, their trusted friends and family, also believe the story.

This is one reason why if we raise teenagers in a small town where the youth group is only three teenagers meeting together on a Friday night, those teenagers will find the Jesus story to be unbelievable. They’re the only schmucks meeting on a Friday night to worship Jesus while hundreds of other teenagers are having fun doing something else. But if we take the teenagers to an annual convention where they meet with ten thousand other teenagers who worship Jesus, suddenly the Jesus story becomes a lot more believable. Our teenagers will say, “Wow, we’re not the only ones who believe this.”

From Outreach Magazine  Can’t We Just Be Good Without God?

We Need to Merge Our Universes

So why are we spending all of this time talking about the importance of community and how it affects our plausibility structures? Because typically when we get fired up about evangelism, we go out solo. “I’m going to tell my friend about Jesus!” We decide it’s time to hang out with non-Christians and tell them about Jesus. So we join a book-reading club or a cooking class or a flag-football team.

Evangelism Is a Lifestyle Change

I realize that this example simplifies some things. Making friends takes time. Merging our social worlds may not be easy. I’m simply trying to make the point that this strategy requires a lifestyle change. It’s a bit like getting in shape. Typically, we make New Year resolutions to get fit, and we promise ourselves that we’ll run in the morning, sign up at a gym and change the way we eat. The problem with this approach is that we’re trying to add fitness to our existing lifestyles as an accessory item. Sure enough, our attempts at fitness fade and fail, sometimes by the first week of February. What is needed is a lifestyle change, not some activities that we add to our lives. We need to live a fit lifestyle, not a life with fitness added to it.

It’s the same with evangelism. Our usual approach to evangelism is to add some activity to our lives: maybe I’m going to try to tell someone about Jesus at lunch or I’m going to join a book club. Churches do the same thing by adding an event such as an outreach night to their calendar. But we need to change our lives so that we live an evangelistic lifestyle, not a life with add-on bits of evangelism. Churches need to do the same thing. When I worked full-time as a junior medical doctor, I shared hospital accommodations with three other doctors. We became friends and hung out together. None of the three professed to being Christian, and they certainly did not have a personal relationship with Jesus.

It took two years! That’s about how long it takes to form a network of trusted friends. That’s why I’m arguing for a lifestyle change, not just something we tack onto our lives. By the end of the two years, all three of my doctor friends started coming along with me to church. All three gave their lives to Christ. I still hang out with one of them, and he’s still walking with Jesus.

Taken from from Evangelism in a Skeptical World by Sam Chan. Copyright © 2018 by Samuel Chan. Used by permission of Zondervan. Zondervan.com