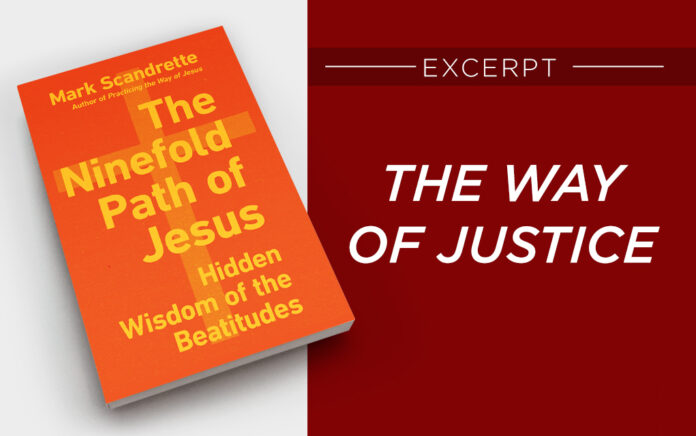 Excerpted from ‘The Ninefold Path of Jesus’ (IVPress)

Excerpt from
The Ninefold Path of Jesus
By Mark Scandrette

Be inspired by the words of the prophet Isaiah:

“Learn to do right; seek justice.
Defend the oppressed.
Take up the cause of the fatherless;
plead the case of the widow.”

Where is the struggle for justice happening now where you live?

In August 2014 the case of Michael Brown, a Missouri teenager shot and killed by police, polarized the United States. In the afternoon the not-guilty verdict was pronounced, my social media page blew up with comments supporting and criticizing the Black Lives Matter movement. That night at dinner our family talked about the ruling, and I made an offhand comment, “I’m not going to post anything about this on social media—that’s just slacktivism.” My daughter Hailey quickly spoke up,

“But Papa, if you have a voice you should use it to amplify the voices of the oppressed.”

Since I’m usually the one making dinnertime speeches, her words took me aback. We could hear the helicopters circling overhead ready to cover the demonstration forming at the subway station a few blocks away. I said, “Okay, I hear you—but if I’m going to say something, I want to speak from first-hand experience. Let’s listen and join in the cries of our neighbors.”

We left the table and walked to the station. Hundreds of our neighbors were gathered to lament the ruling, and we joined their chants and prayers. A young Black man spoke like an ancient prophet. Tears welled up in my eyes. This was faith in action, where it really matters, the divine name invoked on the streets, amidst pain.

In December I went to a gathering where leaders of color spoke about ways their families have been impacted by racism. A friend told me about a time he was speaking at a university and was mistaken for the janitor and asked to clean up a mess in the bathroom. Another friend told me she had just had the “driving while black” talk with her teenage son to help him stay alive when he is inevitably stopped by the police. My heart broke.

Two months later, while sitting in the living room with my kids, I heard gunshots. Around the corner our neighbor had been shot and killed by two undercover officers. Amilcar Perez-Lopez was a twenty-year-old undocumented immigrant who worked two jobs to support his family living in the mountains of Guatemala.

Police have a difficult job to do, but these particular officers made a series of mistakes that cost my neighbor his life—and then they lied about it. They did not clearly identify themselves and then physically overpowered Amilcar. In self-defense he pulled out a kitchen knife. When they drew their guns, he dropped the knife and turned to run. Startled, the officers fired six bullets into Amilcar’s back. They immediately blocked off the street, told onlookers “you didn’t see anything here” and went door to door, seizing cameras and cell phones. They had the body removed from the crime scene before the district attorney could conduct an investigation.

Within days I consulted a lawyer. I filed a statement with the Office of Citizen Complaints and participated in a faith-leader press conference on the steps of city hall. I went to Amilcar’s funeral, and we sent money to his family. We began hosting bilingual planning meetings with neighbors and helped organize vigils and marches covered by the media. A group of us held weekly prayer vigils for a year in front of the police station, pleading for the D.A. to indict the officers who killed Amilcar.

I spent many hours in meetings with the district attorney, speaking at police commission meetings, and attending federal justice department panels. I often wondered if our efforts were making any difference. Amilcar’s death was one in a series of police killings in San Francisco while the police department was under investigation for a racist text scandal. Eventually, the chief of police was forced to resign. Amilcar’s family received a settlement from the city. In 2019 the state of California passed legislation to reform use-of-force law, making it more difficult for police to shoot civilians with impunity.

From Outreach Magazine  The Tough Conversation All Churches Must Have

This was a step forward, though much more is needed. I believe that if that law had been in place earlier my neighbor might still be alive or at least the officers who killed him would have been held more accountable.

I regret that it took me so long to act in solidarity for racial justice and police reform. I have a voice inside of me that says, If I haven’t experienced it, it can’t be real and If I didn’t start it or can’t be in charge, then it’s not worth my time. I am not the public face of the efforts I’ve been part of. There are many other people whose faces should be seen and voices heard before mine. It’s my job to work behind the scenes, doing what I can, and making the struggle known to more people who look like me.

It’s easy to feel less urgency about changing unjust systems when they benefit us or we are insulated from the pain they cause. James, the brother of Jesus wrote,

“If anyone, then, knows the good they ought to do and doesn’t do it, it is sin for them.”

If we aren’t actively working for change on both personal and systemic levels, then we are complicit in keeping things the way they are.

The system is indeed broken, but we are that system. If we want to see change, it will have to begin with us—with our hearts and minds, our actions, our voices and our votes. This Beatitude invites us to move from apathy to agency: Blessed are those who hunger and thirst for [justice], for they [will] be satisfied.

May we ache for change, embrace our power to do good, step into action, and walk in the way of justice.