Home Resources Books The Battle for Your Mind 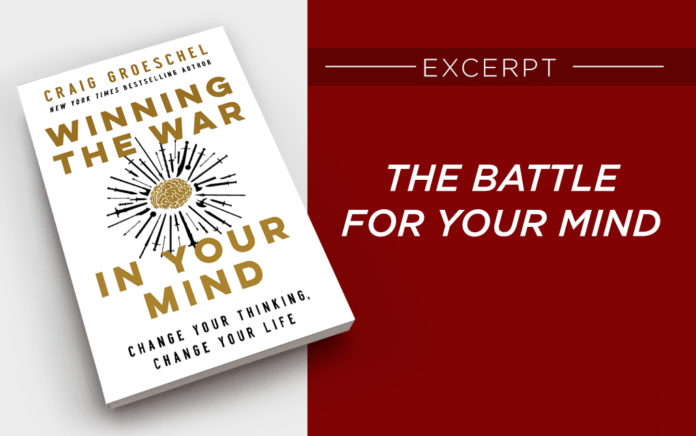 You cannot change what you do not confront.

Excerpted From
Winning the War in Your Mind
By Craig Groeschel

In the ’80s, we were taught that love is a battlefield. Thank you, Pat Benatar! If you’re a bit younger, you learned the same lesson from Jordin Sparks. If you are even younger, you know Battlefield as a series of video games.

But no, your mind is a battlefield, and the battle for your life is always won or lost in your mind.

Picture a battle with two opposing sides. Now imagine that the people on one side don’t realize they’re involved in a battle. The enemy is attacking and taking them out, picking them off one by one, but they are oblivious.

Hard to imagine because it’s just too absurd? I agree. But every day, you are engaged in a battle; are you aware of it? You may not recognize the battle you’re in while it’s wreaking havoc in your life. Ever wonder why you can’t shake a habit? Why you feel like you can’t connect with God? Why you lose your temper so easily? Why you too often make bad decisions? Why you and your spouse fight so much? Why you’re consumed with worry, fear, and negativity?

There is a reason why. Your mind is a war zone, and you are under attack. It’s critical that you become aware of the fight. You cannot change what you do not confront. If you ignore the battle, you lose the battle. The apostle Paul made this truth clear:

“We are not fighting against flesh-and-blood enemies, but against evil rulers and authorities of the unseen world, against mighty powers in this dark world, and against evil spirits in the heavenly places” —Ephesians 6:12

You cannot change what you do not confront.

Your adversary is not your boss, spouse, child, ex or neighbor with the demonic dog that is always barking. You may not realize it, but the one you are fighting against is your spiritual enemy, the Devil. Sound too extreme? That’s exactly what your enemy wants. There is an old saying that goes, “The greatest trick the Devil ever pulled was convincing the world he doesn’t exist.” Satan doesn’t want you to believe in him, so he works subtly. He knows that if you ignore him, he can invade your mind with impunity. He can plant seeds of doubt, confusion, worry, depression and anxiety that will continue to grow.

So how does he do this?

Simple. He lies. Just like I lied to Kevin about the locked door. Satan is a deceiver, and his strategy to defeat you is to persuade you to believe his lies. Jesus warned us, “There is no truth in him. When he lies, he speaks his native language, for he is a liar and the father of lies” (John 8:44). I think it’s interesting that the only time Satan is called a creator, a father, is here in connection to lies.

Understand this: Satan is your enemy, and every day he is prowling around (1 Peter 5:8), watching you, looking for a place where you might believe a lie.

From Outreach Magazine  What If It's Not Someone Else's Fault?

If you succeed at something, maybe he can convince you that you don’t need God. If you fail, he’ll try to brainwash you into thinking you’ll always be a failure.

You have a great first date? He’ll suggest romance is the only thing that will make you happy. First date was a disaster? He’ll whisper that you’ll never have anyone love you for who you are.

If you do a nice thing for a difficult person, he’ll murmur that you’re a pretty great person yourself and really don’t need God’s grace. If instead you speak harshly to someone, he’ll whisper that you’re an awful, hateful person whom God could never love.

Satan is conniving and trying to lock you in a prison of lies.

But you are not his prisoner of war, unless you choose to be. Those days can be over. That’s your call.

Order this book from Amazon.com »
Read our interview with Craig Groeschel »

Excerpted from Winning the War in Your Mind: Change Your Thinking, Change Your Life by Craig Groeschel. Copyright © February 2021 by Zondervan. Used by permission of Zondervan, Zondervan.com.