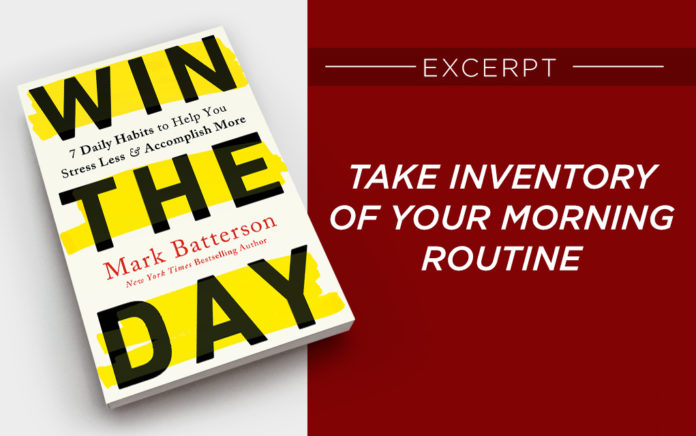 How you start the day sets the tone for the rest of the day.

Excerpted From
Win the Day
By Mark Batterson

If you ever have to eat a live frog, it’s best done first thing in the morning. Mark Twain is purported to have said that. If you have to eat two frogs, he recommended eating the biggest one first. I know this scenario is awfully unlikely, but it’s good advice nonetheless. Why eat the live frog first thing in the morning, you ask? Because you can go through the rest of your day knowing that the hardest task is behind you!

What to-do list items are you most tempted to procrastinate? What goals have you had forever, but you haven’t taken the first step? What difficult decision have you been delaying? That, my friend, is your frog! Give yourself a deadline, then get started. That is the third habit, and it’s a hard one to swallow. Sorry, couldn’t resist.

How you start the day sets the tone for the rest of day, yet many of us never give it a second thought beyond getting out the door on time. Our morning rituals are as unplanned as an earthquake. Is that the best way to start the day? Que será, será, whatever will be, will be. That’s sounding the retreat before the day even begins. If you want to win the day, you’ve got to attack the day. How? Eat the frog.

Some people like to ease into their day without breaking a sweat, and I totally get that. Perhaps even sleep in on occasion, which is totally fine. But there is something to be said for starting your day with a challenge. It might be raising your heart rate via exercise or lowering your blood pressure via meditation. Either way, consistency is king. Consistency beats intensity seven days a week!

I had a father-in-law who placed a high priority on prayer. After his treadmill workout at four o’clock, he was kneeling in prayer by five o’clock. He read three newspapers every morning, and attempted at least one crossword puzzle. He did all that before most people wake up! Of course, he grew up on a farm, which seems like an unfair advantage. He was used to milking the cows, which is not unlike eating the frog. Three newspapers and a crossword puzzle before breakfast may not be your thing, and that’s OK. The question is: What is your thing?

I have a friend who doesn’t get out of bed in the morning without going through a series of mental exercises. I don’t know about you, but I’d fall back asleep! Plus, the bathroom is calling my name. Somehow, my friend finds a way to focus. He flexes his gratitude muscle, giving thanks. Then he stretches his faith, praying for the people he loves. Early morning meditation may not be your thing, especially if you’re prone to hit the snooze button. The question is: What is your thing?

My sister-in-law, Nicole Schmidgall, starts the day with an intense boot camp. Sounds like fun doesn’t it? Even better, before sunrise! Somehow, she completed 250 workouts this past year and has the certificate to prove it. Boot camp may not be your thing, and that’s OK. But you know what question is coming: What is your thing?

What’s the one thing you least like to do, but you feel best about afterwards? That’s your frog. It’s often the hardest habit to establish, but it pays the biggest dividends. Whatever it is, you’ve got to figure out a morning routine that works for you. And I might add, one that works for your spouse and your kids and your dog and your boss. You don’t have to shirk your responsibilities or relationships to eat the frog. All you have to do is plan your work, then work your plan. The good news? Well begun is half done! If you do the natural, it sets God up to do something super.

From Outreach Magazine  A Conversation with Jessica Thompson

Excerpted from Win the Day: 7 Daily Habits to Help You Stress Less & Accomplish More Copyright © 2020 by Mark Batterson. Used by permission of Multnomah, an imprint of Penguin Random House LLC.