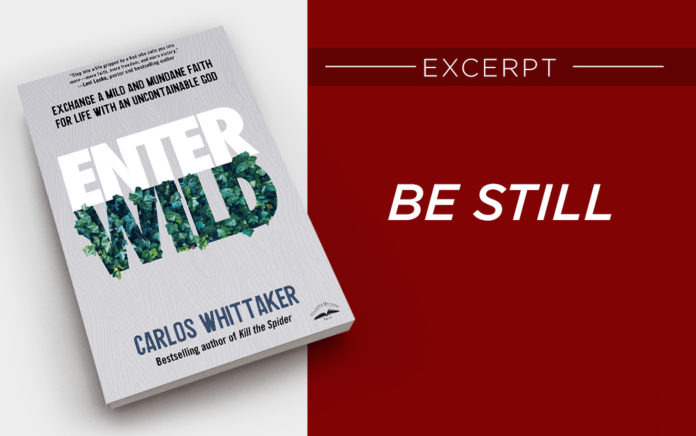 Excerpted FromEnter WildBy Carlos Whittaker Be Still Let’s rewind a few centuries back to the days of Moses so we can all realize we’re not alone in our current stillness struggle. Moses was the OG when it came to hearing from God. He had some crazy direct access to God himself, and he was always […]

Let’s rewind a few centuries back to the days of Moses so we can all realize we’re not alone in our current stillness struggle. Moses was the OG when it came to hearing from God. He had some crazy direct access to God himself, and he was always making people uncomfortable with all the stuff God was telling him. The Israelites were not into it on many occasions in the Bible. They were slaves to Pharaoh and the Egyptians for hundreds of years. Not just “go get me some water” kinda slaves. No, these ladies and gents were breaking stones 24/7. Their existence was not a happy one.

Cue God calling Moses to lead His people out of slavery. Cue God sending ten plagues to Egypt. Cue Pharaoh finally telling Moses to just take these people already. Cue Moses being a good listener and leading the Israelites out of Egypt. Cue Pharaoh freaking out when he realized what he had just done and ordering his army to go chase down the Israelites and bring them back. Cue the Israelites looking behind them and seeing the Egyptian army coming in hot and looking in front of them and seeing nothing but the Red Sea. Cue the moment of terror:

“When the Israelites saw the king and his army coming after them, they were very frightened and cried to the Lord for help. They said to Moses, ‘What have you done to us? Why did you bring us out of Egypt to die in the desert? There were plenty of graves for us in Egypt. We told you in Egypt, “Let us alone; we will stay and serve the Egyptians.” Now we will die in the desert’” (Ex. 14:10–12).

Let’s stop here for a second. If the Israelites were ever in a position where they needed to hear from God, now was the time. Instead, they did what so many of us do … They lost their minds. Yep. I know none of us can relate. But here is where the special sauce comes in. Here is where I think Moses gives us, whether you’re reading this book in 2020 or 3020, insight into something we need to hear. I think Moses’s response to the Israelites when they were frozen with dread and not able to hear from God is incredibly current and timely.

Stand Still. STAND STILL. This was how they were about to get saved? By standing still? I can just imagine a forty-year-old woman standing in front of Moses, sighing with her hand on her hip, declaring, “I’m sorry, Mr. Prophet. This seems like the worst idea on the planet. There is a huge cloud of dust in the distance, created by the hooves of the charging stallions pulling the chariots filled with spear-wielding soldiers. Our impending doom is upon us. And you want us to just stand here and take it?” This would absolutely be my wife’s reaction if I suggested the same. Luckily for the Israelites, it wasn’t me standing before them; it was Moses, God’s chosen one.

Still. Stillness. The Hebrew word here is yatsab, meaning “to set or station oneself, present oneself.” This was the secret. This was the challenge. Could the Israelites, despite the chaos surrounding them, stand still? That sounds more like us, doesn’t it?

In verse 16, God instructed Moses, “Raise your walking stick and hold it over the sea so that the sea will split and the people can cross it on dry land.”

Then what? Crazy. Out of this world. Wild.

Then Moses held his hand over the sea. All that night the Lord drove back the sea with a strong east wind, making the sea become dry ground. The water was split, and the Israelites went through the sea on dry land, with a wall of water on their right and on their left (vv. 21–22).

When the Egyptian army went after them, the Lord snapped his fingers, and the water show was over. And so was the Egyptian army. (Nowhere in Scripture does it say what movement the Lord used to release the water, so don’t email me telling me he didn’t snap his fingers. I just like imagining God snapping them and saying “Bye, Felicia!” as he turned back to the Israelites.)

When the Israelites stood still, then stopped, they were led to their Promised Land.

I feel like I need to remind us that this actually happened. This is not a fairy tale. This is the kind of God we serve. He is capable. We serve a God who does the impossible.

The truth is we don’t train for the battle while we’re in the battle. We train before the battle begins. That way, when we find ourselves standing feet away from the Red Sea and an entire army of enemies is charging toward us, we can stand still with an impossible peace. We can be sure rescue is coming, knowing his voice will speak and the ocean will split.

Excerpted from Enter Wild: Exchange a Mild and Mundane Faith for Life with an Uncontainable God. Copyright © 2020 by Carlos Whittaker. Used by permission of WaterBrook, an imprint of Penguin Random House LLC.