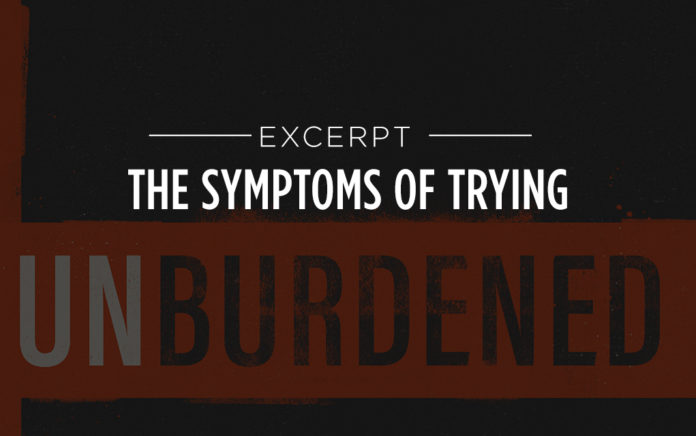 Reasons why many Christians are disillusioned, disappointed, frustrated and confused.

Excerpted From
Unburdened
By Vance Pitman

In my experience, people who are trying to live the Christian life almost always feel disillusioned, disappointed, frustrated and confused because they know they aren’t meeting the standards they’ve set for themselves. Yet they continue to believe they’ll get there if they just keep trying.

So how do you know if you’re caught up in this cycle of trying? In my experience, we need to watch for three main symptoms.

Bill has been a Christian his whole life. His parents were Christians, and he grew up in church. Now in his forties, he considers himself spiritually mature. He’s familiar with the Bible, he has no public vices, and he’s known as an active member of his church community.

Bill also has an addiction to online pornography. He knows this is both sinful and harmful, and he genuinely would like to have victory over this addiction—but on his terms. For most of the week, he tries his best to resist the temptation. But then his wife takes their children to a movie on Friday night, and Bill indulges while they’re away. The next morning, he reads his Bible for an extra thirty minutes. He also confesses his sin during his prayer time and commits to “doing better” the next time he’s left alone in the house.

Bill knows he probably won’t do better, but that’s not the point. The point is that he counts on his extra good behavior to somehow earn back whatever spiritual credit he lost with his bad behavior.

Nancy is up for a promotion at work. She’s competing with two of her coworkers for it, and she’s done all she can at the office to make her case. During her prayer time, she tells God she’d like to receive the promotion. She even asks Him to provide that blessing if it lines up with His will. Additionally, she spends extra time in prayer throughout the week. She reads her Bible longer and longer each day, and she’s careful to avoid anything that could be considered sinful— she even rejects her routine bowl of ice cream each night.

From Outreach Magazine  Candid Conversations: What Is Systemic Bias and Racism?

Whether or not she’s conscious of it, Nancy is attempting to store up spiritual credit—credit she hopes will allow her to “cash in” and receive the promotion. In both of these examples, the core misconception is that we can earn spiritual credit with God—either forgiveness or favor—through our own efforts.

For Nancy, guilt usually comes when she hears about the high points of other people’s spiritual lives. For example, when one of the people in her small group speaks up about sharing the gospel with a coworker, Nancy is genuinely pleased to hear the story. But it also makes her feel guilty and anxious because it’s been a long time since she’s shared the gospel with one of her coworkers. She feels as if her friend’s success has highlighted a weakness in her own spiritual life.

Nancy resolves to have a spiritual conversation with one of her coworkers the next day. She wouldn’t phrase it this way, but she feels she’s fallen behind her friend in terms of spiritual accomplishments, and she wants to catch up.

Bill often feels guilty when he chooses something he enjoys over the opportunity to do something “spiritual.” For example, his favorite football team is playing on Sunday Night Football, but his church is having a worship night the same time as the game. Bill decides to stay home and watch the game, but he feels guilty, and he doesn’t really enjoy the time to himself.

Bill doesn’t know how to articulate this sense of guilt, but he’s built his life on a foundation of spiritual performance not only for himself but also for others. Choosing to watch football over attending a church service makes Bill feel guilty and uncomfortable because he perceives it as a missed opportunity to be seen prioritizing spiritual things over his own desires. It makes him feel less mature as a Christian.

Another common symptom of trying to live the Christian life is developing a level of arrogance when it comes to our spirituality. Whether or not we admit it to ourselves, we start to believe we’re ahead of others in terms of being a good Christian—almost as if we view life as a spiritual marathon. We think we’re in the top 10 percent of performers. That makes us feel good, and we like that feeling.

Back to Bill. He’s been part of a small group with ten or twelve other men for close to a year now. They meet weekly to work through a Bible study, pray for one another, and fellowship. Most of the men are around Bill’s age, but he views the group as split into different spiritual levels. In his mind, the group leader is the most spiritually mature, but Bill comes next. He knows several of the other men admire him, and he believes they’re right to do so.

Two men in the group are recovering from alcoholism, and another man rarely does any of the assigned homework for the Bible study. Bill sees them at the bottom level of spiritual maturity within the group. When they talk during the study, Bill doesn’t give much credence to what they say. Nor does he consider sparking a deeper friendship with any of these three men. Deep down, he believes the differences in their spiritual maturity would prevent them from forming a meaningful connection. Bill is aware that his own troubles with pornography are similar to an alcohol addiction, but he genuinely believes he will “get it under control” in another year or so. He doesn’t need to seek outside help.

Nancy regularly interacts with customers and neighbors who aren’t Christians. She knows they’re not Christians because of how they dress, how they talk, and how they support certain politicians. Deep down, Nancy doesn’t like such people. She finds them off-putting and dangerous in a way she doesn’t completely understand.

When Nancy interacts with her customers and neighbors, she’s kind and polite. She doesn’t display her dislike in any public fashion because she believes that would be dishonoring Jesus. She considers herself a good example, and she hopes her actions and attitudes will one day rub off on those who need to become more like her.