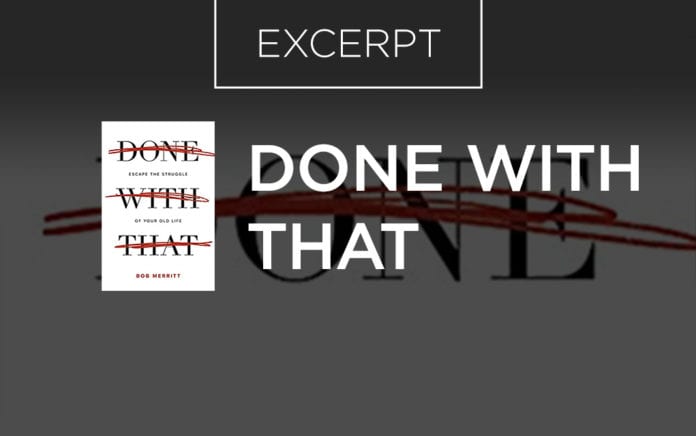 Pain is a signal that something’s wrong, and it takes humility, honesty and hard work to address it.

So where do you feel some pain?

It could be physical. But most often people suffer from a painful relationship, habit, memory or past.

Whatever the cause, pain can be sharp, sending an immediate message to our brains that something’s wrong. Other times it may be dull, and we simply try to ignore or manage it.

Some people try to medicate their pain with escapist habits like excessive working or exercising. Others use alcohol, drugs, pornography, overeating or overspending. But if you ignore pain, it’ll keep you off the golf course and, more importantly, prevent you from living the new life God intends for you to live.

So instead, let pain be a signal and say, “You know, that hurts. I’d better fix that, overcome that, heal that … be done with that.”

Thousands of people decide to stop what causes them pain every day, and you can too. By acknowledging the pain and deciding to do something about it, you can start living and achieving in ways you never could before.

Humility is the opposite of arrogance. Humility is having a modest view of oneself, and it includes a simple admission that something’s not right and some weaknesses need to be addressed. It’s essential to getting better—at golf, at marriage or on a team at work.

Humility gets a bad rap, though, because many people view it as a weakness. But it’s just the opposite. You’ll never hear a person with weak character say things like “I was wrong. I blew it. I need help. Will you forgive me?” Only the strong admit their weaknesses.

Have you ever felt the freedom that comes from admitting you’re not perfect? My wife can chastise me for forgetting or failing at something (which I do multiple times a day). But instead of getting defensive, I’ve started to jokingly say, “What do you expect?” or “Of course I failed—look at my upbringing.” She thinks it’s some crafty ploy to excuse myself for being irresponsible. But I’m not that smart. I’m just human. My teasing isn’t an excuse, just a reminder to both of us to have grace even as we strive to do better.

Look at the statements below and ask yourself, “Are any of these true of me?”

I feel anxious a lot.
I don’t connect well with people.
I feel angry often.
I haven’t been truly happy in weeks.
I feel spiritually dry and distant from God.
I keep making the same mistakes.
My life lacks meaning and purpose.

If any of those statements apply to you, there’s a reason. These trigger points of pain provide clues to a deeper issue. When something keeps hurting, robbing your joy, and preventing you from moving ahead, you have two choices. Either you can pretend nothing’s wrong, continue living with the pain, and hope it goes away. Or you can humbly admit something’s wrong and, with God’s help, take the first step toward a new and better life.

Again, the Bible says, “God opposes the proud but gives grace to the humble” (James 4:6). It means God favors and helps those who admit they’re not perfect and need help. He gives them grace—second, third and fourth chances.

Because of sin we all have something in our lives that causes us and others varying degrees of pain. But dealing with these habits and patterns requires honesty.

In his book Integrity, Henry Cloud said that facts are your friends. He quoted from Jim Collins’s book Good to Great: “You absolutely cannot make a series of good decisions without first confronting the brutal facts.” Then he quoted an acquaintance who said, “In the end, people get to where they are supposed to. If they make it, there was a reason. If they don’t, there was one too.” Cloud stated the hard truth: “Reality rules.”

From Outreach Magazine  The Limitless Possibilities of a Biblical ‘Whatever’

If you’re a parent, what are the facts concerning your kids? Are they responsible and faith-filled or defiant, entitled and rebellious? How about your finances? Are you saving and giving or falling farther behind in debt? And your relationships—are they healthy and growing, or do you burn through one after another and assume everyone else is the problem? What are the facts regarding your diet, health, schedule and faith? Are they healthy and growing—or sick and dying?

I never knew my golf swing was stressing my left shoulder, that certain tendons between the shoulder and rotator cuff are extremely vulnerable to inflammation and pain, or that lifting a one-pound weight strengthens the shoulder without building the biceps and triceps. These and other facts have become invaluable friends that’ll keep me in the game.

If you don’t know the truth about what’s causing your pain, you’ll remain stuck in the old life. So where do you start? With honesty and openness. Be reflective about your life. Think about what’s not working or what you wish worked better. Ask yourself, What’s the one thing I wish I could stop, change or improve?

Next, find a soft chair, turn everything off, and sit for 10 minutes in silence before the God who made you, loves you and knows everything about you. God wants you to live freely and joyfully, so if you give him a chance, he’ll nudge you about what’s causing pain in your relationships, family, work or finances.

The biggest test of honesty (and strength) is to ask others to help you. If you have kids, they’ll be happy to point out your flaws. When my son was 10, I said, “Dave, where do I need to improve?”

He replied, “Are you serious? Let me tell you …” and then fired off five glaring flaws in rapid succession—mostly about my hurtful words and bursts of anger. You’d think I would’ve already realized those things were hurting my kids, but I was unaware. It took a 10-year-old.

If you’re married, ask your spouse or a trusted friend what behaviors cause frustration and pain. That requires graduate-level strength and humility.

Or meet with a good counselor. It saddens me to watch so many people repeat the same mistakes that hurt themselves and others simply because they don’t know what’s causing the pain.

In our work environment we’ve tried to normalize honesty with one another. It’s actually one of our staff values, and we call it building a culture of feedback.

For example, it’s common for a staff member to prepare a talk, ask three or four colleagues to critique it, and then, after the talk, request feedback on how to improve. We’ve found that normalizing the practice of feedback takes some of the fear away. I say “some of the fear” because I’m always afraid to receive feedback on my talks, but that’s how you get better.

We all have blind spots. We all have flaws in our personalities, behavior or work habits that we can’t see, and they block our performance and growth. But others can see them. If we permit them to give us honest feedback, they’ll do us a huge favor so we can improve.

At a recent all-staff meeting, one senior staff member spoke about building this culture of feedback. Byron emphasized the importance of feedback, taught how to give and receive it, and then, at the end, modeled how to do it. It comes down to two questions: “What did I do well? And what could I do better?”

He stood in front of our entire staff and said, “So now I want you to tell me. What did I do well in my talk today, and what could I have done better?”

Nobody said a word, so he repeated the question.

Finally one brave soul raised his hand and commented on what he had done well. Byron said, “Thank you for that. Now what could I have done better?”

The guy was surrounded by 250 colleagues who feared offending this senior staff person. Byron pressed harder: “Come on. Give me the gift of knowing how I can improve.” What a great statement.

Byron thanked him profusely and then said, “Someone else, what did I do well, and where can I improve?” He asked this four or five times, getting input from different people, until it became almost fun and normal. Can you imagine how a staff or business would improve if they learned how to give and receive honest feedback on their performance?

I’m actually quite bad at giving and receiving feedback. I don’t like it; I get short of breath, and my whole body shakes. So I procrastinate and often wait until the pain is so bad and the damage so severe that it’s too late to resolve.

But I’m trying. Whenever I sense pain in my body, spirit or relationships, I try to pay attention to it. I’m trying to find the most competent people, ask for their advice, compare their thoughts, and—this is key—find the overlap. I look for repetition. When five competent people all say the same thing, then it’s more likely you have the facts. You simply can’t improve and find freedom from the old life until you go on a fact-finding mission about what’s causing pain. So be humble, and be honest.

In John Maxwell’s book Intentional Living, he wrote, “There is enormous magic in the tiny word do. When we tell ourselves, ‘I’ll do it,’ we unleash tremendous power. … What is the number one catalyst for change? It’s action. … If you take action, it will change your life.”

He stated he can’t stand words like desire, wish, fantasy, hopefully and someday. They’re passive and defeating. Instead, he loves action, purpose, strategy, definitely and today— active and winsome words.

Just as there is physical therapy for shoulder pain, there is spiritual therapy to develop our faith; both require a commitment to doing the work. You can get 15 pages of exercises from three professionals, but just desiring and knowing how to get healthy won’t actually make you healthy. You have to do the work. You have to follow the plan and do it right.

For 10 years I religiously followed a three-days-a-week workout routine: 35 minutes on the elliptical, 10 minutes of stretching, 20 minutes of weights, then two sets of 12 pull-ups at the end. I was the champion pull-up guy in high school and secretly measured my manhood by the ability to continue doing them. But three people told me, “That’s the worst thing you can do for your shoulder. Stop doing pull-ups!” Furthermore, during therapy I discovered I exercised completely wrong by using too much weight, going too fast and having bad posture.

Today I’m assigned these wimpy, embarrassing exercises with one-pound weights. I also do pelvic thrusts while lying on the floor to strengthen my lower back. They’re borderline obscene and really shouldn’t be done in public. But I’m all in and committed to staying strong. After humbling myself to accept the honest help I needed, I now know the work I need to do.

It took humility, facts and action to abandon the old life of failure and pain and move squarely into the new life of golf and happiness.