Home Resources Books Why We Should Be Intentional About Rest 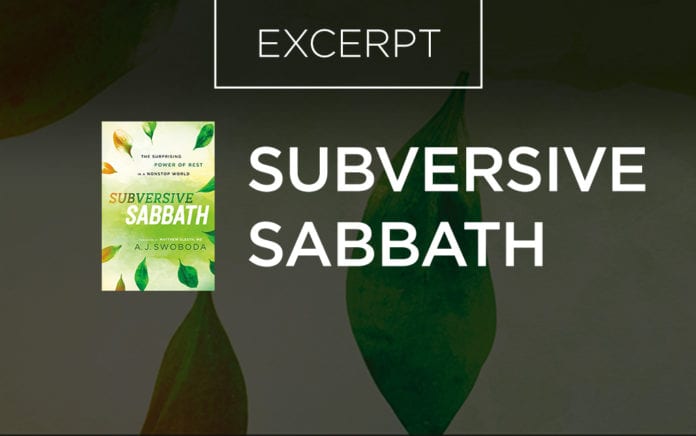 God places a great deal of significance on rest, so much so that it was his first word to Adam and Eve.

Humans were made to rest. Literally. When God created the world, he entrusted Adam and Eve with a wondrous world of potential where they could explore, discover, play, eat and enjoy. A new world spanned brilliantly before them. A cadence can be immediately discerned to that creation story: “Let there be light … Let there be a vault … Let the water … Let the land … Let there be lights … Let us make … By the seventh day God had finished the work he had been doing; so on the seventh day he rested from all his work. Then God blessed the seventh day and made it holy, because on it he rested from all the work of creating that he had done” (Gen. 1:3–2:3). There is a rhythm to the week. God finished six days of work by resting for one.

God’s rhythm of work and rest soon became the framework for human work and rest: “Six days you shall labor and do all your work, but the seventh day is a sabbath to the Lord your God. On it you shall not do any work” (Exod. 20:9–10). From the beginning, God’s own life becomes the model for human life. Diana Butler Bass draws a connection between God’s rhythm and ours: “Our bodies move to a rhythm of work and rest that follows the rhythm originally strummed by God on the waters of creation. As God worked, so shall we; as God rested, so shall we. Working and resting, we who are human are in the image of God.” To image God is to work and rest as God worked and rested.

Humanity was made on day six of creation. Day seven was that day in which God, Adam, Eve and the whole garden ceased from productivity and effort.

Striking as it is, Adam and Eve’s first full day of existence was a day of rest, not work. What a first impression! Social scientists point out that we make up our minds about people in the first 100 milliseconds of our first meeting.

Adam and Eve had accomplished nothing to earn this gratuitous day of rest. Sabbath is, in my estimation, the first image of the gospel in the biblical story. God’s nature always gives rest first; work comes later. This is reflected in all of our lives. Before our lives in this world began, we got nine months of rest in the womb. Before taking up a vocation, we get a few years to just play as children. And before our six days of labor, we receive the day of rest.

Karl Barth famously pointed out that the only thing Adam and Eve had to celebrate on that first Sabbath was God and his creation: “That God rested on the seventh day, and blessed and sanctified it, is the first divine action which man is privileged to witness; and that he himself may keep the Sabbath with God, completely free from work, is the first word spoken to him, the first obligation laid on him.” Humanity had only God’s goodness to celebrate, nothing more. Work had not even begun. The Sabbath teaches us that we do not work to please God. Rather, we rest because God is already pleased with the work he has accomplished in us.

A problem quickly ensued—God’s word was forgotten. Eden’s first residents, Adam and Eve, were given God-established boundaries, such as with food: “You are free to eat from any tree in the garden,” God says, “but you must not eat from the tree of the knowledge of good and evil” (Gen. 2:16–17).

Adam and Eve could eat from any tree but one. There were similar boundaries around time. One day a week, as a culminating moment in time, Adam and Eve were to rest, or menukhah, from their garden activities.

These boundaries soon fell by the wayside. Amnesia set in. The memory of God’s word eroded, as reflected in Eve’s attempt to explain God’s command to the serpent after being tempted to eat the forbidden fruit: “But God did say, ‘You must not eat fruit from the tree that is in the middle of the garden, and you must not touch it, or you will die’” (Gen. 3:3). Eve, in that critical moment, reveals humanity’s vexing and perennial problem: a keen ability to forget what God actually said. Of course, God never commanded Adam or Eve not to touch the tree. Rather, God commanded them not to eat from the tree. Eve added to God’s word. A good deal of our own sin, we cannot deny, is largely the result of addition or subtraction to what God has spoken. We forget what God actually said or, worse yet, add or subtract to what God has said. Scripture reminds us, “Do not add … and do not subtract from [God’s word], but keep the commands of the Lord your God that I give you” (Deut. 4:2). That is the human condition: to forget, to add, to subtract or even to bend God’s good word so that it fits our own selfish liking. Humanity is, in this sense, like Jill in C.S. Lewis’ The Silver Chair, who was told to repeat Aslan’s instructions so as not to forget them. “‘Child,’ said Aslan … ‘perhaps you do not see quite as well as you think. But the first step is to remember. Repeat to me, in order, the four signs.’” Jill soon forgets, however, and it alters her and her companions’ course.

So even if we do remember the Sabbath, we often add or subtract from it. On one side, moralists and legalists add precept upon precept to the Sabbath, as the Pharisees and Sadducees did during the times of Christ, a tendency that time and again infuriates Jesus in the Gospels. Others have subtracted from the Sabbath commandment or ignored it altogether as though it did not matter to God or the well-being of creation. Both of these extremes grieve our Creator. Addition and subtraction are simply different ways of forgetting what God has said.

Not only did a day of rest orient Adam and Eve’s life around God; it also orients our hearts, bodies and minds toward the Creator. Sabbath reminds us that “our time” was never our time in the first place. All time is God’s time. And the time we have been given is to be used faithfully in worship of him. Orientation is a fascinating word based on the Latin word oriri, meaning “to rise,” as in where the sun rises. The sun rises in the east.

Early Christians gave great thought and intentionality to what they oriented themselves toward. For instance, the altar in the earliest churches was intentionally directed east so that worshipers would face Jerusalem as they received the Lord’s Supper together. For this same reason, many of the earliest Christians were buried with their feet facing toward the east. Their rationale was simple: When Christ returned and resurrected their bodies, they wanted to be standing and be facing Jerusalem in their resurrection.

To be a Christian was, and is, to reorient one’s entire life and death around Jesus Christ. Sabbath is an orientation as well—an all-encompassing turning toward the creator God that changes everything about our lives. Sabbath is that kind of complete reorientation of our lives toward the hope and redemption of Christ’s work.

Sabbath baptizes our week into the grace and mercy of God.