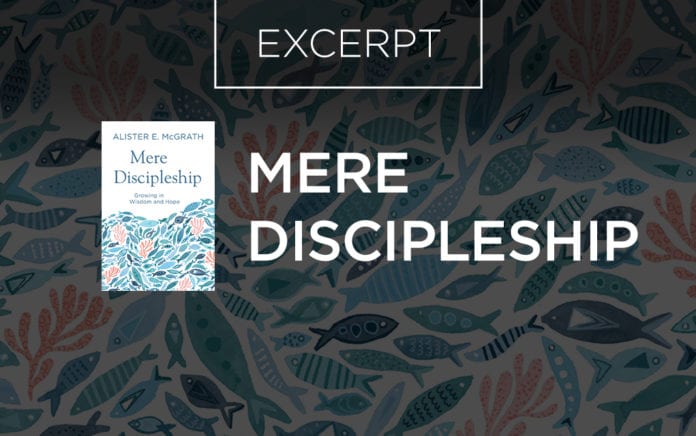 Though not as powerful as face-to-face mentoring, through books we can be mentored by those who have passed.

Books: A Special Category of Mentoring

After discovering Christianity in 1971, I found myself struggling to understand what I had embraced. My difficulties as a novice Christian disciple did not lie only in making sense of the basic ideas of faith as these were set out in the creeds. I was someone who loved the natural sciences and had once believed that the sciences and religious faith were locked into a conflict that made it impossible for a real scientist to be a religious believer. I was unsure where my journey of faith would take me. Would it force me to compartmentalize my mind, allocating separate regions of it to science and faith, so that I could avoid thinking about their potentially irreconcilable tensions?

Were there other intellectual options, at that point unknown to me, that could allow me to see science and faith as aspects of a greater whole? Who could point me to these options—or, even better, tell me about them?

Although there were many Christian students at Oxford working in the field of the natural sciences, most adopted an approach that I valued but found difficult to work out in practice. All truth is God’s truth, I was told. For this reason, scientific truth could not be inconsistent with the truths of the Christian faith. There might seem to be tensions between science and faith, but these were more apparent than real. At one level, I could see the merits in this approach, yet it seemed to me to be frustratingly abstract and generalized. I felt that I needed more help than this.

In the end, my difficulties were resolved through an imaginative leap, brought about by an older and wiser person who shared his own way of thinking with me. Charles A. Coulson, Oxford University’s first professor of theoretical chemistry, was a Fellow of Wadham College, where I was an undergraduate. A year or so after my conversion, I heard Coulson—a prominent Methodist lay preacher—preach in Wadham Chapel on the fundamental coherence of nature and faith.

The intellectual framework he outlined in his sermon provided a radical clarification of the issues and allowed me to see a way ahead. I was able to talk to him afterward about his ideas concerning the coherence of science and faith. These remain integral to my thinking to this day.

Coulson became a mentor to me. Knowing that my specialist subject was quantum theory, he invited me to attend the annual conferences he organized on this subject at Wadham College, which exposed me to some of the latest thinking in the field. One of his core themes was that the idea of a “god of the gaps” was to be rejected. In its place, Coulson affirmed a Christian “big picture”—the articulation of a luminous vision of reality that offered insight into the scientific process and its successes, while at the same time setting out a larger narrative that allowed engagement with questions raised by science, yet lying beyond its capacity to answer. That notion of a “big picture” stands at the heart of my own thinking about the Christian faith and informs my research and writing to this day.

So would I have discovered such an approach without Coulson?

Perhaps. Coulson, however, helped me to do more than understand his ideas; he embodied his own way of thinking. It had become part of him, shaping his attitudes toward science and faith. A few years back, I read a biography of the American physicist J. Robert Oppenheimer (1904–67), now remembered mainly as the “father of the atomic bomb.” One of Oppenheimer’s throwaway remarks has stayed with me: “The best way to send information is to wrap it up in a person.” Without people who are shaped by them, ideas remain abstract. To grasp the significance of an idea, we need to see what difference it makes to the way someone thinks, acts and sees the world.

A mentor is not an authority figure but a person we come to respect and trust. Spiritually, we need people who can model for us what loving God and loving others actually looks like. Intellectually, we need people who have developed outlooks and practices that reflect their fundamental beliefs. Discipleship is better seen as a journey than something that happens in a classroom. It takes place relationally on the road, through observation, imitation, learning from mistakes, and the formation of habits and skills; it takes place intellectually on that same road, through collaboration and a sharing of practices with our fellow travelers, as we listen to how they understand the Bible, assimilate its ideas, and cope with the uncertainties of life.

Like any good mentor, Coulson embodied what he believed so that I could grasp the significance of his ideas through knowing him as a person. He died of cancer in 1974, so I never got to know him as well as I would have liked, but even our brief acquaintance was enough to help me grasp and then inhabit his way of seeing the relation of science and faith. The idea was expressed in his books, yet it was embodied in his life. Perhaps I was like an apprentice to a master, learning through both watching and listening.

From Outreach Magazine  Hope for Nov. 9: Pastors on the Election

That’s one of the reasons I enjoy reading (and sometimes even writing) biographies of people such as C.S. Lewis and other Christian luminaries. They help me to understand how theological ideas shape our lives through a process of reflective inhabitation. Such writers have journeyed on the road and passed their wisdom down to me. They challenge my judgments, constantly inviting me to see things in a new way and try out fresh approaches.

There are, of course, some people I would have loved to have known as mentors. Sadly, I shall never be able to know great writers of the past, such as Augustine of Hippo, Athanasius of Alexandria or Martin Luther—to name only three individuals—or to journey alongside them in person and talk to them about their habits of thought, prayer and adoration. Yet I can read their books. While this is no substitute for the living presence of a mentor, it allows me to absorb their ideas and work out how I might benefit from their wisdom. Though dead, they still speak to us, offering us encouragement and stimulus.

I now see books as providing a special category of mentoring, with a significant capacity to change and enrich our lives. I gladly acknowledge the importance of conversations with significant individuals in my early stages of faith. Yet, while my early conversations with Coulson opened up new ways of thinking, it was my subsequent engagement with his books that consolidated those ideas, adding breadth and depth to my new mental map of reality. As I grow older, I find myself relying more on books than I did, partly because my own growth in faith more recently has not taken the form of acquiring new ideas but of deepening my appreciation of ones that I already knew by reading more about them and the words of other wayfarers on the road about how they understood and applied those ideas.