Home Resources Books Why a Lamb Must Be One Year Old 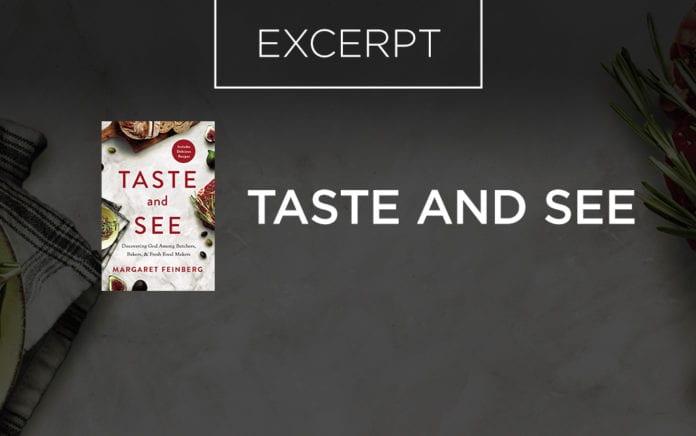 Christ is our perfect, unblemished passover lamb who takes away our sin and reconciles us to himself.

Adapted From
Taste and See
By Margaret Feinberg

To better savor the rich layers of meaning of food in the Bible, I embarked on a spiritual, culinary adventure called Taste and See: An Aspiring Foodie’s Search for God Among Butchers, Bakers and Fresh Food Makers. I studied under a butcher who has been called “The Meat Apostle” in McKinney, Texas. Matt Hamilton is passionate about great steak, animal welfare and his profession as a calling.

Together, we opened up the Scripture to see how understand the role of sacrifice in the Bible. The Torah gives specific instructions regarding the selection of every lamb that appears on that altar. The animal must be one-year-old and unblemished. Matt explains this detail is deliberate. At one year old, a lamb is mature enough to be full-grown but not old enough to consume more resources than it will return. The yearling represents a year of hard work and investment.

“God wants a person’s best,” Matt says. “He’s saying, ‘Don’t bring me the lamb you’re going to have to kill anyway.’ If it only has three legs or lacks an ear, that’s not what God wants. He wants our best and to trust him that when we sacrifice, he’ll provide the next animal for the offering.”

Then the prophet Isaiah promises the long-awaited restoration of God’s people will not come through animal sacrifice but human sacrifice. The suffering servant will be a guilt offering for the people of God. Like a lamb led to slaughter before the priests, he will neither resist nor protest.

When Jesus appears on the scene, those who have waited for him don’t recognize him. Hoping for a political mover-and-shaker, they forget Isaiah’s description of a sheep-like savior, even as John the Baptist cries out,

“Look, the Lamb of God, who takes away the sin of the world!”

From a butcher’s point of view, it makes sense that Jesus would take on lamb imagery rather than aligning with other livestock.

“A lamb is the most vulnerable animal,” Matt explains. “The only thing more vulnerable is a baby chick, because the parents won’t defend it.”

Those hearing Jesus’ words would have understood that John was saying, “Here’s the most vulnerable One, or rather the One making himself most vulnerable, who takes away the sins of the world.” Perhaps they noticed that John made the declaration near the Passover.

This becomes all the more apparent in the book of Hebrews, where the imagery of sacrificial animal blood reveals the cleansing blood of Christ. For ancient priests, every morning is like the last—standing at the same altar, offering the same sacrifices each day. Christ overturns this system by offering himself as the perfect, unblemished offering, a one-and-done sacrifice for sins.

The scope of Jesus’ sacrifice reaches cosmological proportions as God, through Christ, reconciles all things in heaven and on earth to himself, making deep shalom, a holy peace, through the blood of God’s Lamb.

Then a beloved disciple trapped on the island of Patmos provides a glimpse of this spiritual reality. John’s mind-boggling visions in Revelation circle around Jesus as shepherd and lamb. In the New Jerusalem, he says, we will gather around the Lamb enthroned; a place without temple or offering, because he is the temple and offering.

By the time I leave the Meat Apostle, I know he’s given me a lot to chew on—biblically, spiritually, personally and well, literally. I depart with a deeper appreciation for the life of the animal, its welfare, the rancher and Christ as the ultimate sacrifice.