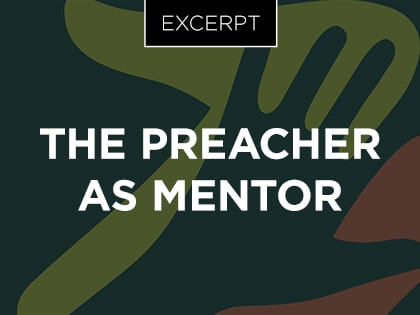 Preachers exert a unique influence as messengers of God and mentors in the faith. Here’s how.

If mentoring can occur in unconventional ways and places—through the biography of a long-dead theologian, via pseudonymous epistles or in the confines of a hospice room—then there is no reason not to think that mentoring can occur through a preacher in a pulpit. The pulpit is itself a place that blends closeness and distance, and, as such, it can be a place where what Daloz calls “the magic” of mentoring can take place. As for closeness, the era of the “Pulpit Princes”—those royal proclaimers of a previous day who stood above their people in authority, erudition and moral virtue—has receded into the dim past. In Herman Melville’s classic novel Moby Dick, a preacher, Father Mapple, delivers a sermon on the book of Jonah from a pulpit fashioned after a ship’s prow, a thundering message about sin and the sovereignty of God. As he nears the end of the sermon, Father Mapple imagines moving from the pulpit to the pews, from the role of proclaimer to that of fellow listener: “Shipmates, God has laid but one hand upon you; both his hands press upon me. I have read ye by what murky light may be mine the lesson that Jonah teaches to all sinners; and therefore to ye, and still more to me, for I am a greater sinner than ye. And now how gladly would I come down from this mast-head and sit on the hatches there where you sit, and listen as you listen, while some one of you reads me that other and more awful lesson which Jonah teaches to me, as a pilot of the living God.”

Melville wrote during a time when preaching was in fact already in the process of moving from the exalted “masthead” to the lowly “hatches.” As historian David S. Reynolds notes, “Between 1800 and 1860, popular sermon style, which had in Puritan times been characterized primarily by theological rigor and restraint of the imagination, came to be dominated by diverting narrative, extensive illustrations and even colloquial humor.” Father Mapple was, in fact, modeled on the wildly popular Boston Methodist preacher at the Seamen’s Bethel Church in Boston, Edward Thompson Taylor, whose sermons, which attracted large, diverse and enthusiastic congregations, were marked by vivid stories and images and “fused the mild theology of Boston liberalism with the daring imagery of colloquial revivalism.”

Over the last century and a half, little has stood in the way of the movement of preaching toward the hearers, and the transition from masthead to hatches is now thoroughgoing. In many congregations today, the preacher is more likely to walk around the chancel with a handheld microphone and wearing jeans and a sweatshirt than to stand in a lofty pulpit wearing the robes of ecclesial status. Nearly a century of talk about storytelling and imagery and conversational preaching has brought today’s preachers well within the experiential range and communicational space of hearers. Even though he stood in the magnificent pulpit of the even more magnificent Riverside Church in New York, Harry Emerson Fosdick, in the spirit of Edward Taylor, turned his sermons into pastoral conversations and significantly impacted American preaching in the process.

Even though much contemporary American preaching has descended from the masthead to the hatches, from the pulpit heights to the level of the nave, and even though the preacher is now close enough to the hearer to be more a friend than a remote authority figure, some distance—a necessary distance for mentoring—between preacher and hearer remains. Even when preachers try to deny this distinction between themselves and their hearers or to escape it, by, say, wearing khakis and a golf shirt and opening the sermon with a couple of jokes and a self-deprecating anecdote, the distance inevitably remains. I am not speaking here of the kind of distance where the preacher refuses to be overbearing and intentionally withdraws from the sermon for the sake of leaving room for the hearer. I am thinking rather of the inescapable difference in roles played by preacher and listener. Theologically we may want to say that preacher and hearer are equals in the sermonic transaction, that they work together to create the event of the sermon, and the difference between them is one of function, not status. True, and yet when the function of one of the partners is to speak for God, then the repeated practice of that function tends to imbue the practitioner with an iconic status, a little like actor Hal Holbrook carrying the aura of Mark Twain with him wherever he went. The preacher is not God, of course, but the preacher speaks for God in the sermon, and some of this role inevitably adheres to the person of the preacher, even if the preacher tries to downplay the role as God’s spokesperson or is embarrassed by it. Preachers stand in the mentoring space by virtue of their in-between status. They are not God, but for all their attempts to be one of the folks, they are not just like the hearers either.

In some ways the blend of presence and distance in a preacher is akin to the experience of actor Judd Hirsch who played the role of Dr. Tyrone C. Berger, a psychiatrist, in the film Ordinary People.

Hirsch played the part with such compassion, attractive eccentricity and warmth that his character leapt off the screen with persuasive and affective force. Letters of appreciation from psychiatrists, grateful for the “image boost” Hirsch’s portrayal provided, poured out to Hirsch and also to director Robert Redford. At least one viewer of the film claimed to have received therapeutic benefit from Hirsch’s character:

“The film really took on meaning for me here because I had my first real dose of therapeutic treatment at the time I saw the movie. I was very much like Conrad [Dr. Berger’s patient]. He didn’t want to go to therapy, originally, and neither did I. I had had two prior experiences in therapy when I was a young child, and they didn’t go over very well. I really didn’t want to be there. But this time around I was motivated to get better. Someone had told me that the reason I was a procrastinator was because I subconsciously didn’t want to grow up. It made sense to me and now I was determined to prove this person wrong and act like a man and meet all my responsibilities. I ended up staying with my doctor for eight years and found a needed confidant and friend.”

Even though Judd Hirsch obviously moved on to other parts, and even though he has a private life as a nonpsychiatrist, the aura of this role still clings to him. Posters of Hirsch as Dr. Berger have been sold by the thousands, and I would not at all be surprised if strangers approach him in the grocery store seeking wise counsel. Just so, today’s preacher may use approachable language and everyday stories and may take on an unassuming “neighbor-next-door” posture, but, for those who hear the sermons, this same preacher is unmistakably God’s person in ways that differ from ordinary folk, regardless of all equalizing notions of the priesthood of all believers. It is a distance necessary for the magic of mentoring to take place.

But in what ways can a preacher become a mentor from the pulpit? Daloz, drawing inspiration from the original figure of Mentor in The Odyssey, says, “Mentors give us the magic that allows us to enter the darkness, a talisman to protect us from evil spells, a gem of wise advice and sometimes simply courage. But always the mentor appears near the outset of the journey as a helper, equipping us in some way for what is to come.”