Home Resources Books Working to Save Lives from Gun Violence 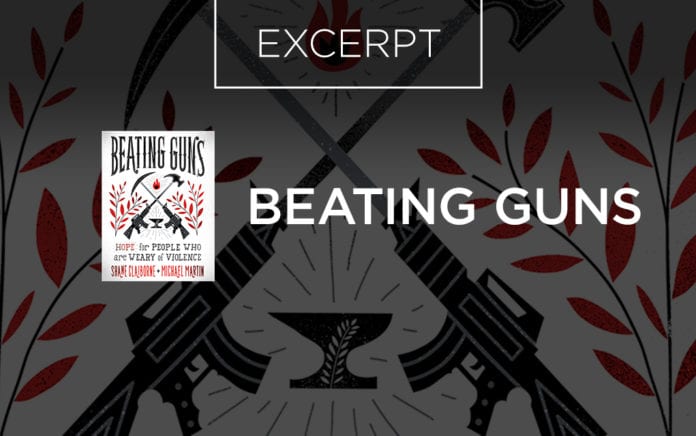 Excerpted From Beating Guns By Shane Claiborne and Michael Martin Champion of Life Not many people get argued into thinking differently, but experiences and stories move us, especially when we have the humility to listen and to view the world from a different lens, from someone else’s eyes. We share many stories in this book—many […]

Excerpted From
Beating Guns
By Shane Claiborne and Michael Martin

Not many people get argued into thinking differently, but experiences and stories move us, especially when we have the humility to listen and to view the world from a different lens, from someone else’s eyes. We share many stories in this book—many of them from people who have been directly affected by guns. But first, let’s start with a personal story.

I (Shane) grew up with guns in the good ole state of Tennessee. Down South, God and guns go together like Oreos and milk. It never even occurred to me to question whether it was a good idea to have guns in our house growing up. Then I had a friend in elementary school who was playing one of those childhood games of cops and robbers with his best friend. They had grabbed a real gun but were convinced it wasn’t loaded. I’m sure you know what happened next, because it happens all the time. My friend pulled the trigger and killed his best friend. That little boy died immediately. Last I heard, the other little boy is still in a therapeutic hospital and may never leave.

I had an uncle who went into his front yard, laid out a tarp and shot himself. He had two kids. Obviously, I grieved these tragedies, deeply. But they didn’t make me question guns, not immediately anyway. Accidents and suicides happen in other ways too, after all. My concerns regarding gun violence didn’t come all of a sudden. They emerged over time. Maybe it’s the same for you.

Many of us are growing weary; we have gun-violence fatigue. We don’t want to grow numb, but it’s hard to stay heartbroken and outraged when so many lives are lost each day. Like many of you, I grew weary—not hopeless, but weary—of violence.

From Outreach Magazine  What You Need to Know About Millennials, Gen Z and Social Media

Most of us have been touched by gun violence in some way, so let’s honor the massive pain that exists in our world—in our schools, on our streets, in our hearts. The right place to begin seems to be a deep lament. All is not well in the world, and we need to allow the blood that God hears crying out from the ground to affect us. We need to listen to that pain. Let’s begin by mourning the lives that have been lost—by homicide, by suicide, by accident and on purpose. Every person is created in the image of God. And every one of those lives, from Abel to my pal Jason, who was killed in elementary school, is a child of God. Every time a life is lost, we lose a glimpse of God in the world, for each one of us is an image-bearer of our God.

I (Mike) started facilitating this conversation when I founded RAWTools (RAW is “war” flipped around). One of my friends was a gun owner who began to question why we have assault rifles on our streets. He owned a number of guns, and one of them was an AK-47. After the 2012 shooting at Sandy Hook Elementary, which claimed the lives of twenty kids and six adults, he donated the AK-47 so that it could be destroyed and repurposed. My dad and I met with a blacksmith and learned how to create garden tools from that AK-47—and RAWtools was born.

We all need to work together. In fact, an overwhelming majority of gun owners are concerned about gun violence. They aren’t necessarily the loudest voices in the NRA, but they are by far the majority. That’s good news, and it is also critical to remember.

This book is not about demonizing gun owners. It is about saving lives and working with everyone who is committed to that.

For those of you who are pastoring churches, issues like this one require a special sort of grace and patience—and courage and wisdom and prayer. We want to encourage you to see this as a moral, spiritual, pro-life issue. Pro-life does not mean just anti-abortion. It means standing against death in all its ugly forms and becoming a champion of life consistently, across the board. Stopping gun violence is a pro-life issue. There are those who say, “We do not have a gun problem; we have a heart problem.” We would make a slight change: we have a gun problem and a heart problem.