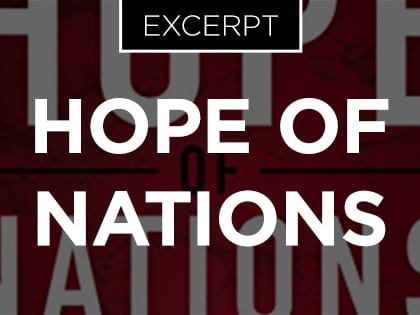 We must shift our thinking from waging a culture war to diplomacy, speaking to our post-Christian neighbors with grace.

Excerpted from
Hope of Nations
By John Dickerson

We can either constantly bemoan the reality that our pagan, non-Christian neighbors are behaving like pagan non-Christians, or we can acknowledge that we are now ambassadors in an ideologically foreign land, in a post-Christian society.

In some ways, our task in America and Europe today is more difficult than the task of a missionary to a people who has never heard of Christianity. We are now missionaries to a culture that has been told lies and half-truths about Christianity—to a land where a growing number of people believe that Christians are historically oppressors, slave masters and inhumane conquerors. It is simultaneously a land that inherits such wealth and comfort that there seems to be little need for help from any “God.”

The once-Christianized United States of America is no longer prevailingly Christian in its ideology, values, culture or aspirations. As Scripture states, those who do not know Christ are indeed blind in their thinking and trapped in a bondage of spiritual oppression. Paul puts it bluntly: “Their foolish hearts were darkened.”

As such, we are interacting daily with pagans who are spiritually as blind and lost as the unreached people groups in the jungles of Papua New Guinea or in remote sub-Saharan Africa. The differences spiritually are that our mission field enjoys the highest standard of living in history and is also prejudiced against Christianity before we ever meet them or open our mouths.

There was once an “American” way of thinking. There was a center for the majority of Americans—a somewhat monolithic set of Christian values that most Americans shared. Back in that era, we Christians could expect that our neighbors would know basic truths about Jesus, the Bible and Christian morality. Our neighbors respected the concepts of church, pastors and the Bible. Connected to these were aspirational morals such as faithfulness in marriage, honesty and charity.

Many of us—and many of our churches—still operate from the assumption that our neighbors share these and related “American” values. But this is no longer the case. We are now surrounded by foreign thought tribes in the United States. Each tribe has a competing ideology—atheism, Islam, Post-Truth pluralism and so forth. Even in the Midwest and the South, where some of the old Christian values remain intact, these shared values are consistently melting away as a result of the Post-Truth shift.

From Outreach Magazine  Is the Online Church Really the Church?

If we assume that our American neighbors share our values, assumptions and language, we will become frustrated with their thinking, their conclusions and their behavior. Very simply, our neighbors are viewing reality through the lenses of their post-Christian and Post-Truth ideologies.

But we must become more intentional, more spiritual and more biblical in our posture toward our neighbors. Do we believe that almighty God placed us here and now for a purpose? If we believe the Word of God, we will choose to believe that we are “foreigners and exiles” here on earth. The United States is an important and noble citizenship. However, the United States is not our highest citizenship. As Scripture states, “But our citizenship is in heaven. And we eagerly await a Savior from there, the Lord Jesus Christ.”

Why has God left us on planet Earth after we’ve trusted in Christ? Why were we not immediately teleported to heaven at the moment of salvation? The answer is that God has work on earth for us to do. We continue the work that God the Father gave to Jesus and that Jesus has now given to his “body,” the church. In the remaining fifty years, fifteen years or five years that each of us has on earth, God has called us to be diplomats and ambassadors from heaven.

Where we cannot do this directly, we can invest into ministries that are. Our aim on earth is not to store up as much disposable wealth as possible and be as comfortable and secure as possible; our aim is to be successful diplomats from heaven to earth. No passage better summarizes this than 2 Corinthians 5:18–20 (emphasis added):

“God … reconciled us to himself through Christ and gave us the ministry of reconciliation … And he has committed to us the message of reconciliation. We are therefore Christ’s ambassadors, as though God were making his appeal through us.”

The most significant posture change we Christians can make in the Post-Truth era is this: We are not here to attack or fight our neighbors when they disagree with us; we are here to be diplomats and ambassadors to them. Diplomats are not surprised when cultural differences cause confusion or even suspicion from the people they hope to reach. Diplomats take the time to understand the values, assumptions and culture of the people group to which they are called.

From Outreach Magazine  Theology for a Troubled Believer

Where our human response would be anger or defensiveness, God has a better way. He does not call us to be aggressive in our posture toward those lost in spiritual darkness. Instead, he calls us to be ambassadors to them. This does not mean we lack courage or conviction (we will see plenty of courage in the other manifestos), but it does mean we exhibit tact, patience, kindness and a winsome, diplomatic manner in dealing with non-Christians. It means we have compassion for their brokenness. We have patience for their spiritual blindness. It means we become intentionally diplomatic rather than reactionary and defensive.

In other words, we will adjust our expectations. We will acknowledge that we are now cross-cultural ministers within the United States. Whether we have a relative who identifies as LGBTQ, a neighbor who identifies as Muslim or a coworker who identifies as “open to everything” (that is, a Post-Truth thinker), in all of these cases we are doing ministry that must cross over the boundaries and barriers of conflicting cultures, of contradicting ideologies.