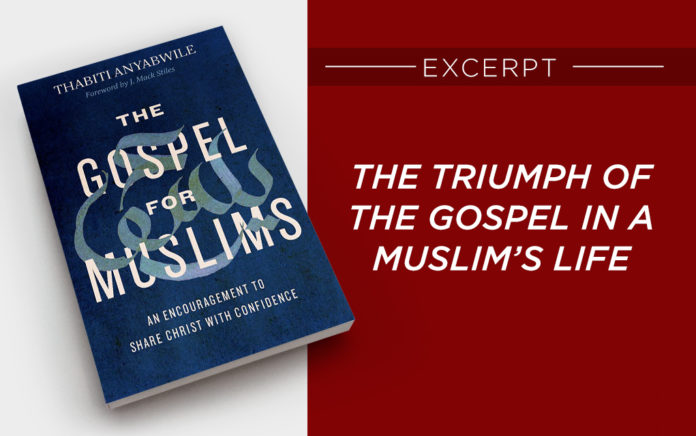 The Gospel for Muslims (Moody Publishers)

Excerpted From
The Gospel for Muslims
By Thabiti Anyabwile

I sometimes think Christians doubt this wonderful truth—that the gospel is the triumphing power of God in the lives of anyone and everyone who believes. We sometimes seem to think that certain people are beyond the saving reach of the gospel. Too often we certainly seem to think that the Muslim is beyond gospel reach and impervious to gospel power.

But contrary to our unbelief, the gospel of Jesus Christ is indeed triumphing in the hearts, minds and lives of countless men and women from various Muslim backgrounds. I am one such person.

I’ve spent a significant portion of my life lost. Being separated from God by my sin, I’ve been dedicated to many activities, thoughts and attitudes contrary to the gospel. But this was never truer than when I lived as a practicing Muslim.

I converted to Islam while a sophomore in college. In the years leading up to my conversion, I had grown angry with life. My father left our family when I was about 14 years old. I was angry with him. Just before my junior year in high school, I was arrested, and many of my friends distanced themselves from me. I was angry at them as well. Between my senior year in high school and my freshman year of college, I discovered 1960s radicals like Malcolm X, Amiri Baraka and a host of others. They made me angrier. As I read the history of Africans and African Americans, I grew angry toward white people in general. By the time I completed my freshman year of college, I was a young, hot-headed militant seething with not just anger but hatred.

It was Islam that promised a way of handling and using that hatred. That’s what it promised. But in my experience, what it delivered was far different.

My anger and hatred toward whites found an easy and ultimate representative target in a blond-haired, blue-eyed Jesus. Though I expressed respect for the “real Jesus,” who was a prophet of Allah, I was an enemy of the cross. I delighted in opposing Christian students on campus and launching any argument I could against Christianity. I denied the resurrection and harangued as simple-minded fools those who believed it. Christianity was a great plot by the misguided and deceitful “followers” of the “real Jesus.” I was zealous for Islam, “the perfect religion for the Black man.”

As a Muslim, I had devoured as much of the Quran as I could. The Quran taught plainly that Jesus was born of a virgin with no earthly father (Sura 3:42–50). The Quran taught plainly that the Torah, Psalms of David and the Gospels were books revealed by Allah (Sura 4:163–65; 5:46–48; and 6:91–92). And in many passages, the Quran—written approximately 600 years after Christ and the apostles—expressed such confidence in these sections of the Bible that it called people to judge the truth using the Bible (Sura 3:93–94; 5:47; and 10:94). And nowhere does the Quran teach that the Bible was corrupted or changed, only that some have covered its meaning, misunderstood it or forgotten the message. So, for me, any Muslim desiring to be consistent and intellectually honest had to come to grips with the teaching of the Bible.

And when I went to the Bible—first assuming I’d find things confirming or pointing to the Quran, and then growing desperate to find the supposed prophecies that point to Muhammad—all my assumptions were confounded and without basis. Islam was not true. Islam’s claim to be the final and seal of all religions, its prophet the final and seal of all prophets, simply did not hold water.

My sin was real and Islam offered no real solution for it.

I had believed Islam’s account of the development of religion and society—“Judaism is the elementary school, Christianity the high school, but Islam the university.” Islam had strong-armed me into believing that all of life’s needs and questions were answered by its system of laws and rituals. A false theology and ideology had dominated my life.

By the time I emerged from this period of study and exploration, I was convinced that Islam was not true. More than that, I was fairly certain that all religions were false. Rather than turn to Christ, I turned to the pursuit of the world and decided to trust myself rather than God.

During this idolatrous pursuit, the Lord intercepted and humbled me when my wife miscarried our first child. I sat in a mild depression watching television. For reasons I could not then explain, I sat transfixed as a television preacher expounded 2 Timothy 2:15. It wasn’t a particularly evangelistic message, but life and power had filled this sermon on studying God’s Word and Christian habits of the mind.

Eventually, my wife and I visited the church where this pastor served. We sat seven or eight rows from the pulpit. Crowded into a church service of some 7,000 or 8,000, I felt as if the preacher and I were the only people in the room.

The sermon, taken from Exodus 32, was titled “What does it take to make you angry?”. Imagine that. The first time I, having been consumed with anger for well over a decade by then, entered a church since becoming a Muslim, the preacher addresses anger. But it was not what I thought. The sermon carefully examined sin, idolatry and their consequences. The pastor challenged the congregation to develop a righteous, godly indignation toward sin, to hate sin, and to turn to God.

I sat gripped as the holiness and justice of God were unfolded from the Scripture. I grew strangely remorseful and alert, awakened really, as the pastor applied the doctrine of sin to his hearers. I was convicted, guilty before this holy God who judges all unrighteousness.

Then, with plain yet beautiful speech, the preacher exalted Jesus. Here was the Lamb of God for us to behold. Here was the sacrifice anticipated in the Old Testament and executed in the New. Here in Jesus was redemption. The sinless Son of God had indeed come into the world to save everyone who believes—even a former Muslim who was an avowed and determined enemy of the cross.

The gospel is the power of God for salvation to everyone who believes. I’ve seen that power displayed in the faces of people from Muslim backgrounds in America and the Middle East. I’ve experienced and received that power myself through faith in Christ.

And I trust that this same gospel in your hands will produce the same conversion and new life in the Muslim people that the Lord places in your path. I want my story to encourage ordinary Christians in the extraordinary power of the gospel.

Excerpted from The Gospel for Muslims: An Encouragement to Share Christ with Confidence by Thabiti Anyabwile (©2018). Published by Moody Publishers. Used by permission.