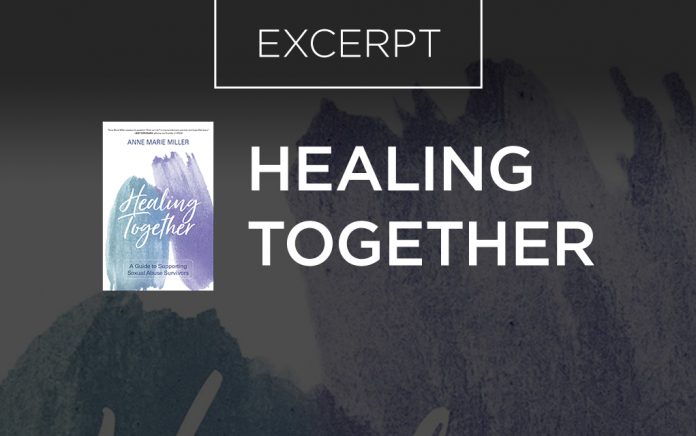 Reporting is an essential step we must take whenever childhood sexual abuse comes to light.

Excerpted From
Healing Together
By Anne Marie Miller

Responding personally and organizationally to childhood sexual abuse is critical. Whether it’s responding to the child, to law enforcement, or to some other entity involved, how we respond carries great weight with the survivor, their family, our church or organization, and our community. So what should you do when someone comes to you with a report of child sexual abuse?

I understand there are many perceived barriers to reporting. By reporting the crime, life will never be the same for you (the reporter) and of course for the perpetrator, but keep in mind, the child’s life is already forever changed. The child’s life has already been significantly altered at this point, and by reporting, you are turning the tables so that justice can be served and other children can be protected.

Most law enforcement agencies have units dedicated to crimes against children and also offer services to victims to help guide them through the next steps of the criminal process. Sometimes these services even offer funds for counseling or other medical assistance. I was surprised by how many resources were available to me after I reported my abuse to authorities.

Some fear (or guilt) may come into play when reporting gets another person “in trouble,” especially if the sexual abuse occurred within a family. Or a child may be afraid to be taken away from their loved one. Older children may have heard horror stories about what happens in prison and don’t want to subject their loved one to that. Breaking up the family is a huge burden that comes with reporting childhood sexual abuse within a family. Since perpetrators are generally known to the child, the child may be afraid of getting a family friend, pastor or other trusted adult in trouble or causing harm to the abuser’s family. Children almost always believe the abuse (and the resulting consequences) is their fault because children have a hard time reconciling the fact that someone they love and trust did something so bad and wrong.

The idea of not being believed is another fear many children have about coming forward, especially when the person who abused them is well-liked or respected in their social circle. A girl I mentored kept her abuse a secret for 10 years. Her uncle abused her, and in response to her experience, and without the benefit of good counseling and care, she acted out sexually and used drugs as an outlet to numb herself, gain control and escape her reality. When she decided to come forward, her family sided with the uncle because he was such a “family man” and the girl was thought to be a troublemaker.

Unfortunately, this happens a lot. In these situations, it’s key to reassure the child that any consequence of the abuse rests on the abuser’s shoulders—not the survivor’s.

I’ve had to tell myself this many times over the years. One of my greatest burdens (and one of the reasons I had such a difficult time coming forward to the Christian organization and to law enforcement) is because I knew Mark’s family had to be suffering. His parents, his home church, his wife, his kids, his friends, his coworkers … they are all likely grieving too, and that grief is real. This has been one of the most emotionally difficult things to walk through. As Paul says in 1 Corinthians, “If one part [of the body] suffers, every part suffers with it” (1 Cor. 12:26). I didn’t want to be the cause of that suffering. But the truth was, I wasn’t. I simply shed light on suffering that had already occurred.

As we said earlier, it’s important to believe someone when they share their abuse with you. It takes a great amount of courage for an adult to open up, so imagine how much more courage a child has to muster, not fully grasping the scope of what’s happened to them. It is highly unlikely that a child would lie about abuse.

In recent years our society has had many scandals involving church leaders, and many of the responses have been dismissive of the victim and supportive of the abuser. This causes significant damage to the victim and other survivors. Interestingly, we’ve also seen a lot of apologies and backpedaling from the same church leaders when they realize (or have been told by lawyers or law enforcement) that their earlier response of supporting a perpetrator is wildly inappropriate. We cannot and should never excuse the sexual abuse of a child, or defend it, or cover it up in any way. When you’re told about potential abuse, use discernment and discretion with which adults you tell outside of law enforcement. It can be easy to jump into the “prayer/gossip” loop, but your energy should be spent on ensuring that the child is cared for and that the alleged abuser is removed from working with or having access to children until professionals (law enforcement or CPS, not pastors or leaders) determine what steps, if any, should be taken.

From Outreach Magazine  Understanding the Human Element of Poverty

As supporters, churches and organizations seeking to support and care for abuse survivors, remember this when an accusation is brought to your attention: It is not your responsibility to determine whether an allegation is credible. Research indicates that we are inherently biased toward people in our social circles. It’s easier to simply deny that people we know, especially people we perceive to be good or holy, could have committed such evil crimes when faced with the alternative of reporting them. No matter how hard we try, we simply can’t be objective, so bringing in a third party such as the authorities to do the investigating—more so, who are trained to do the investigating—is a far better response than investigating ourselves.