Home Resources Books How Do You Get a Fairy Tale Marriage? 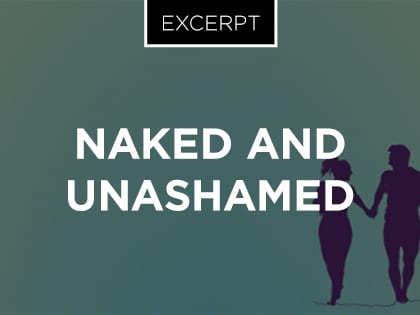 Fairy tale love stories don’t just happen; what we put into marriage is, in a very real way, precisely what we get out of it.

Excerpted From
Naked and Unashamed
By Jerry Root, Claudia Root and Jeremy Rios

A few years ago the world watched enrapt as Prince William and his bride Kate Middleton spoke their vows before the Archbishop of Canterbury. Their story—the prince who falls in love with a common girl—is the very substance of fairy tales. The extravagance of their event—from horses to plate ware—was the stuff of Disney. One friend of mine even woke up at 3 a.m., got a hat out of her closet, thawed a scone, brewed a cup of tea and watched the wedding. Why would she do that? Because we love—we crave—fairy tales, and silently we wish that they would be true for us.

It is unlikely that any who read this book will be married by an archbishop, and few will be wed in a venue as magnificent as Westminster Abbey. Princes are rare these days. But on a wedding day, no matter how small or seemingly insignificant, a group of families and friends will gather to witness a fairy tale no less marvelous than the one people inconvenienced themselves to see some years ago. On their wedding day a boy and a girl make a promise in the presence of God and witnesses. It is a moment that is, for all involved, a miracle of vast and indescribable proportions. On your wedding day you solemnize the fairy tale that God is working in your lives.

On their wedding day, a bride and groom stand to mark the beginning of their marriage. They are saying, in the presence of God, “I am going to write the story of the rest of my life with you.” Nobody there will know the ending of the story. Nobody can predict the dangers and turns a couple must face. Whether the couple’s fairy tale has a happy ending or a sad one is their decision, and their work. And as with all fairy tales, it is the end of the story that gives meaning to the events within them.

As a matter of fact, there is one immutable fact about fairy tales: There are always trials to be gone through—a forest to cross, a wolf to defeat, an enemy to kill. Take the trial—the necessary work—out of the fairy tale and you no longer have a fairy tale. “Once upon a time there was a girl named Little Red Riding Hood who took food to her sick grandmother and came back home for tea.” This doesn’t make a good fairy tale at all. But the necessary trials of the fairy tale—the forest, the fearsome wolf, the huntsman—are given meaning and significance by its ending. It is only when the story is over, only when we look back, that we call it a good story; never before.

From Outreach Magazine  Seeing Your Worth Clearly

Perhaps some images can assist us to better understand this necessary work. Many people dream about purchasing a house, which they will turn into a home. In anticipation they invest time and energy into thinking about what kind of place they’d like to have someday—maybe they make lists of the kinds of characteristics they’d like it to have, its size, shape, number of rooms, the kinds of memories they’d like to have there. Then they shop together for this dream home. After the search— whether long or short—they finally find the home they want. And they purchase their perfect home and move into it, filling it with their things.

A successful homeowner inherits many responsibilities; there are chores to be done, gardens to be tended, window sashes to be painted, garbage to be taken out, roofs to be repaired, pipes to be plumbed, wiring to be watched over and an untold number of details to be managed. But imagine with me if, after moving into this dream home, the couple fails to maintain it. Imagine if they never take the time to mow the lawn. After a couple of weeks go by and the neighbors will grow less friendly in their reminders, suggesting to you that if you won’t mow your lawn, would you at least consider harvesting it? Imagine never keeping up on any of the maintenance of the house—if the drains get stopped up and you never clear them; if the wiring frays but you don’t repair it; or as the roof deteriorates you don’t replace it, but place strategic buckets along the corridors and in the bedrooms. Imagine the yard resembling the set of a Tarzan movie. Imagine the plaster falling off the walls, wallpaper peeling, mold and other fungi growing in the corners and recesses.

What has happened to the dream home? That couple spent so much time making the perfect choice—and now their dream home is a dilapidated remnant.

Consider also the glorious leaves of autumn, especially as they display themselves in the Midwestern and Eastern United States—trees set aflame with burning red, trees with yellow to rival the sun and all the colors in between as well—oranges, russets, salmon, shrimp, maroons, peach and auburn. But not long after this glorious display, these same leaves, now simply brown, are scattered everywhere and become a terrible, brown mess. Next time this happens go for a walk together, and pay attention especially for a yard, in the midst of all the others, that has no leaves at all—one that has been raked clean. When you come across that I think you’ll find that there’s something breathtaking about that sight; what is more, it didn’t just happen.

Now, consider as well an elderly couple, still in love. Helmut Thielicke, German theologian and pastor, once observed such a couple who, after many years of marriage, still had a light in their eyes for one another. He observed them both carefully, noting the tenderness in their expressions toward one another. This intrigued him, and since he had known the couple for many years he was well aware of the authenticity of their love. It wasn’t until he had left their home that he realized a truth: This couple had the marriage they deserved. His mind went to Genesis 2, where Adam declares that Eve is “bone of my bone, and flesh of my flesh.” Adam might as easily have said, “this is boredom of my boredom, lovelessness of my lovelessness.” The choice therefore belongs to each couple precisely what kind of marriage they are going to have, and in view of this a man and woman can choose to say to one another, “This is now wonder of my wonder, fascination of my fascination, delight of my delight.” What we put into marriage is, in a very real way, precisely what we get out of it. Maybe you’ll encounter such a couple one day—gray hairs and wrinkled hands and paper-thin skin stretched across bony joints; but they are together, and you will note that their affection represents a lifetime of work on their relationship. Their love is also breathtaking. It didn’t just happen. They did something to make their love possible.

The fairy tale home, the fairy tale yard and the fairy tale marriage—none of these things just happen. And in all three stories, people performed the necessary work that brought meaning to the labor, the trial, the effort involved. We judge a story good by its conclusion, and so also a marriage.