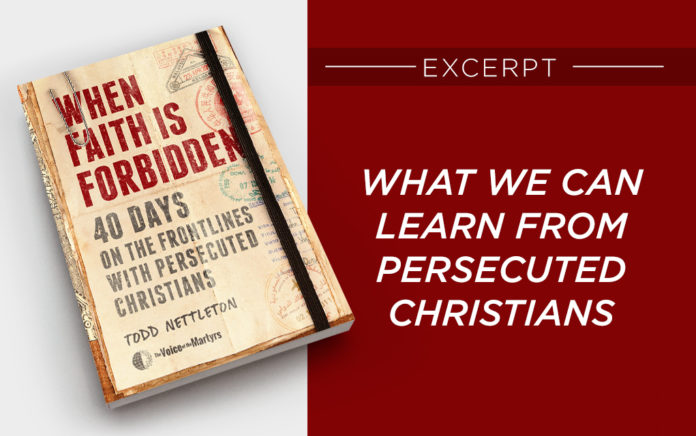 Excerpted from ‘When Faith Is Forbidden’ (Moody)

Excerpted From
When Faith Is Forbidden
By Todd Nettleton

We’re leaving for the airport in 25 minutes. I hope you’re ready. I’m rushing around my house, trying to figure out how to get my suitcase closed and which things in it I won’t actually need on the trip. I check my phone again to see what the weather is predicted to be: the warm jacket takes up a lot of suitcase space. Will I need it? Will I need a nicer pair of shoes for church? Is anyone going to expect me to be wearing a tie?

Every extra item prompts a tiny cost-benefit analysis. Yes, it would be nice to have my running shoes in case the hotel has a fitness center. But they take up precious space. Yes, I’d love to have my personal Bible, but my traveling New Testament is much smaller and lighter—and I have the whole Bible on my phone if I need it. And I always hope to have a little bit of extra space when I leave, because invariably I come home with a small souvenir for my wife or a gift for my sons (when they were young, their favorites were swords, knives, or any sort of weapon!) and daughters-in-law.

As the son of missionaries, I grew up in a traveling family. The packing rules were simple: if you can’t carry it yourself, you can’t bring it. This was sometimes tested, such as when we carried silverware for twelve to Papua New Guinea—in our carry-on bags! I still try to follow that rule: one medium-sized checked bag and one carry- on, which has my camera, headphones, and eBook reader, as well as various and sundry power-adapter cords and hopefully a snack and a spare shirt, because there’s never a guarantee your suitcase will arrive the same time you do.

Early on in my time at The Voice of the Martyrs, I had a very different idea about visiting persecuted Christians. I remember on my first VOM trip to China, our team was going to meet a pastor who’d been arrested multiple times in the previous three months. He led a large unregistered church that met on Tuesdays, and police and Religious Affairs authorities had taken to arresting him each Tuesday morning so he couldn’t lead the services. They’d hold him all day, or even overnight, then let him go, just so he couldn’t lead his growing flock.

So as we went to visit, I had a picture in my mind of this poor, abused pastor. I thought how much of a blessing it would be to him for foreigners to come and cheer him up, because he’d no doubt be feeling deeply discouraged. My ideas couldn’t have been much further from reality!

When we arrived at his apartment, he was smiling and joyful. He was thrilled that people in his area were meeting Jesus Christ, thrilled his flock was growing. If the price of effective ministry was a few measly arrests or a few nights in jail, then so what? It was worth it to see lives changed and Christ’s kingdom grow.

I remember clearly how he showed us the bag he took with him to church: it had a blanket and a change of clothes. It was his jail bag, and he was packed and ready to go.

I turned to his wife, sitting to the side as we sipped cups of tea. “Don’t you worry about him?” I asked, pointing to the pastor.

“Why should I be worried?” she answered through the translator. “God will take care of him.”

Since that trip, I have different ideas about my travels. While persecuted Christians greatly enjoy fellowship with other believers, they don’t need me to cheer them up. In fact, often in their presence, I wish for much more of the joy that shows on their faces and in their lives. I go to hear their stories. I go as a learner, wanting to know more about their faith and their walk on their journey toward home—“a better country, that is, a heavenly one.” And when I get back to my earthly home, I want to tell the story of their amazing faith.

I hope the testimonies of our persecuted family members will bless and challenge you. And I hope they’ll make you think more about our true home, and about the path you’re on to get there.

From Outreach Magazine  Walking Through Infertility

Here’s one such story that changed my mind in profound ways and I hope it will do that for you, too.

Sister Tong hosted an unregistered church meeting in her home in China. Churches there are required to register with the government and come under control of the Communist Party’s “Religious Affairs” officials. A church that registers is told when and where they’re allowed to meet, and who is allowed to lead those meetings. Children under 18 aren’t supposed to attend. All religious activities are expected to take place only as approved by the government.

Any gathering of Christians outside this system and without government approval is an “illegal religious gathering.” Those caught at such meetings are subject to interrogation, arrest, and detention. But as a practical matter at that time, Public Security Bureau officers focused mostly on hosts and leaders, rather than trying to arrest every single person caught attending. So Sister Tong, who hosted such a gathering in her home, was arrested and sent to prison for six months. It was an effort by the government to “re-educate” her to think more like a Communist and less like a person who has put on “the mind of Christ” (1 Cor. 2:16).

Sister Tong came to meet with us at a location where we could have some privacy; it would certainly create even more trouble for her if she was caught meeting foreigners. She was small, with tiny shoulders. My wife, who is five feet seven inches tall, seemed to tower over Sister Tong. We greeted her and exchanged pleasantries and small talk through our translator. Then I got out my recorder to begin the interview.

First question: “So tell me about the prison.”

I was thinking we’d set the stage for her story by diving right in to her suffering. I expected to hear colorful details about how difficult prison life was: the bed was so hard, the food was so terrible, the rats were so big! I waited expectantly as the translator turned my question from English into Mandarin. The recorder was running; my pen was ready to capture every detail of the picture she would paint with her words.

When Sister Tong heard my question from the translator, her face lit up with what I can only call a heavenly smile. She said something to the translator in Chinese. He turned to us.

“Oh yes. That was a wonderful time.”

I turned to the translator. Now I was confused. I’d asked about prison, and Sister Tong got this huge smile on her face and said it was wonderful. My translator must not have understood my question. Something had misconnected, hadn’t it? Because, in my understanding, there was no way anyone would ever say that prison was wonderful. Right?

The translator assured me that he had translated my question—and her answer—accurately. “Oh yes. That was a wonderful time.”

I definitely had more questions for Sister Tong now. How could prison be wonderful? What was it about the experience that would bring such a smile to her face when she thinks back on it?

She was only too happy to answer.

Prison was wonderful because God was there with her! Sister Tong shared how close, how special, her relationship with Jesus had been in prison. It was like He paid extra attention to her during that time and her heart was warmed daily by His exceptional presence and touch. She felt so close to the Creator of the universe in prison that it was hard to think of that time as anything other than wonderful.

And it wasn’t just Christ’s presence; He’d also allowed Sister Tong an amazing ministry in prison. She’d had the opportunity to lead several cellmates into relationship with Christ. What could be more wonderful than seeing someone snatched from the kingdom of hell and brought into the eternal Kingdom of Jesus Christ?

Oh, yes. That was a wonderful time.

My conversation with Sister Tong changed me. It changed my mind in some profound ways. Before that conversation, I really didn’t have a frame of reference that could even consider going to prison as something wonderful.

You see, going to prison was suffering, and suffering is to be avoided if there is any possible way to avoid it, right? But Sister Tong hadn’t avoided suffering, and in fact when she thought back on it now she got this amazing smile on her face, as if she’d just peeked through the keyhole into heaven.

The translator didn’t mess up the question, or the answer. But Sister Tong messed with my mind that day. She changed the way I think about prison and suffering. She opened my eyes to the fact that even the “worst” places on earth could be places of blessing and God’s presence. They truly could be wonderful.

I am often floored by the high price our brothers and sisters in hostile and restricted nations are asked to pay for following Christ, when I and so many Christians in the US are asked to pay so little. I’m even more amazed when they pay that price not grudgingly, or with frustration or disappointment, but with a pure, unfiltered joy.

Perhaps these brothers and sisters have grasped a truth that we need to be reminded of. The privilege of walking with Christ, forgiveness of sin, the promise of heaven—that privilege is worth everything. Think of the parable of the treasure in the field: the man who found the treasure sold all he had to own it. But he didn’t do so hesitantly; he sold it all “in his joy” (Matt. 13:44).

Does your life and walk of faith exhibit that same joy? Are there cares and burdens weighing on you? What are they? Are you willing to “cast” those burdens onto the Lord? For most of my work-related trips over the past twenty-three years, the best part of the trip is the end. I love coming back home to my wife and sons! The flights home always seem so long, like they might never end. Or maybe I’m just impatient to hug my wife, sleep in my own bed, and unpack both my suitcase and the stories I have from the journey.

I hope you’ll spend some time unpacking the stories we’ve shared and, more importantly, the lessons God may be teaching you through the examples of persecuted believers around the world.

Excerpted from When Faith is Forbidden: 40 Days on the Frontlines with Persecuted Christians by Todd Nettleton with Voice of the Martyrs (©2021). Published by Moody Publishers. Used with permission.