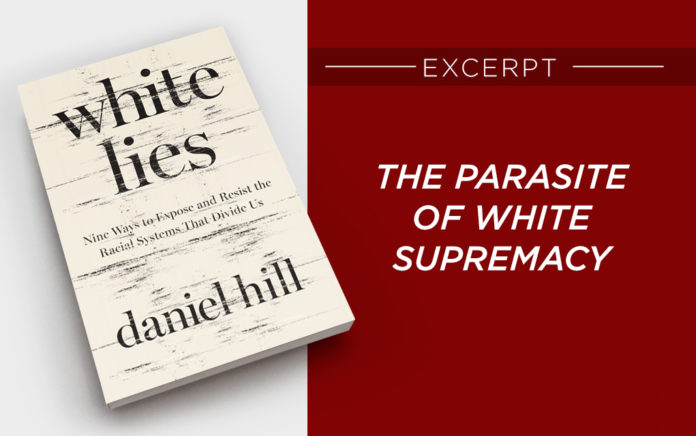 Excerpted FromWhite LiesBy Daniel Hill It’s not likely you meditate on the idea of parasites often—really, why would you? But when it comes to the core message of this book, it’s the perfect place to start. Let’s begin with some important facts that may be helpful to know about parasites. For instance, did you know: […]

It’s not likely you meditate on the idea of parasites often—really, why would you? But when it comes to the core message of this book, it’s the perfect place to start.

Let’s begin with some important facts that may be helpful to know about parasites. For instance, did you know:

• A parasite is an organism that lives within another organism, typically referred to as the host.
• Without a host, a parasite is unable to live, grow, and/or multiply. For a parasite to survive, the host must survive as well.
• Parasites are never beneficial for the host. They thrive by stealing the resources of the host.
• Parasites are incredibly difficult to detect. For example, 70 percent of parasites are not visible to the human eye.
• A parasite and its host evolve together. The parasite adapts to its environment by living in and using the host in ways that sustain the parasite’s existence while continuing to harm that of the host.

Now that we have become pseudo-experts on parasites, what does it all mean?

Let’s jump over to Dr. Willie Jennings, who is considered to be one of the premier public theologians in America, particularly with regard to race and Christianity, and who has written a number of seminal books on the subject. When Dr. Jennings speaks about white supremacy, I am quick to listen.

When describing the nature of white supremacy, here’s the shorthand image he uses: It is a parasite.

That’s provocative enough, but it also elicits an immediate follow-up question: If white supremacy is a parasite, what is the host it has embedded itself in? Dr. Jennings’s claim? Christianity.

Wow, what a picture! To help us gain an immediate and visceral image for understanding the historical reality of white supremacy, he suggests we think of white supremacy as the parasite and Christianity as the host it has embedded itself in for protection and survival.

With that in mind, look again through the list of key facts that describe parasites. Instead of reading them in a general way, consider the detailed application of white supremacy as a parasite and of Christianity as the host it is embedded in. It’s a terrifying exercise. We will explore the full meaning of this parasitic relationship throughout the book, as well as the white lies that sustain this relationship, but allow me to immediately highlight one serious and urgent facet of this unholy alliance. One of the greatest threats facing American Christianity is the severe divide along racial lines that continues to grow more severe with each passing year. The 2016 and 2020 elections served to bring the divide to the forefront, but these are only one of a dozen indicators that highlight the same reality.

From Outreach Magazine  Finding Your Route to Spiritual Formation

I would contend there is no factor that plays a bigger role in this divide than the inability of white Christians to meaningfully process this parasitic relationship between white supremacy and Christianity. Similar to the growing polarization we see on many fronts, white Christians tend to move toward one of two opposite poles when they are exposed to this parasitic relationship.

At one end of the extreme are those of us who have been conditioned in such a way that we either cannot or will not honestly acknowledge that white supremacy has found a way to parasitically embed itself in Christianity. Those of us in this group have never learned to carefully parse the one from the other, and as such, we lack the critical thinking skills that are necessary to decouple white supremacy from white Christianity. Therefore, when we hear someone attack white supremacy, we often interpret it as an attack on our faith itself. The tragic result of this failure is that we end up defending not only the Christianity we love but also the white supremacy we should despise.

At the other end of the extreme are those of us who have learned to identify the parasite of white supremacy, as well as its fusion with Christianity, but who have used that insight as a basis for outrightly rejecting Christianity. Rather than doing the hard work of analyzing the sinister manner in which it has embedded itself to Christianity and evaluating what Christianity says about an evil ideology like white supremacy, this group often chooses to settle for an oversimplified caricature of the Christian faith. In this way, the group’s inability to decouple the one from the other repeats the same failing result as those representing the first pole.

From Outreach Magazine  J.D. Greear: 'You Never Get Above Serving'

The fallout from these intensifying poles is catastrophic. It divides the church, compromises our collective witness, and renders us useless in the fight against white supremacy.

This is why the message of this book feels so urgent. The only reason this parasitic relationship has lasted so long is that it is shrouded in a cloud of lies. As white Christians, we have lost our ability to tell the truth about the parasitic presence of white supremacy within the faith we love, and as a result, we don’t know how to move forward, even when we believe we are ready to.

Therefore, the purpose of this book is to grow in our ability to tell and apply the truth of Christ and his kingdom to the problem of white supremacy. It is to expose the lies that allow this parasitic presence to survive generation after generation. It is to resist the racial systems that continue to divide us. It is to position us as active participants in the work of the risen Christ, who is bringing the good news of God’s kingdom—a kingdom that will ultimately dismantle the kingdom of white supremacy.

Excerpted from White Lies: Nine Ways to Expose and Resist the Racial Systems That Divide Us © 2020 by Daniel Hill. Published by Zondervan. Used by permission.