Home Resources Books Is Pacifism Based on a Naive View of Human Nature? 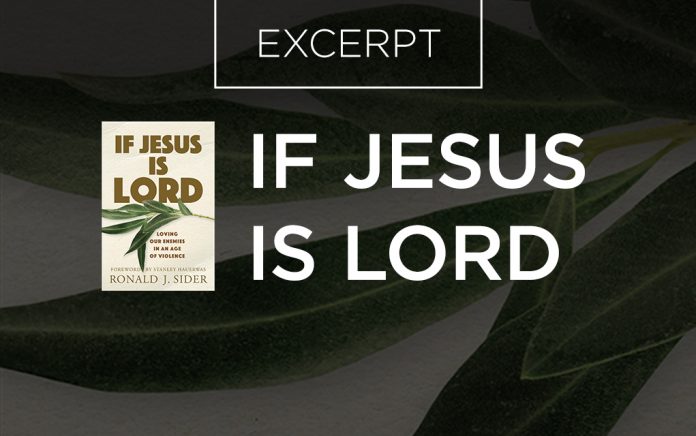 Also, is war an inevitable reality of human sinfulness?

Excerpted From
If Jesus Is Lord
By Ronald Sider

Many Christians claim that pacifism is based on a naive view of human nature. It is a central argument in Niebuhr’s famous essay “Why the Christian Church Is Not Pacifist.” “Most modern forms of Christian pacifism are heretical. … They have really absorbed the Renaissance faith in the goodness of man, [and] have rejected the Christian doctrine of original sin as an outmoded bit of pessimism.” Weigel says that religious pacifists tend to “minimize the abiding fact of sin and brokenness in the world.” So too J. Daryl Charles: “Pacifists tend to underestimate—if not disavow—the extent to which sin introduces conflict into the world.” And even more sweepingly Loraine Boettner says, “Most pacifists ignore completely the Scripture’s teaching that we enter this world members of a fallen race. They assume rather that human nature is inherently good.”

The first thing to say about this charge is that it is true of some pacifists. Mahatma Gandhi, Leo Tolstoy and some Quakers have embraced an unbiblically optimistic view of human nature. The famous 19th century Unitarian pacifist William Ellery Channing naively claimed that the world is progressing, year by year, closer and closer to blissful shalom. Niebuhr rightly charged the theologically liberal pacifists of his day with embracing a naive, optimistic view of human nature.

But there are many other pacifists who embrace a biblical understanding of the depth and persistence of human sin. Prominent pacifists like Hauerwas and Yoder do not ground their thinking in a naive view of human goodness. The pacifism promoted in this book is based on the center of historic Christian orthodoxy, including the theological conviction that since the fall, all persons have a pervasive inclination to selfishness. Only the liberating power of the Holy Spirit can transform self-centered sinners into persons capable of beginning to truly love their enemies. Biblical pacifism is grounded in supernatural grace, not natural human goodness.

Even while enjoying the presence of the Holy Spirit, Christians never achieve perfection in this life. But they know that they have been called and empowered to begin to live now the ethics of Jesus’ dawning kingdom. With Paul, they know that sin still lurks within them, but they also know that Paul never argued that because sin still lingers in the Christian, it is acceptable to fornicate, lie and steal. Why, then, should we argue that the persistence of sin even in Christians would justify ignoring Jesus’ clear call to love our enemies?

From Outreach Magazine  What COVID-19 Exposed

Another aspect of human sinfulness is relevant here. There is a questionable logic in the suggestion that since all persons are deeply sinful, war is inevitable.

This is not to claim that it will be possible to eliminate all war. But it does mean that the mere fact that all persons are sinners does not mean that warfare happens everywhere constantly. It is more likely to happen in certain circumstances rather than others, and sinful persons have the freedom to make choices that reduce the likelihood of it happening.

For centuries, people assumed that slavery was a necessary part of sinful human civilization. Then economics and societal thinking changed, and most societies outlawed slavery. Two centuries ago, dueling was an accepted way for (sinful) gentlemen to resolve a dispute. Today the same sinners normally resolve disputes nonviolently through the courts. That is not to claim that people today are less sinful than persons of earlier centuries. But the form that sinfulness takes has changed. The right kind of societal changes might very well dramatically reduce the amount of warfare in the world. At the very least, it is simply the case that the fact of universal sinfulness does not mean that the level of warfare in the twentieth or early twenty-first century is inevitable.

In an interesting essay, David A. Hoekema, a philosopher in the Christian Reformed tradition, shows how the issue of pervasive human sinfulness might also support a pacifist position.

“Realism about human nature cuts two ways: If it undermines a pacifism based on optimism, it also undermines the assumption that weapons of destruction and violence intended to restrain evil will be used only for that purpose. The reality of human sinfulness means that the instruments we intend to use for good are certain to be turned to evil purposes as well. There is therefore a strong presumption for using those means of justice that are least likely to be abused and least likely to cause irrevocable harm when they are abused. An army trained and equipped for national defense can quickly become an army of conquest or a tool of repression in the hands of an unprincipled leader. But a nonviolent national defense force, or a peacekeeping force bringing together citizens of a dozen nations, is of little use except for its intended purpose.”

History is full of evidence that very frequently—probably almost always—tribal or nationalistic fervor sweeps vast numbers of people into joining every war that their leaders declare. Very seldom have Christians been able to apply the just war criteria in ways that have led them to refuse to fight their tribe’s or nation’s wars. Unthinking sinful tribalism and nationalism overwhelm thoughtful moral analysis. Given this almost universal way that sinful persons irrationally and enthusiastically join their group’s wars, it may very well be that a general moral teaching against all killing would be a more realistic fit with sinful human nature.

Biblical pacifists remember that Christ said there will be wars and rumors of wars until his return. And they also know that ongoing pervasive human sinfulness is the ultimate explanation. But they know as well that sinfulness does not make inevitable a particular frequency of warfare. The right human action could reduce it dramatically. And the most important action would be for Christians to decide to follow Christ’s command not to kill and instead engage in persistent nonviolent challenge to all injustice. If all Christians chose to do that, many would suffer. But the amount of killing and warfare in the world would almost certainly decrease dramatically.

Excerpted from If Jesus Is Lord by Ronald J. Sider, ©2019. Used by permission of Baker Publishing. BakerPublishingGroup.com