Home Resources Books Racial Division: A Problem as Old as the Church 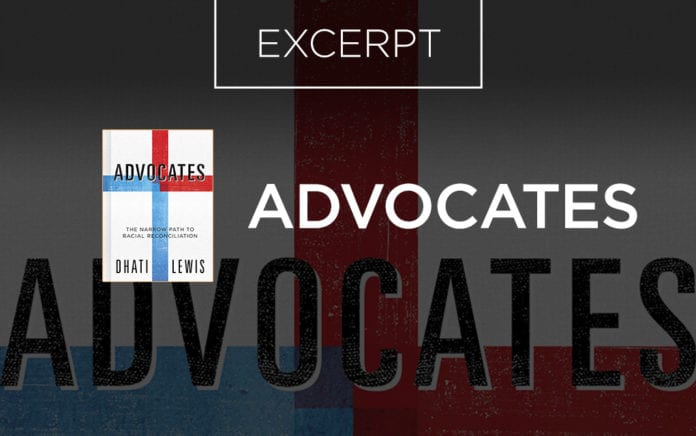 Racial division is not simply a social issue but a moral and spiritual issue.

Excerpted From
Advocates
By Dhati Lewis

Is this a new problem? Are we the first generation to deal with these tensions? Of course not—we can look back to the generation before us in the American Civil Rights movement. But the reality is, it goes back farther than that too. Sadly, racial division is a problem as old as the church itself.

Consider a story from the early church in Acts 6. In this short passage we get huge insights into what God thinks about racial division and how his church should respond. The text makes it clear that racial division is a real problem that demands real solutions that can lead to real transformation. Here’s how the story begins:

“In those days, as the disciples were increasing in number, there arose a complaint by the Hellenistic Jews against the Hebraic Jews that their widows were being overlooked in the daily distribution.” —Acts 6:1

Did you catch that? One racial group was being overlooked by another racial group in the daily distribution of food. This was a real problem. The divisions of the world had crept into the church. And how did the church respond? Let’s look.

“The Twelve summoned the whole company of the disciples and said, ‘It would not be right for us to give up preaching the word of God to wait on tables. Brothers and sisters, select from among you seven men of good reputation, full of the Spirit and wisdom, whom we can appoint to this duty. But we will devote ourselves to prayer and to the ministry of the word.’ This proposal pleased the whole company. So they chose Stephen, a man full of faith and the Holy Spirit, and Philip, Prochorus, Nicanor, Timon, Parmenas, and Nicolaus, a convert from Antioch. They had them stand before the apostles, who prayed and laid their hands on them.” —Acts 6:2–6

The racial divisions were considered to be so grievous and serious that for the first time in the whole book of Acts, the entire church stops and gathers together. In this text, there’s kind of this sense of, Look. The world is going to have its divisions. But not in God’s house. When the divisions of the world become the divisions of the church, we have to stop everything and address it. This cannot be. And so they stopped and gathered everyone together.

From Outreach Magazine  The Model Minority Myth and the Church

Historically, we’ve used this passage to tell the story of how we get deacons. While that may be the case, it’s not the point of the text—there is so much more going on in these verses. We see how the church not only stops to gather, but how they identify real solutions. They name seven Hellenistic (Greek, Gentile) men who have authority and responsibility to oversee restoration and justice in this issue. Their solution was specific and culturally sensitive, as it took authority away from those who were abusing it (the Hebraic Jews) and intentionally placed it with seven Hellenistic Jews who could best address the issue at hand. In other words, the members of the oppressed party (Gentiles) were given authority, rather than members of the oppressing party (Jews). And then, in the very next verses, we see that those real solutions led to real transformation:

“So the word of God spread, the disciples in Jerusalem increased greatly in number, and a large group of priests became obedient to the faith.” —Acts 6:7

Acts 6:7 is the second major benchmark in the book of Acts where a multitude of people come to know the Lord. (The first is in Acts 2:47.) But here we not only see a multitude come to faith, Luke also specifically mentions that a large group of priests became obedient to the faith. Why?

Are we willing to do the same? If God has given us the ministry of reconciliation (2 Cor. 5:19), then we must recognize that when our heart’s posture is divisive or when we stand idly by in the midst of division, we are in opposition to God’s mission. Racial divisions aren’t simply a social issue reserved for politicians or civic leaders to handle. This is a spiritual and moral problem.

From Outreach Magazine  Talking With Teens About Anxiety and Depression

One simple way we can get a glimpse into how racial divisions are manifesting in the church today is to look at polling percentages. Over 80% of Black Evangelicals voted for President Obama in 2008 while over 80% of White Evangelicals voted for President Trump in 2016. Those stats alone reveal how Christians today are more aligned with their racial perspectives than we are united in Christ.

During the 2015 ERLC Leadership Summit, Kevin Smith commented, “Our lack of unity and oneness is a direct contradiction of our missiological goal: disciples of all nations.” These divisions within the church are negatively impacting our mission. The divisions of the world have crept into the church. So the question is, does the church have real solutions for this division?

Praise God, the answer is a resounding yes! Or, at the least, a qualified yes—the church can have real solutions for this division. But we have to start by being willing to call any division caused by racism, discrimination or prejudice a spiritual and moral problem. We must be willing to call it sin.

Tell me more about this book »
Order this book from Amazon.com »
Read Outreach Magazine’s recent interview with Dhati Lewis »