Home Resources Books How Can We Bring Light to Immigration Dilemma? 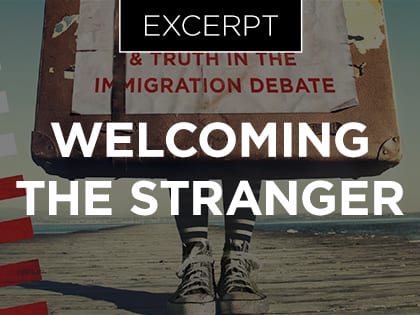 The immigration debate has become increasingly heated in recent years. How can we as Christians bring light to the discussion?

Excerpted from
Welcoming the Stranger
By Matthew Soerens and Jenny Yang

After the presidential campaign of 2016, in which immigration became a central issue, the debate over how to respond to immigrants in the country illegally seems more polarized than ever.

Since the first edition of Welcoming the Stranger, another category of “stranger” has become particularly controversial: refugees, who have long come to the United States at the invitation of our federal government with legal status, have joined immigrants without legal status as a uniquely suspect category of foreigner in the minds of many Americans. As with the debate over illegal immigration, the refugee debate seems frustratingly simple to those on either side: To some, it is foolhardy to admit anyone from nations plagued by terrorism into our country, lest we welcome terrorists themselves. To others, welcoming the persecuted and oppressed is an unqualified good, integral to our national character. The two sides have a hard time understanding the other, as evidenced by harsh words shared over social media and even over family dinners and church potlucks.

Less vocal in these immigration debates are the many who suspect that immigration is actually a complicated, nuanced issue. Partisans of a particular policy position are apt to view the issue as very simple—right versus wrong, us versus them.

Yet, as political scientist Amy Black notes, it is these “easy” issues that often prove the most complex and the hardest to resolve since our presumptions keep us from hearing the other side. Within this debate, a growing middle recognizes this is not a simple issue. They want a more thoughtful, informed understanding of the issues than offered by the two-minute screaming matches by advocates of differing perspectives on cable news channels and talk radio.

From Outreach Magazine  Advocating for Justice That Restores

Those of us who seek to follow Christ, in particular, face a challenge in sorting through the rhetoric to understand how we can reflect God’s justice as well as his love and compassion in designing a national immigration policy, and in the ways we relate individually to the immigrants in our communities. On first glance at the issue, we recognize that immigrants are people made in God’s image who should be treated with respect; at the same time, we believe God has instituted the government and the laws that it puts into place for a reason, and that as Christians we are generally bound to submit to the rule of law. Many are left conflicted, unsure of what our faith requires of us on this pressing issue.

Through the work of World Relief, the Christian ministry where we both work that serves refugees and other immigrants throughout the United States, we might find ourselves on a regular basis in a church, speaking with people about issues of immigration and citizenship, or in a congressperson’s office, talking with staffers about the need to fix the immigration system. Sometimes we speak in Spanish or with translation in Lithuanian, Arabic or Cantonese to an audience of immigrants eager to naturalize or fearful of what a newly announced immigration enforcement policy will mean for them and their families. Other times we are speaking in front of a predominantly nonimmigrant church group, answering questions about immigration policy. When we are in front of an audience of nonimmigrant evangelicals or before congressional staffers who are helping our political leaders form immigration policy, we find that many are asking the same questions we have often asked ourselves. This book seeks to address some of the most common questions and misconceptions that we and other Christians have wrestled with as we consider the immigration “problem.”

This book is written out of our own personal experiences with this dilemma, tracing through much of the investigation our own questions have led us to in seeking to understand immigration policy—and, more important, immigrants themselves—through the lens of our faith. While it would be disingenuous to pretend that we do not have strong opinions about how we (as individuals, as the church and as a society) should approach this issue, our foremost interest is not to convince you of the virtue of any particular piece of legislation. Rather, we hope this book will encourage our sisters and brothers to take a step back from the rhetoric and combine a basic understanding of how immigration works, and has worked in the United States, with a biblical worldview. We do not believe there is one Christian prescription to solve the immigration issue (though there may be decidedly un-Christian ways to view the issue), and there is plenty of space within the church for charitable disagreement on issues such as this.