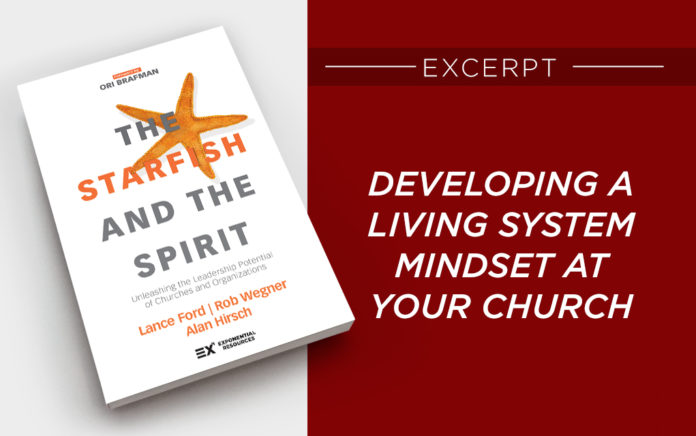 Excerpted from ‘The Starfish and the Spirit’ (Zondervan)

Excerpted From
The Starfish and the Spirit
By Lance Ford, Rob Wegner and Alan Hirsch

Every organization is a network of relationships. We either ignore or forget this fact to our own loss. The central nervous system is the people themselves. It has the capacity to receive outside and inside information, process it and act accordingly.

It is what makes a body work. When disconnections, such as a spinal cord injury, come about, the CNS loses its ability to function properly, and there is a risk of loss of movement or death. How the system is regulated, maintained and opened or closed determines the effectiveness of our systems. This is a matter of processes. The right practices draw from present relationships and deepen them as well. Margaret Wheatley writes:

“We’ve lost confidence in our great human capabilities, partly because mechanistic organizational processes have separated and divided us and made us fearful and distrusting of one another. We need processes to help us reweave connections, to discover shared interests, to listen to one another’s stories and dreams. We need processes that take advantage of our natural ability to network, to communicate when something is meaningful to us.”

While on staff at a large church led by the hierarchy of a senior and executive pastor, I (Lance) received a harsh phone call from the senior pastor after I had sent an email to the executive pastor taking issue with the Christmas weekend staff schedule. The schedule had been announced without any input from staff members.

It meant the entire staff would be working on both Christmas Eve and Christmas Day, which was unnecessary. I had offered an alternative solution and had an idea about how to make it happen. The senior pastor called me and asked if I had been “polling” other staff members. He warned me that if I had, it would be grounds for serious discipline.

Two individuals had made a unilateral decision, affecting every staff member, their immediate families and their extended families, without any input from a large team of creative and smart men and women.

In Ephesians 4:16, the apostle Paul wrote, “The whole body, joined and held together by every joint with which it is equipped, when each part is working properly, makes the body grow so that it builds itself up in love.” Where a trusting community culture exists, creativity and responsibility course through the life of the body. There is collective ownership of the vision by the community of saints when we operate under the Spirit’s design. One or a few higher-ups do not regulate, dominate or commandeer the accomplishment of the vision. Teams begin to form, and life explodes through the collective gifts and talents of the men and women God has called together.

Those who leave pyramid forms of leadership behind must develop new processes and practices to fill the void left by managers and bosses. Who decides the where, what, when, and how issues of strategic initiatives, schedules, programming, and production? How are conflicts resolved? How are salaries decided on? Since leadership is about power, a commitment away from hierarchal leadership means we must work to develop a new power grid for our organization. What might that look like?

A typical GM factory in the 1980s evoked every stereotype we have of an assembly line. Each worker was responsible for a single task, and the hierarchy was rigid and clear. The system was producing cars that were at best okay. If an employee made a mistake or detected a problem, he could stop the line, whereupon a loud alarm would sound. Get ready to be critiqued! You’re a problem.

The Toyota assembly line was drastically different. Employees were regarded as members of a team, and each team member was considered an important contributor and given a high level of autonomy. What happened if an employee stopped the line? A pleasant “ding-dong” would sound, and teams would carefully study what was going on in an effort to continually improve the process. Line workers were constantly encouraged to make suggestions.

Take a moment and imagine you’re the head of Toyota. How many worker suggestions would you implement? Assuming most suggestions are well meaning but wouldn’t work, 15 percent? Playing the odds that half the suggestions are likely to be helpful, 50 percent? Try 100 percent. Like Wikipedia edits—but thankfully more accurate— each suggestion made by a Toyota line worker was implemented. In decentralized fashion, teams functioned like a circle, and whatever ideas employees had for innovation were put into practice. And in Wikipedia fashion, if someone’s suggestion proved counterproductive, another employee would inevitably make a suggestion to undo the previous suggestion. This was an entirely different way of dealing with employees. Rather than regarding line workers as drones who had to follow directions and be kept in line, Toyota viewed its employees as key assets.

Imagine the line workers’ feeling of empowerment. Their opinions mattered. But Toyota didn’t stop there. It also flattened its management hierarchy and equalized the pay scale. Now everyone was in it together.

GM proposed, almost in a dare, that the Japanese take over management of its Fremont, California, auto plant, one of the company’s lowest- producing plants. They could run the plant as they saw fit, but they had to use the same union force.

The results were staggering. Within three years, it was one of GM’s most efficient plants. Their productivity was 60 percent higher than other comparable GM plants!

One hundred percent inclusion of input. A new power grid indeed! That’s a living system, even in a factory. With the implementation of a proper advice process, which we will discuss ahead, the wisdom of the team emerges apart from the weaknesses of consensus.

Read more from Rob Wegner, Lance Ford and Alan Hirsch on the concepts that animate The Starfish and the Spirit here.