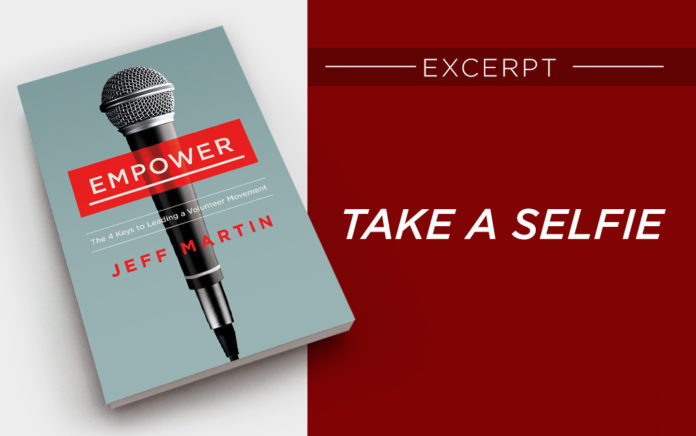 Excerpted From
Empower
By Jeff Martin

The principle of value is one that needs to be examined not only by organizations, but by individuals as well. There tends to be two types of people when it comes to value—those who overvalue themselves and those who undervalue themselves. In my experience, it is the second type that is most prevalent.

However, in a selfie world where many of the younger generation want to be social media “influencers,” the center of their world is indicated by the center of their phone camera, which is themselves. This can lead people down a dark path of believing they actually are the center of the world. For most of them, this belief didn’t happen in a vacuum. Their parents helped create the environments that allowed it to take root and flourish. An entire generation has been raised with parents who aggressively sought to destroy or disrupt anything that would cause physical, mental or spiritual discomfort or hardship. While their intentions were good, the results have been catastrophic. We now have a large part of this generation that believes they are something that they are not. They overvalue who they are.

Once the children reach adulthood and the parent protection bubble bursts, the reality of how the world sees them comes crashing down on them. There is no one hovering over them to remove obstacles anymore. In fact, there are obstacles and problems purposely placed in front of them for them to solve and overcome on their own. The word to describe this new challenge is actually an old term: work. Businesses and bosses are not interested in coddling an “influencer.” They value results, and results require hardworking people. This requires characteristics that can only be forged in the fire of trial and suffering. The first chapter of James in the Bible talks about how trials that test your faith produce perseverance that results in being mature and complete. That means the opposite is also true. No trials will result in no perseverance, no maturity and no completeness. What once was a problem of overvaluing oneself can quickly become a problem of undervaluing oneself.

I believe a majority of the population is either neutral about their value as an individual, or they undervalue what they have to offer.

Paul, the author of much of the New Testament, paid close attention to the importance of each person understanding and leaning into their value. He knew this principle was critical if the fledgling Christian movement was going to be able to spread and sustain momentum. If the early followers of Christ thought they had little to no value in helping spread the gospel of Jesus and had settled into spectator status, expecting gifted orators to do all the work, the movement would have been dead in the water. The Roman government would have simply rounded up the Christian celebrities and thrown them in prison or executed them. All the masses of ordinary spectators would have gone home and proceeded with their ordinary lives. The problem posed by the pesky Jesus movement would have been immediately solved.

Spectators never start or grow anything. They just spectate. As soon as the object of their spectating is removed, they fade into the crowd.

From Outreach Magazine  4 Positive Ways Churches Can Use TikTok

In fact, the Roman government actually did try to round up and eliminate the leaders of the Jesus movement, and it failed miserably. Instead, the gospel of Jesus burst out of the tiny, backwater province of Israel on the edge of the Roman Empire and swept across the entire known world with breathtaking speed.

The movement was not made up of spectators. Paul’s initial letters helped unite and encourage thousands of ordinary followers in his time and hundreds of millions since then to the very day you are reading this book.

You can literally feel the passion for value in the stroke of each word Paul wrote on that ancient parchment:

“For just as each of us has one body with many members, and these members do not all have the same function, so in Christ we, though many, form one body, and each member belongs to all the others. We have different gifts, according to the grace given to each of us.” —Romans 12:4–6

Just think if you were in the audience of those early followers listening to these words spoken directly to you. You would have literally felt them embedding themselves into your heart and taking root. You have immense value, and you are part of a body of people that is changing the world! No wonder this movement shook the Roman Empire and turned the world upside down.

From Outreach Magazine  What You Can Learn From Your Painful Emotions

Every part, regardless of function, is of equally extreme value to the body. That message contains the same accelerant today. This is amazing news for all of us who make up the ordinary parts of the body. We have inherent value not because of our form or function or abilities. It is because of the value placed on us by our creator who knit us together in our mother’s womb for a specific purpose on this earth for such a time as this.

Excerpted from Empower: The 4 Keys to Leading a Volunteer Movement by Jeff Martin. Copyright 2021. B&H Publishing. Used by permission.