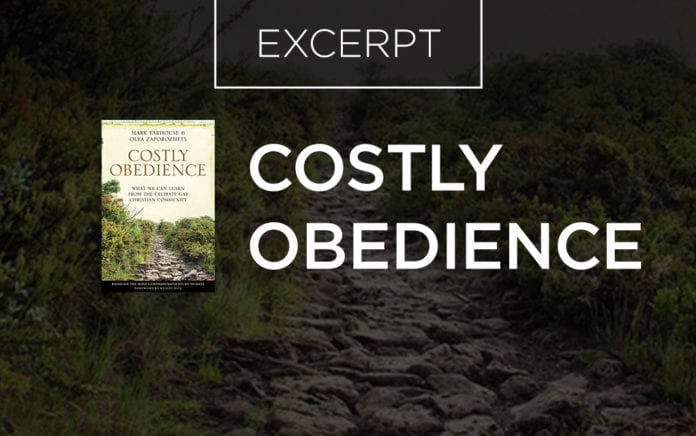 The church needs to be a place of support and familial love for singles—gay or straight, short-term or lifelong.

Excerpted From
Costly Obedience
By Mark Yarhouse and Olya Zaporozhets

Although the concerns of celibate gay Christians are not always identical to the concerns of other unmarried Christians in the church, those who remain single because of their sexual identity and sexual ethics are a subset of a larger group of single Christians in the church. Part of making the church safe for celibate gay Christians, then, is making the church safe for all its unmarried members. Kyle Keating, a Side B blogger, discusses the need to establish a healthy culture for single persons in his blog post What Makes a Church Safe?

“In order for the church to be perceived as a viable alternative community to the ones … gays and lesbians are already in, she must make space for singles—and not just temporary singles, but people who feel called to a life of celibacy. Indeed, creating space for singles and thinking about the role of singleness in the church is a prerequisite to offering a viable and desirable apologetic to gay and lesbian people. If we are going to call them to give up relationships of deep intimacy, then we must be prepared to offer them a community of deep intimacy. Is our singles community simply a place where we try and solve the problem of singleness? Are we prepared to provide community for a 45-year-old single man or woman? A safe church thinks through these questions and considers how they might encourage deep friendships among congregants across all sorts of family lines. Everyone is longing for the deep connection of friendship (even married folks) and friendship must play a key role in making a space for singles in the church.”

There are differences, of course, between being single and gay and being single and straight, but the culture for single Christians will impact the experiences of celibate gay Christians, and some of our interviewees commented on that. For example, Lucas related how a high view of singleness might be accompanied by a more accurate view of marriage:

“Whether the church has a healthy space for single Christians is an important question—trying to get away from sort of baptizing Hollywood romance and look more seriously at what the Bible says about marriage and celibacy. Also, I think [the church needs] a more realistic picture of marriage—so that it’s not a romanticized picture of marriage. I think if there were more attention to both the positive elements and the challenges, then it would be easier to deal with the positives and challenges of celibacy.”

Charles reflected on the challenges that arise when the church defends marriage and denigrates singleness in the process:

From Outreach Magazine  How God's Love Brings Us Together

“I think that the church has a problem, in that the church senses that the so-called ‘institution of marriage’ is under attack, or certainly less valued in our culture, or people are less interested in marriage. They rush to try to defend marriage, and there is nothing wrong with that, but in so doing, they erase the other story [that honors singleness]. You know, by their general strategy of defending marriage, by saying it is the best thing and the awesomest thing ever, but you know the church has a lot of people besides just the homosexually attracted people who will never get married.”

Part of honoring singleness within the church means recognizing that the nuclear biological family should not be the only—or even the primary—source of familial belonging in Christian communities. Interviewee Charles gave his thoughts on spiritual families:

“When I read the Bible, what I constantly see is the Lord, or Jesus, affirming spiritual families of the church above the nuclear family. Like, he showed that your true home, your true family, your true brothers and sisters are the church and not your nuclear family. … I think that the American church, [in its efforts] to ‘focus on the family’ or ‘protect the family,’ has really alienated a lot of people, and embitter[ed] people. … You’re burdening them with unrealistic expectations, while not lifting a finger to help them carry the burden, as Jesus says to the Pharisees.”

Ben advised the church “to focus less on the nuclear family and focus more broadly on what it means to be community with the broader church family, so that singles are not … only relegated to their kind of singles ministry or [left] to fend for themselves.” Instead, Ben proposed, singles need to be organically incorporated into the lives of others in the church; he longed “to see a lot of married couples and married families see singles not as, Oh, we should invite them over for dinner, but like, What if we went on vacation with them?” Ben felt that there was a deep need “for same-sex-attracted people within the church to have those families [where they are welcomed as full participants] as opposed to being left to fend out there on their own.”

Eugene shared the following suggestions for the church:

“I hopefully will have really close friends, Christian brothers and sisters for sure. But someday I want to find my niche, who will be supportive of me, whether they’re married or whatever, but hopefully having an established group of friends will mean I can just sit back, put my head on their shoulder, and just be comfortable. That’s what I really want.”

Another piece of advice celibate gay Christians had for churches was that if they choose to confront same-sex sexual sin, they should be consistent in equally confronting other forms of sexual sin. Charles discussed the importance of consistency:

“The real danger is when people sense the church has a double standard—that in one sin area, the church is demanding obedience in cleaning up behaviors before they can participate in church life, whereas in other scenarios, the church is willing to overlook them. You know, the church that I went to in South Carolina, [the leadership] did actually challenge people about homosexual practice, … but it only worked because everyone in the church knew that they also took heterosexual sex very seriously. They took greed very seriously. They took every sin issue equally as seriously. In fact, they were probably more willing to confront people about their heterosexual sin rather than their homosexual sin, just because of the social dynamic. And so that was, I think, really amazing, which wasn’t the double standard, and people really need to believe that [same-sex sexual sin] is not any different from any other brokenness that humans experience.”