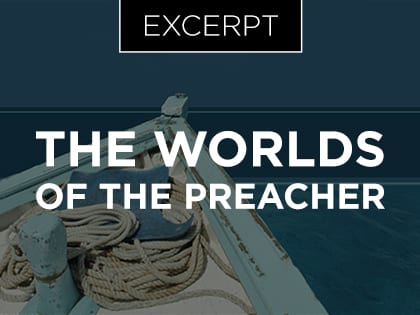 For busy pastors everywhere: Here are some great ways to get a quick but effective understanding of issues of culture and ethnicity.

Excerpted from
The Worlds of the Preacher
By Scott Gibson

Preachers have limited time during their busy weekly schedules. How can a preacher exegete ethnicity and culture with the numerous demands of pastoral life? I would like to suggest some practical steps, given today’s time constraints, that will begin to improve one’s sermonic reach.

To begin, we might read existing literature on the topic. In Counseling American Minorities: A Cross-Cultural Perspective (McGraw Hill), the authors take the reader on a comprehensive journey to explore the worlds of different racial/ethnic minorities—such as African Americans, Native Americans, Asian Americans and Hispanic Americans—for the purpose of being able to counsel individuals from these varied backgrounds. Although the book is targeting issues in counseling and not preaching per se, the reader can still enter the world of individuals from these varied cultures in order to better understand how they think and process experiences. Other helpful works related to race, ethnicity, culture, ministry and homiletics include: Being White: Finding Our Place in a Multiethnic World by Paula Harris and Doug Schaupp (InterVarsity); Preaching to Every Pew: Cross-Cultural Strategies by James R. Nieman and Thomas G. Rogers (Fortress); Multicultural Ministry by David A. Anderson (Zondervan); Preaching and Culture in Latino Congregations, edited by Kenneth G. Davis and Jorge L. Presmanes (Liturgy Training); One Gospel, Many Ears by Joseph R. Jeter Jr. and Ronald J. Allen (Chalice); I Believe I’ll Testify: Reflections on African American Preaching by Cleophus J. LaRue (Westminster John Knox); and Preaching the Presence of God: A Homiletic from an Asian American Perspective by Eunjoo Mary Kim (Judson). I hope my book Preaching with Cultural Intelligence: Understanding the People Who Hear Our Sermons (Baker Academic) will be a welcome addition to the mix.

As preachers, we are committed to regular study, and this commitment extends to learning about different races, ethnicities and cultures as well.

A second intentional way to learn about different ethnicities and cultures in the congregation is through conducting focus groups. Companies use focus groups regularly as a strategy to discern how best to market their brand and product. Taking a cross section of non-majority individuals from the congregation, the preacher can ascertain how effectively or ineffectively the Sunday sermon is meeting the needs of minority listeners. In most contexts, the preacher will use focus groups to begin exploratory research. Norman Blaikie explains that “exploratory research is necessary when very little is known about the topic being investigated, or about the context in which the research is being conducted.” The preacher could initiate a conversation with members of the congregation who represent different ethnic groups. Similar to the concept of roundtable preaching, advocated by John McClure and Lucy Atkinson Rose, the preacher invites dialogue by asking these congregants the following types of questions:

Rather than being fearful of how such questions and focus group conversations may be perceived by minority members, know that most non-majority culture parishioners will welcome and appreciate such direct pastoral and homiletical care. Focus groups could become a regular and ongoing part of a preacher’s cultural exegesis. Through intentional dialogue, the preacher will gain sermonic insight that may be used intermittently (and wisely) to demonstrate his or her endearment and concern for all members of the flock.

From Outreach Magazine  Half the Church

Another helpful practice in learning about a specific ethnic group is to establish friendships and engage in informal conversations. As one befriends a person of a different ethnicity and culture, one learns over the course of time that culture differs as well as overlaps. This knowledge shows the homiletician or preacher that we cannot customarily preach a “one-size-fits-all” type of sermon.

The Gospel writers record numerous examples of Jesus befriending others in his life and ministry. He took an active interest in those who were different from himself, those who were considered outcasts in society. Although he could not identify with them on every level (e.g., sin), his many conversations gave him insight into how to meet their individual and collective needs.

A preacher’s sole purpose in establishing friendships of this sort should not be to learn about a particular ethnic group only for sermon preparation, and it certainly shouldn’t result in people feeling like they have become the pastor’s project. However, through genuine shepherd-like care, we can extend our influence both pastorally and sermonically by becoming knowledgeable and sensitive to the God-given differences of others.

As mentioned earlier in this chapter, we may have heard sermons where preachers conclude that the creation of different cultures was God’s curse on humanity. Citing Genesis 11 as a primary example, some preachers insist that the Tower of Babel moment was God’s pronounced judgment on his people for their sin of self-glorification and that the aftermath resulted in the creation of different languages and ultimately different ethnicities and cultures. If, as Scripture states, humans are created in the imago Dei, is it still plausible that races, ethnicities and cultures reflect God’s curse on certain ethnic groups? Moreover, which ethnicities and cultures constitute God’s choice people, and which ethnicities and cultures are cursed? Instead, the judgment of God was directed at the dispersal of his people who felt the need to bring glory to themselves. As Carl F. Keil explains, “When it is stated, first of all, that God resolved to destroy the unity of lips and words by a confusion of the lips, and then that he scattered the men abroad, this act of divine judgment cannot be understood in any other way, than that God deprived them of the ability to comprehend one another, and thus effected their dispersion.”

As preachers, we can embrace and celebrate the beauty of God’s creation in all ethnicities and cultures. Celebration comes in many forms. One way to celebrate ethnicity is to affirm minority ethnicities within the congregation. Typically, preachers subconsciously paint a picture of only the majority culture as being heroes, heroines, and protagonists. On other occasions, the historic sins, failures, or demise of a particular minority group will be named by the preacher. The unintended consequence of such preaching patterns is that we can demonize minorities and minority groups. Rather, in our illustrations, we can show both groups—majority and minority members—that we indeed value and celebrate minority ethnicities and cultures by offering favorable images of them.

Second, as Nieman and Rogers suggest, celebration of ethnicity may also take the shape of using ethnic words from specific languages that more effectively explain what we are trying to convey. Sometimes we will find that words in other languages like Spanish, Chinese, or German are better suited for the context or situation about which we are speaking. Such words illuminate and illustrate the meaning more poignantly than English words.

Third, celebration of ethnicity could also involve demonstrating to our listeners that we have thought about how the sermon’s application might have an impact on one’s ethnic group. For example, in Luke 14:26, Jesus tells his disciples: “If anyone comes to me and does not hate father and mother, wife and children, brothers and sisters—yes, even their own life—such a person cannot be my disciple.” The application of Jesus’s point looks different depending on whether one comes from an individualistic culture or a more collectivistic culture. Individualistic cultures apply God’s Word to individual persons. We turn group instructions in the Bible into personalized instructions for the individual believer. We take what is a “you” plural and repackage it into a “you” singular. In contrast, listeners in collectivistic cultures, such as Asian Americans or Hispanic Americans, where the family unit is more important than the individual, may have more resistance to individualization and want to know how God’s Word speaks to the entire community and family, not just the individual. By acknowledging this cultural difference in our sermon, we show listeners from collectivistic backgrounds how to apply this biblical concept in a more contextualized fashion.

Lastly, preaching on ethnicity and culture requires ongoing conversations and active work in reconciliation. In their book Reconciling All Things, Emmanuel Katongole and Chris Rice observe, “We live together in a broken world, and we do not have to live long to learn that we need healing. We need reconciliation.” The work of reconciliation requires mutual repentance and forgiveness between the offender and the offended. The question we must ask ourselves as preachers is: “When have I [my ethnic group] been the offender and when have I [my ethnic group] been offended?”

The reverberations of the ministry of reconciliation in 2 Corinthians 5:11–21 clearly extend into the domain of ethnic and cultural reconciliation. Remember the ethnic and cultural divisions of the early church between Jews and gentiles? As indicated in Acts 6, human nature is that ethnic groups are self-interested and self-caring. Nobody needed to tell the Jews to care for their own and thereby neglect the Hellenists. The Jews did that instinctively. If we’re honest, we do the same today for our own ethnic group even in the same congregation. We feed our own and the rest fend for themselves. We preach to our own and the rest are often forgotten. Preaching in the world of ethnicity and culture invites us to cross cultures. It demands that we repent and seek forgiveness from the offended. How have we perpetuated ethnic divides by our silence? Preaching that embraces and celebrates ethnicity and culture will foster opportunities to break down “the dividing wall of hostility” (Eph. 2:14). When my ethnic group has sinned against another, I must have the humility to ask for forgiveness and repent for my complicity even if I personally did not directly offend the other. It is another form of Paul’s proclamation that “I have been crucified with Christ and I no longer live, but Christ lives in me” (Gal. 2:20).

Excerpted from The Worlds of the Preacher Edited by Scott Gibson. Baker Academic, a division of Baker Publishing Group, 2018. Used by permission. BakerPublishingGroup.com