Home Resources Books The Tug-of-War Between Love and Truth 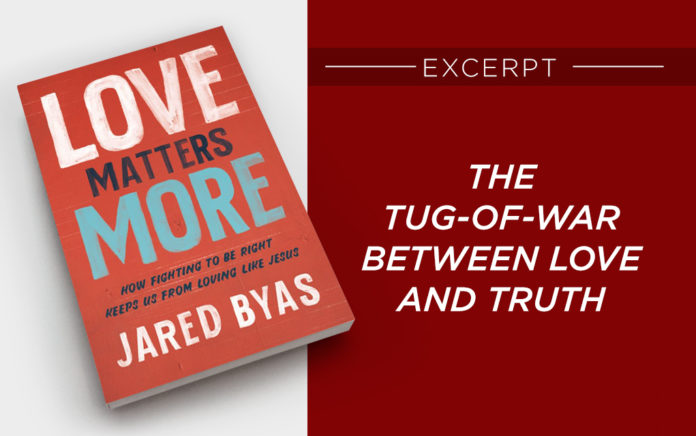 “Speaking the truth in love” is not about telling people where they are messing up. It’s about demonstrating truth by your love and loving people by walking in the truth.

His problem is that his daughter is sleeping with her boyfriend, and he feels this is a sin. His wife has told him that if he makes too much of it, he will lose his relationship with his daughter, but he feels compelled to let his daughter know his conviction.

To summarize, he is wrestling with this tug-of-war between truth and love.

He came to me with tears in his eyes and asked my opinion about what he should do. My response: “Love without judgment.”

I asked him why he felt the need to make sure his daughter knew what he approved of or didn’t approve of in her life. She hadn’t asked for his opinion. And more importantly, given the fact that she grew up in his house, I told him I was sure she already knew his opinion and what he valued. She knew his opinion about her choice, but she wasn’t sure whether her dad would love and accept her unconditionally, even if she made a choice he didn’t approve of. His opinion about her decision wasn’t in question; his ability to love her even if she made a decision that went against his opinion was.

He sighed in relief as tears welled up. He knew this all along. He just needed someone to let him off the hook.

From Outreach Magazine  Where Are We Finding Our Identity?

At root is the fear that if we don’t tell people they are wrong, and if they don’t feel the discomfort of our judgment, they’ll have no incentive to change. But that’s not how change works—not in the Bible, not in psychology, not in real life.

It’s amazing to me that we’re still convinced that telling people they are wrong is the way to bring about real change in the world, despite it almost never working.

I have seen hundreds of lives changed by human beings who have shown up to love without judgment, without feeling compelled to “speak the truth in love.”

I have seen almost no lives change when we begin by “speaking the truth in love.”

One of my all-time favorite songs is called “Roll Away Your Stone” by the band Mumford and Sons. One stanza perfectly illustrates what I mean. It’s basically a brief retelling of the lost son parable told by Jesus. The stanza’s last two lines go like this: “It’s not the long walk home that will change this heart, but the welcome I receive with every start.”

Somehow in American Christianity, we have become convinced that it is, in fact, “the long walk home” that will change people’s hearts. But it’s not. It’s the welcome that people receive with the love required to give someone another start.

Influential psychologist Carl Rogers said it succinctly: “The curious paradox is that when I accept myself as I am, then I change.” This is often called the acceptance paradox or the change paradox in psychology.

When we try to “speak the truth in love,” we short-circuit the process and ask people to change without first accepting themselves for who they are. We get it all backward.

I believe the Bible tells us that the highest form of truth is wisdom, and the highest form of wisdom is love. So my highest commitment is to transformation through love and not through knowledge of facts. The great lie we’ve been sold in the modern era is that the only way to truth and transformation is through fact-finding and making sure that people know we know our facts.