Home Resources Books Identifying Distractions on the Path to Mastery 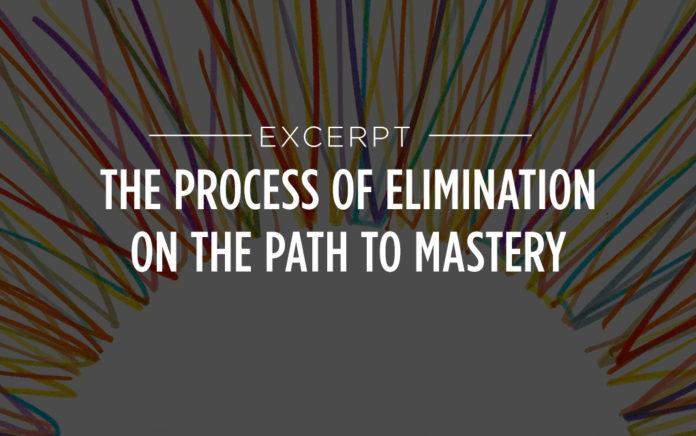 How to eliminate nonessentials from your life.

Excerpted From
Master of One
by Jordan Raynor

While getting in the habit of saying no to the nonessentials takes discipline and hard work, the process isn’t rocket science. In fact it’s quite simple. Here’s an example of how I have seen the process of elimination play out in my own life.

SAY YES TO THE ESSENTIAL

Following the example of Jesus, before you can decide what to eliminate from your life you need to be crystal clear on what is essential. Professionally, this is the one thing you have chosen to master in this season of life. A few years back I was running a thriving consulting business helping entrepreneurs grow their businesses. One of my most promising clients was Threshold 360, whose founders were on an audacious mission to allow anyone to virtually step inside any location on earth. A year into my consulting engagement with the company, the founders asked if I would consider taking over the reins as the startup’s second CEO. While the move required a ton of sacrifice and risk, I couldn’t pass up the opportunity. I was (and continue to be) ecstatic about the mission of Threshold. I also knew I wasn’t going to make my greatest contribution to the business as a part-time consultant. I needed to put all my eggs in that basket. So I did. I gave an emphatic yes to applying my one thing (entrepreneurship) to just two projects: bringing Threshold 360 to market and launching the book I had just finished writing (Called to Create).

But my work wasn’t the only thing I was choosing to deem essential in my life. As I explored earlier in Chapter 1 of Master of One, we Christians are called to excellence in everything we commit ourselves to. So while I had chosen to sink my teeth into Threshold 60 hours a week, I also had a few things other than work that I was committed to pursuing with excellence: my marriage, raising my kids, a handful of friendships, and being an active participant in the life of my home church. The list of things I was saying yes to at this stage of my life was quite short, but each item takes an extraordinary amount of time and energy to pursue with excellence. This unavoidable truth caused me to make a much longer list of things I was intentionally saying no to in order to focus on what was truly essential.

SAY NO TO THE NONESSENTIAL

Once you’ve chosen your one vocational thing and identified what’s essential outside of your work, it is critical that you get good at saying no to the nonessential in order to pursue excellence at the things that really matter to you. When I decided to commit to the role of CEO at Threshold, I had to say no to a lucrative consulting practice and the clients I loved. I also chose to eliminate many activities that took me away from my wife and kids at night, knowing that, in my new role, I was going to be traveling much more than before. This meant saying no to some really good things, including serving on the boards of a few organizations, playing piano at my church on Wednesday nights, and even a couple of Bible studies. But the biggest sacrifices by far were made by my wife, Kara.

My wife is brilliant. And that’s not just a proud husband talking. I’ve got data to prove it. After graduating with a crazy-high GPA from Florida State University, Kara earned her master’s in accounting and sat for the Unified Certified Public Accountant (CPA) Examination, widely regarded as one of the most difficult professional exams. It’s so difficult, in fact, that fewer than 10% of exam takers pass all four parts of the test in their first sitting. Kara is one of the 10%.

After receiving her CPA license, Kara started a stellar career in finance, climbing the corporate ladders at Ernst & Young and Raymond James Financial. But when we decided that I would take the leap and join Threshold full-time, Kara made the choice to walk away from her career, at least temporarily. We both knew what my new role demanded: much more stress, much less flexibility and significantly more time on the road. Given our commitment to being exceptional parents, there was simply no way I could be an excellent CEO of the venture if Kara were pursuing mastery of her financial services career at the same time. Something had to give. And Kara graciously and sacrificially chose to put her career on hold so that I could focus on pursuing mastery in mine. We’ve seen plenty of people excel as mothers and fathers while also pursuing mastery at their respective vocations. But we knew our personal limits and agreed we couldn’t both be chasing our ambitious professional dreams and give our kids the attention they needed. Even though the sacrifice was huge, Kara chose to put her career on hold to focus on her role as a mother—the one thing she felt she was called to pursue with mastery at that stage in her life.

BEWARE OF SIDE PATHS

Kara and I live in a coffee desert. The closest Starbucks is five miles away, and the closest local coffee shop is even farther. Every few months I get the urge to invest in opening a café near our house. Without fail Kara graciously listens to my ridiculous quarterly pitch: “Babe, this is a no-brainer opportunity. It will be easy. We can even get so-and-so to run it. It’s not that big of a lift. We won’t have to lift a finger after six months!” After my entrepreneurial rant is over, Kara just stares at me. She knows better, and she knows I know better. No entrepreneurial activity is ever “small,” even if you aren’t managing the operation day-to-day. Our “coffee shop conversation” always ends the same way, with Kara reminding me that while this would be a fun project that is in line with the one thing I have chosen to master (entrepreneurship), in this particular season of life, there is simply no way either of us can take on another major project and do it exceptionally well.

Here’s my point. The process of elimination is not just something you do one time. As you continue down the path to mastery, there will be many side paths vying for your attention, attempting to distract you from the work the Father has given you to do. In these moments it is important to remind yourself of what is essential and have someone alongside you to keep you focused on the path to mastery. For me, that’s usually Kara or my closest friends.

Excerpted from Master of One: Find and Focus on the Work You Were Created to Do. Copyright © 2020 by Jordan Raynor. Published by WaterBrook, an imprint of Penguin Random House LLC.