Home Resources Books Beholding Others at the Table 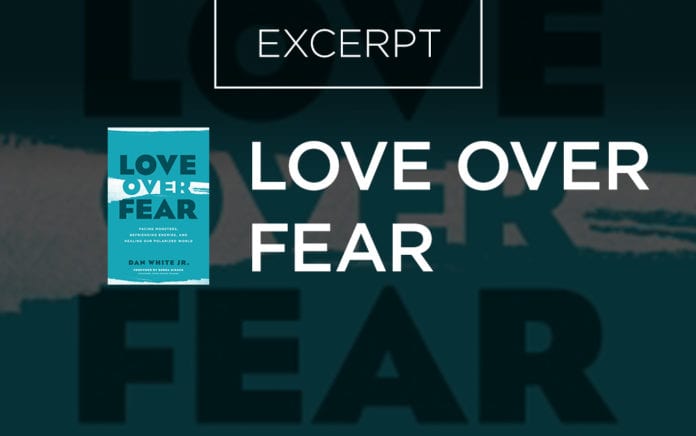 Why I invited people with grievances against me to the dinner table.

Excerpted From
Love Over Fear
By Dan White Jr.

I decided to reach out to “frenemies” in our neighborhood who had picked up some offenses toward me, discovering them through the detached medium of Facebook. Now, it should be said that to physically be with our enemies is not always appropriate. If you have been physically abused or put in danger by someone, it is wise to establish a boundary until they repent. These types of choices are best discerned with trusted community. I was not in danger when I pursued my neighbors—certainly in stress, but not danger. I rattled in my skin as I invited them over for a meal. Too often we see people not as a person but as a thing. Not a potential friend but as an issue, especially if there is existing antagonism between you and the other. Who wants to eat with someone who you perceive as being fundamentally against you?

As they arrived, the meal was not ready, so I asked if they wanted to help. Suddenly we are bumping into each other, cooking togethe and sharing in the mess of flour, pasta and onion peels. I sought to expand the “Us,” slowing down our urge to establish who is right and who is wrong. We must learn to be with our enemies, rather than being over them. As we sat down to eat together, things began to feel tenser. So, I asked them a question of compassionate curiosity: “How have I hurt you?”

C. S. Lewis, in his book The Weight of Glory, stated that next to the bread and wine, our neighbor, our enemy, is the holiest object in the world. Despite how many nasty labels have been thrown around, seeing the image of God present in my polarized neighbor was the first step. Christ did more than see; he would “behold” others, and drink in with his eyes—taking in the profundity of the person before him. So much depends upon our ability to see monsters differently, as people God loves. Maybe it’s conservatives, or progressives, or a neighbor, or a church member who incessantly says horrible things, who acts unjustly toward others, and plagues us whenever we see them. I know, just the sight of them causes the blood to boil.

From Outreach Magazine  Leave a Footprint

We are each an ark, a temple of the presence of God (1 Cor. 6:19–20). Jesus is inviting us to have eyes to see. Our eyes are often looking for the presence of God in the most obvious places; in a sermon, in a worship set, in a Bible study. Or as with the prophet Elijah, in the earthquake, in the fire, but we miss him in the gentle whisper (1 Kings 19:12). Spend less time looking for compatibility and more time beholding—looking for story, for pain, for human fragility. Look past the irritants, the differences, the bothersome attributes to see the representation of God.

As this question—“How have I hurt you?”—stumbled off my tongue, I wanted to gobble it back up as if it never came out. I felt it; I was giving away the power that my ego wanted to clench tight-fisted. The more they talked, the more we discovered that we disagreed in some fundamental ways, but I was able to behold their pain. To freeze that moment in my mind, I see the anger and anguish in their face. This was more important to me than proving I was right in my actions. We repaired the breach between us, discovering how much more we had in common than we had in conflict. Cross the boundaries of “Us vs. Them”—try it.

Christians do not need to seek control in order to make things come out right. Instead, we are invited to identify the kingdom of God in the midst of our cracked earthen encounters.

When I am beholding others at the table, I need a theology of God’s active renewal. I’ve sat across the table from people as they’ve shared the atrocities as well as the complete dysfunctions of their life. It’s easy to wander into hopelessness when our eyes are fixed on the horror of human brokenness. I need to know that God is near and has not abandoned us. Is God here? That question comes up for me often.

I’m drawn to moments that beguile and stir, inspire and awaken, where, for a few blissful moments, I know something special, even sacred, is happening. Where my soul gets a glimpse of what my life is all about—perhaps of what life itself is all about. It turns out this has a name: thin places. No, these are not spots to describe where skinny people hang out on the beach. Celtic Christians were deeply connected to the natural world and considered every aspect of life, especially the ordinariness of everyday life, to be infused with the presence of God. They used the term “thin place” to describe this metaphysical moment in time where heaven and earth would touch, a thinner place between the sacred and the secular.

Some use “thin place” to explain physical locations in the world like the wind-swept isle of Iona or the peaks of the Rocky Mountains. Those are both beautiful, but perhaps God is breaking into the “thin place” between people, between enemies. We linger in a time when: wholeness and loss, healing and brokenness, liberation and injustice, life and death coexist in dynamic tension with one another. Amid dwelling with our enemies, God’s kingdom is present in the paradox. If we see with polarized eyes, we can see only through the lens of good and evil. But the “thin place” is in the blur between the two; this is where we must bear witness to the kingdom. Jesus did this often at the table, even with those who did not fully understand who he was. Long, drawn-out monologues or long lectures were not Jesus’ style when presented with difficult subjects. He did not shame; instead, he told interesting stories to illustrate the nature of the in-breaking kingdom. Sometimes at the table, like Christ, we need to paint a picture of the better world, a world where God’s kingdom is breaking in.