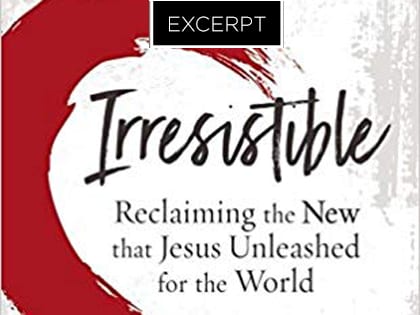 The ‘way of love’ may seem romantic, at first, but what were the implications when Paul referenced Christ’s sacrifice?

Excerpted From
Irresistible
By Andy Stanley

Here’s one of Paul’s more famous lists of imperatives. These were directed to Christians living in the port city of Ephesus.

“Get rid of all bitterness, rage and anger, brawling and slander, along with every form of malice. Be kind and compassionate to one another, forgiving each other …”

Why should we dispense with bitterness, rage and anger? Why should we be kind to the unkind and compassionate to the undeserving? Why forgive? Forgiveness is a gift to the guilty. Paul, who are you to set such lofty behavioral standards for the rest of us? Besides, we know your story. You’ve got no moral authority!

Anticipating our question, he completes his statement by citing his source:

“… just as in Christ God forgave you.”

That should sound familiar. According to Paul, we are to do for others what God through Christ has done for us. Everything in Paul’s short list is simply an application of “do unto others as Christ has already done unto you.” He continues:

“Follow God’s example, therefore, as dearly loved children and walk in the way of love …”

“The way of love.” Sounds romantic. But there’s another “just as” around the bend.

“… and walk in the way of love just as Christ loved us and gave himself up for us as a fragrant offering and sacrifice to God.”

According to Paul, Christian behavior is to be patterned after Christ’s sacrificial love for humankind. A way of life that Paul brands the way of love. It sounds a bit mushy until we consider the way of love culminated in a man hanging from a cross covered in his own sweat, blood and feces. We don’t like to think about that last part. After all, we’re talking about Jesus. But there’s nothing to gain, and perhaps much to lose, when we lay a filter over the gruesome nature of Jesus’ death. If nothing else, embracing the full scope of crucifixion removes any modern misconceptions regarding the way of love. There is certainly nothing soft or mushy about it. Paul, who had seen his share of crucifixions, would be quick to remind us that the way of love, while simpler than the way of Moses, was far more demanding. He continues:

“But among you there must not be even a hint of sexual immorality, or of any kind of impurity, or of greed, because …”

“… because these are improper for God’s holy people.”

Not surprisingly, Paul doesn’t leverage the old covenant to establish the standard for Christian morality. He leverages the believer’s inclusion in Jesus’ new covenant. These Ephesian Gentiles were now considered “holy people” or “saints” based on their inclusion in the new covenant. In light of who they were by the gift of God’s grace, Paul instructs them to walk in a manner worthy of their place. Everything that follows is simply more application of what it looks like to live as one forgiven by and, therefore, devoted to Christ. He closes and punctuates this section with this:

“For you were once darkness, but now you are light in the Lord. Live as children of light.”

Tell me more about this book »
Read our interview with Andy Stanley »
Pre-order Irresistible here »
Listen to a sample of chapter 1 below (narrated by Andy Stanley):