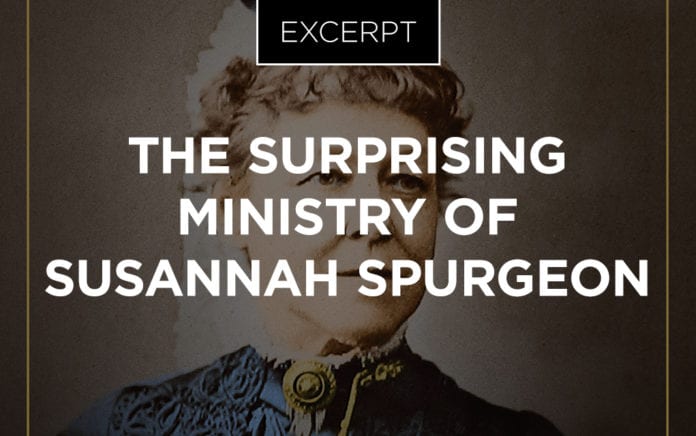 Susannah Spurgeon left a remarkable legacy in her own right, even as she supported her husband’s ministry.

Excerpted From
Susie: The Life and Legacy of Susannah Spurgeon, Wife of Charles H. Spurgeon
By Ray Rhodes

Susie Spurgeon finished writing the note—she had penned hundreds like it over the years—and placed it carefully inside the cover of the book The Gospel of the Kingdom. Her late husband, Charles Haddon Spurgeon, the English Baptist pastor renowned as the “Prince of Preachers,” had written the book. She wrapped the parcel and handed it to her longtime friend and assistant Elizabeth Thorne to mail. Like the many parcels sent before, the note and book would eventually find their way to a pastor as part of Mrs. Spurgeon’s Book Fund. This particular pastor, now living in a foreign land, had once sat in a classroom at the Pastors’ College and listened intently as college founder Charles Spurgeon lectured. The book, a commentary on the gospel of Matthew, was Spurgeon’s final work, which Susie described as “The last sweet, loving labor for the Master’s glory of the heart and hand now cold in death.”

Sometime later, the same pastor would reply in a note to Susie: “The last work of that wonderful brain and those busy hands, I value more than words can express; and I have pasted your letter within the cover.” Another pastor once wrote, “God bless you very, very much, and your work for his ministers, and cheer your heart whenever the desolation of loneliness comes over you, as you see the vacant chair, and the many things in the house that speak of your loved one. Take courage!”

Following the death of her husband on January 31, 1892, and still mourning her deep loss, Susie had wondered what the Lord would do with her, a frail and lonely widow. Would she continue her seventeen-year book ministry to poor pastors? She decided, yes: “God constrained me to the service, and strengthened me for it, in order to keep heart and mind from dwelling too constantly upon my loneliness and grief.”

Charles had encouraged her to embark upon the book ministry, which Susie described as “an angel of light, to point out to me the consoling power of active service for the Lord and His poor servants.”

As the books her husband authored passed through her hands, they stirred memories in Susie’s mind. She remembered the early days of their marriage when she and Charles had journeyed across the continent. A smile came to her face as she reflected on rowing in a gondola with her beloved along the Grand Canal through Venice. Romance had filled their hearts in the city that she described as “dreamy.” Even ordinary days held joy. Charles tenderly addressed her as “my darling” and “my precious love.” Sometimes they laughed so hard that they cried. But now, Susie wiped tears from her eyes. She missed her husband.

They had delighted in each other, despite their many trials. Susie recalled feeling the first signs of her declining health, as sharp pains pierced her body. She had eventually undergone surgery that left her mostly confined to home, and she had wondered if she would ever be useful again to either her husband or her Savior. Years of sickness followed.

From Outreach Magazine  Pastors: How to Silence Your Inner Critic

From then on, Susie’s health prevented her from accompanying her husband on his travels. When Charles left home for another trip to southern France, he would look longingly into her eyes, saddened she couldn’t go with him. She knew it had been hard for Charles, who was also sickly, to leave her behind as he traveled a thousand miles from home.

In the midst of her pain, Susie often comforted Charles as he suffered through his own afflictions of depression, gout and kidney disease. At times she found him weeping though he didn’t know why, his depressions could be so dark. Susie comforted Charles by reading the poetry of George Herbert to him.

Soon Susie’s chance to actively serve others arrived the day Charles handed her the first volume of his newest book, Lectures to My Students. She was so delighted with his masterful work that she wished every pastor in England could have a copy, free of charge.

Charles looked at his wife and said, “Well, Susie, will you make it happen?” Surprised by her husband’s challenge, Susie retreated to an upstairs room, paused to catch her breath and then retrieved a small stash of money that she had stored away in a drawer. “Perhaps the Lord will use this small offering to provide a few books to pastors,” she thought. She never dreamt, however, that this experience would lead her to invest the remainder of her days in service to pastors and their families.

Surrounding her as she worked were twelve thousand of her husband’s books, of which over half were either written by or about the Puritans that he loved so much. Spurgeon’s books, Susie’s “most precious possessions,” still sprawled through three rooms: the study, the adjoining library and another smaller room nearby. Susie pushed back from the desk and remembered her husband’s many encouragements to her. She could not—she would not—quit her ministry, regardless of her loneliness and poor health. She missed Charles terribly, but just as God had enabled her to serve him through physical affliction, he would also help her serve him as a widow.

Susie administered a book fund and an aid ministry that supplied books, money, clothes and other supplies to needy pastors. She was a prolific author of five books and a major contributor to other publications (including the massive four-volume C. H. Spurgeon’s Autobiography). Biographer Richard Ellsworth Day, in his popular book about Charles Spurgeon, imagined that if Susie had not chosen to sink her individuality into Charles and his ministry, “she could have mounted the levels of Elizabeth Barrett Browning” in her own writing. In addition, Susie supported the Metropolitan Tabernacle, opened her home as a place of hospitality, served as the “mother” of the Pastors’ College, and was even instrumental in planting a church.

From Outreach Magazine  Try This: 6 Ways to Minister to the Unemployed

Though her hopes, dreams and service were joined to Charles during his life and ministry, Susie also had a life filled with joys, sorrows, hopes and dreams for twenty-two years prior to meeting the great preacher and for almost twelve years after his death. It was God’s provision of her parents, family, Christian leaders, friends and experiences that helped mold Susie into a godly and persevering woman who became so beloved to her husband and so useful to the kingdom of God. And it was the grace of God that sustained her in the years following Charles’s death.

Ten years later, on a crisp October day in 1903, Susie, who died at seventy-one, lay in a lily-draped casket, carefully positioned in the middle of the library just outside Charles’ study where she had so often sat at his desk writing encouraging words to pastors and reflecting on God’s hand in her life.

Recalling that her name, Susannah, means “lily,” her son Charles penned a memorial to his beloved mother intimating that her “Christian character partook of the nature and beauty of this sweet plant.” His beautiful mother, with her brown eyes and her long chestnut hair, had lived an equally beautiful life. She loved her husband. She loved Jesus. And she had served God faithfully.

Though it is impossible to consider Susie in isolation from Charles Spurgeon, she was a remarkable woman in her own right. Her only prior biographer, Charles Ray, concluded of her that Susie would live on “not only as the wife of Charles Haddon Spurgeon … but as herself.”

Excerpted from Susie: The Life and Legacy of Susannah Spurgeon, Wife of Charles H. Spurgeon by Ray Rhodes (©2018). Published by Moody Publishers. Used by permission.