This process led me eventually to a wealth of helpful information, and it ultimately served to deepen my Christian faith. In hindsight, the doubts and challenges I wrestled with proved to be like infections that produced “spiritual antibodies” in me as I studied and responded to them. In the end, I was stronger for having undergone this time of searching, probing, and testing, and I was therefore more confident in the faith I’d embraced—though this result was certainly not guaranteed at the outset.

For my friend Lee Strobel, the opposite happened. He had come to accept a worldview that was secular, skeptical, and had no room for God. He was a spiritual doubter who, over time, began to reexamine—and eventually to doubt—his own doubts. The catalyst for this change was the example set by his wife, Leslie, who, after coming to faith in God, gent­ly challenged Lee to take another look at what he believed.

His initial reaction to this process was to get angry. He slammed doors, belittled his wife’s newfound faith, lashed out against her church, and increased his use and abuse of alcohol. One day, in his frustration, he even kicked a hole in their living room wall.

Gradually, though, Lee settled down and opened up to reason and truth, instead of simply reacting emotionally. To this day, he’ll tell you that he did not enjoy having his atheistic traditions challenged. And he didn’t relish the thought of acknowledging a God who, once allowed through the door, would have a say in how he lived his life.

But somehow Lee found the humility—and the persistence—to wrestle with his spiritual questions, to examine the purported answers, and to carefully weigh the evidence, both pro and con. It took him nearly two years. In the end, instead of reaffirming his atheistic faith, he had a complete change of mind. Or, as he now puts it, he experienced “a rush of reason.” Leslie Strobel describes it more as a miraculous change of heart. Today, Lee is a devout Christian, and he writes books and speaks to groups all over the world, helping others who are on spiritual journeys similar to his own.

I don’t know where your journey will take you. It could be a reaffirmation of the teachings and traditions you grew up with, as it was for me. Or it could be a redirection of your thinking toward a fresh set of beliefs, as it was for Lee. But I’ll tell you one thing for certain: both Lee and I are glad we embarked on the adventure of spiritual discovery. We’re thankful we did what it took to examine our beliefs and to carefully and deliberately find a faith we could count on. (To learn how you can do the same thing, read chapter 8, which discusses the Evidential faith path.)

The only way you will be truly confident about your faith will be to test your traditions—to make sure that they are grounded in truth.

Taken from Confident Faith: Building a Firm Foundation for Your Beliefs by Mark Mittelberg copyright © 2013. Used by permission of Tyndale House Publishers, Inc. All rights reserved.

Order from Amazon.com: Confident Faith: Building a Firm Foundation for Your Beliefs 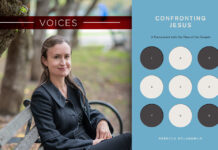