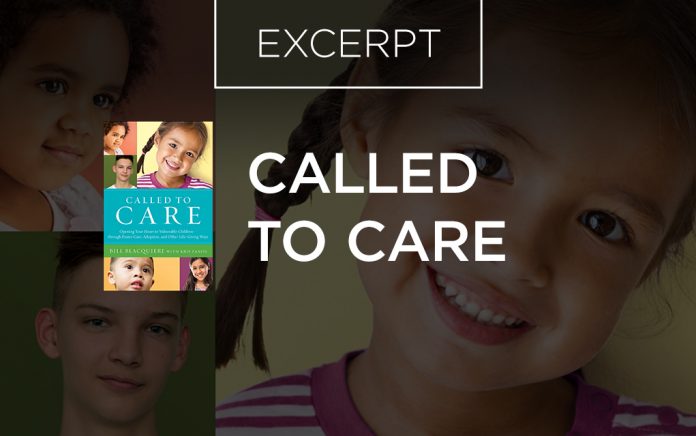 Excerpted From
Called to Care
By Bill Blacquiere and Kris Faasse

No matter how a family is created, the world of the child is never just about the nuclear family. Family is about grandparents, aunts, uncles, cousins, and in the case of a child in foster care or who has been adopted, the birth family. And in the best of all worlds, close friends, neighbors, and the people in churches and small groups are “family” too.

Family offers emotional, physical, monetary and spiritual support to those who answer the call to care. They may not be called to adopt or foster themselves, but they are called to help those in their circle who are.

It is very important that extended family accept and build connection with a child or children who join the family through foster care or adoption. This acceptance provides a sense of belonging to the child and that child’s family. How would a family feel if they were excluded from reunions or holiday gatherings because they had adopted a child of another race or country of origin? Or if foster children were excluded from family gatherings or treated differently because they “aren’t really part of the family”?

Imagine how a child would feel if she heard this conversation about her:

“Are these your grandchildren?”

“Yes, these are my biological grandchildren, and this is my adopted grandchild.”

It may not seem too bad to do so on the surface, but singling out that child as adopted can create feelings of being different, of not being enough, of not being part of the family. Adopted children may struggle with these feelings already; labeling them as different makes it worse. The emphasis should be placed on accepting and integrating children into the family by all members.

Parents—adoptive or foster—need to be alert to subtleties within the extended family and educate the family about the messages they send. Most of the time they don’t realize those messages might be divisive or hurtful, but occasionally they do. That’s when it’s time to have a serious talk or avoid that person altogether if they don’t change.

Some family or friends may want to make challenging behavior in children be about their adoption or that they are in foster care. But not all behaviors are because of adoption or foster care. It’s not family members’ jobs to pass judgment on or attempt to determine the reasons for the behavior. They need to love the child and let the parents seek help to figure out behavior if they need to.

Family should be the safest place for vulnerable children who have experienced physical and emotional trauma over which they have no control, and who may act out the traumas to which they have been exposed. As with most of us, behavior can be their clearest voice.

Excerpted from Called to Care by Bill Blacquiere with Kris Faasse. Bethany House, a division of Baker Publishing Group. Copyright 2019. Used by permission.