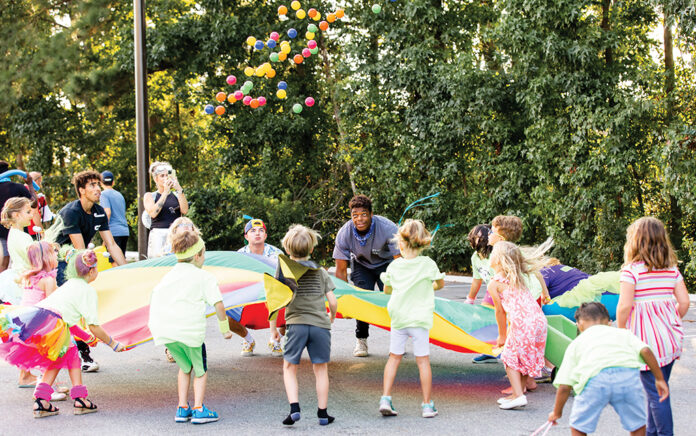 We didn’t know it at the time but it turns out we were training our leaders right there. It was an opportunity for discipleship through serving we hadn’t anticipated, and we ended up serving 3,000 meals per day after that.

Lead Pastor Matt Wilson shares how Ekklesia Christian Church in Conway, South Carolina, strives to be a beacon for its neighborhood.

We started the church seven years ago as a Bible study in our home. As it grew, we realized God was calling us to do something more. Another church had moved off the local college campus, and the woman who reserved the location for that church contacted us and asked if we’d be interested in meeting there. Coincidentally, a family had donated some money, giving us exactly enough to cover 10 weeks of rent. We really had no clue about how to plant a church. And when we finally found out there were organizations that actually help church plants, they told us we’d done it all wrong.

We thought meeting on a college campus meant we’d have all college students, so we went with a Greek name—Ekklesia. But it didn’t happen that way. We started getting young families. Coastal Carolina University was being taken over by strollers and minivans.

Then, in 2018, we purchased some land, but as soon as we were in construction, we had the 1,000-year flood and then a massive hurricane. Construction stopped. We were literally the highest property around. So, it became, how do we serve the community? People had lost electricity and their homes were flooded. We put up a tent, had a church service and said, “You know what? Let’s just see how many people we can feed.” We made “chicken bog,” a South Carolina chicken, sausage and rice dish. We fed 300 people. But, by the end of the day, a disaster recovery company called us and said, “Hey, if we brought mobile kitchens and freezer units with food, do you think you could get volunteers to serve the community?” We’re a small church with not many people, but we’re scrappy. We said yes.

And this had a multiplying effect?

From Outreach Magazine  Steering Through Chaos

Yes. We had been wondering how to train people to volunteer and serve once our building was completed. We didn’t know it at the time but it turns out we were training our leaders right there. It was an opportunity for discipleship through serving we hadn’t anticipated, and we ended up serving 3,000 meals per day after that. We were also mucking homes and were able to help rebuild multiple houses that had been destroyed. It was just about being available. Every time we served, God took that and blessed it and multiplied the people and multiplied the efforts. God was bringing service-minded people who wanted to help others. And that’s really stayed in our DNA.

Construction eventually resumed and you now call your church building the Launchpad. Why?

Because we’re not going to use a building a couple of hours each week and then let it be vacant. It’s a community center. It’s here to serve. We’ve been able to open office space to nonprofits in our community. We have outreach programs for kids, doing drama, music, and art performance. We open our space to homeschool families. We let law enforcement officers come train in our space. We hold events for foster families. The college marching band can use our space. Area sports programs can use our space.

And we’re building a worship space specifically for those with disabilities. It’ll be their church. They can speak more, lead more, worship more. Dance. They can share with their friends and invite people to our church. We’re also building a cafe. It’s a lot like a sports bar—no alcohol, but lots of television screens. People will go to Buffalo Wild Wings, but not church. So this is a great first step for people who may not initially go to a church.

What’s your biggest struggle in getting people plugged into Ekklesia?

Probably building trust and reaching those who’ve been hurt by the church. We’re in the Bible Belt. Churches have been powerful for a long time, and people went just because that’s what they were supposed to do. People were just preached at and expected to give, but they never had ownership of the church. If those in leadership allowed people to be the church, well, then that meant the leaders could be replaced. So instead, people have been kept submissive and almost fearful. And what we’ve seen is people finding freedom from that and independence in biblical Christianity. I wouldn’t say it’s a struggle because a struggle kind of wears you out. This keeps us excited.

Tell us about someone whose life has been transformed through Ekklesia.

From Outreach Magazine  Support After a Marriage Ends

Easter 2020. Churches weren’t meeting inside buildings. So, we decided to just have our leadership teams sit outside. We made communion available outside. We had people available to pray with anyone, and a woman pulled into the parking lot. She said she had planned on committing suicide that day. She was very depressed, but because she passed by a church and there were people there, she pulled into the parking lot instead. And we baptized her. Now, a year and a half later, she’s greeting, welcoming others to Ekklesia.

How is her story a testimony to your retention strategy?

We want to be able to get the sheep in the pen, but we also want to send them and create change for our community. The church needs to be seen. We need to have a relationship with the community so we can reach them. Everything we do, we do it with intentionality, discipling people to make disciples for Jesus.