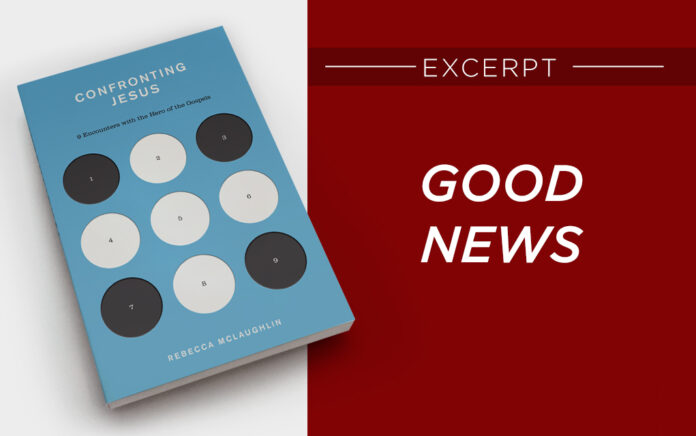 My guess is that for most of us, this manifesto of Jesus’s kingship sounds attractive.

When Maximus defeated the Germanic tribes, the emperor, Marcus Aurelius, might have issued a euangelion—a proclamation of the good news. In English, this Greek word is translated by a word that has come to carry massive spiritual weight: gospel. When we hear that word, we might think of the four Gospels of Matthew, Mark, Luke, and John; or of the basic gospel message of the Christian faith; or perhaps of gospel music sung by artists like Aretha Franklin. But for the people who first heard the word on Jesus’s lips, euangelion would have carried political weight. To be sure, for Jews, there was spiritual weight too. “How beautiful upon the mountains,” declared Isaiah,

Isaiah was first written in Hebrew, but in early Greek translations, the verb for “bring good news” was euangelizō. The corresponding noun for “good news / gospel” is euangelion. But even here, the good news or gospel is about a coming king. All of this is channeled in Jesus’s first recorded sermon in Mark: “The time is fulfilled, and the kingdom of God is at hand; repent and believe in the gospel” (Mark 1:15). These words are dangerous: a challenge to the power of Rome and a call to submit to the incoming God-ordained King. But what would this King be like?

Jesus’s first recorded sermon in Luke answers this question. It’s delivered in his hometown synagogue in Nazareth. Jesus is handed the scroll of the prophet Isaiah. He finds the passage he wants, and he reads,

The Spirit of the Lord is upon me, Because he has anointed me
to proclaim good news to the poor.
He has sent me to proclaim liberty to the captives and recovering of sight to the blind,
to set at liberty those who are oppressed,
to proclaim the year of the Lord’s favor. (Luke 4:18–19)

Then Jesus rolls up the scroll, gives it back to the attendant, and sits down. Everyone’s eyes are fixed on him. “Today,” he says, “this Scripture has been fulfilled in your hearing” (4:21).

My guess is that for most of us, this manifesto of Jesus’s kingship sounds attractive. We’d like to live in a society marked by justice, compassion, liberty, and healing. But we don’t feel a desperate craving in our bones for rescue. While we may care about liberty and justice for all, we’re likely not dying without it for ourselves. But just as the Allies’ victory was desperately good news for the surviving Jews in Nazi concentration camps and for the Londoners beleaguered by the Blitz, so Jesus being God’s anointed King is good news for the suffering and oppressed. He’s come to elevate the destitute. He’s come to liberate the prisoners. He’s come to give sight to the physically and spiritually blind. He’s come for those who feel their desperate need of him. This is the kind of King that Jesus is, and his prison-breaking kingdom is still rolling out today—whether we realize it or not.

King’s confidence was not derived from some impersonal force. It depended on his faith in Jesus’s everlasting, empire-quelling rule. Martin Luther King was clearly a religious guy, but can’t we just have justice without Jesus? No. If we rip this central pillar out, we have no reason to believe there is a moral arc to the universe at all—let alone that it will bend toward justice. Israeli historian Yuval Noah Harari gives us a clear-sighted, atheist perspective in his global bestseller, Sapiens: A Brief History of Humankind, when he declares, “There are no gods in the universe, no nations, no money, no human rights, no laws, and no justice outside the common imagination of human beings.”

Commenting on the Declaration of Independence, Harari notes that “[t]he Americans got the idea of equality from Christianity,” and he calls human rights “figments of our fertile imaginations.” Another famous atheist, Richard Dawkins, observes that “moral values are ‘in the air’ and they change from century to century, even from decade to decade.” In fact, when we look back at history, we’ll find that the very standards by which we judge the moral universe today were given to us (whether we realize it or not) by Jesus the Christ: the King who wore his crown upon the cross. But Jesus didn’t come to bring justice and healing only between human beings. He also came to bring justice and healing between us human beings and the holy, perfect, righteous God who made us.

When Jesus rolled up the scroll and sat down in that synagogue two thousand years ago, he claimed he was anointed by God to put things right. But what he didn’t read would have been as striking to his hearers as what he did. In Isaiah, the words after which Jesus rolls up the scroll—“to proclaim the year of the Lord’s favor”—form the first half of a thought which ends, “and the day of vengeance of our God” (Isa. 61:2). Jesus stopped mid-sentence. The time of opportunity is now: the year of the Lord’s favor, when rebels could surrender and come home. Judgment day is still to come, when each of us will give an account to our Maker for our sin, when none of us will have a chance to stand up on our own account. But as of now, it’s not too late to turn around and throw ourselves upon the mercy of the Judge.

Last summer I wept as I read to my kids the moment in Harry Potter and the Deathly Hallows when Percy Weasley shows up. He’s been a fool, aligning with the Ministry of Magic that’s being controlled by Lord Voldemort. But unexpectedly, at last, he comes to fight with his family and friends against Voldemort’s army. It’s not too late for him to change his mind. And as we see throughout the Gospels, it’s not too late for us to turn around and put our trust in Jesus who alone can carry the weight of our sin.

Excerpted from from Confronting Jesus by Rebecca McLaughlin, ©2022. Used by permission of Crossway, a publishing ministry of Good News Publishers.