Home Resources Why Are Preaching and Teaching Central? 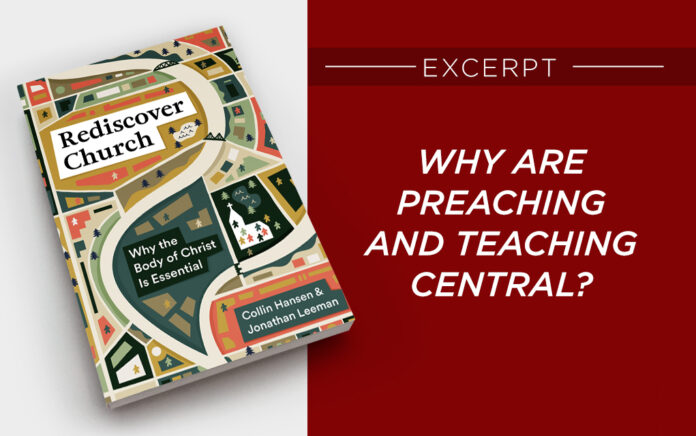 Excerpted From
Rediscover Church
By Collin Hansen and Jonathan Leeman

Throughout the Old Testament, the prophets echoed a refrain: “Thus says the Lord.” They spoke with authority because God entrusted his message to them. They spoke on his behalf. That means the prophets did not always say what the people wanted to hear. In fact, it was common for kings to punish the prophets when they didn’t like what they heard.

For instance, King Zedekiah allowed the prophet Jeremiah to be tossed into a cistern and left to die of starvation (Jer. 38:9). Why did the king do this? Jeremiah had told the Jews in Jerusalem that if they stayed in the city, the Chaldeans would kill them. He was right, of course. But that wasn’t what the king and his military commanders wanted to hear. It was bad for morale (vv. 2–4). They blamed the messenger so that they wouldn’t have to heed the message. They preferred prophets who told comforting lies. God, on the other hand, was not amused by the lying: “Behold, I will feed them with bitter food / and give them poisoned water to drink, / for from the prophets of Jerusalem / ungodliness has gone out into all the land” (23:15).

Through his prophet Ezekiel, God rebuked the leaders, or “shepherds,” of Israel who lied to the people they had been commanded to protect: “Ah, shepherds of Israel who have been feeding yourselves! Should not shepherds feed the sheep? You eat the fat, you clothe yourselves with the wool, you slaughter the fat ones, but you do not feed the sheep” (Ezek. 34:2–3).

The experiences of Israel warn that as we rediscover church, we’re prone to seek out leaders who tell us only what we want to hear. And leaders are tempted to give the people what they want, because it’s easier to make a living that way. It’s even possible for preachers to sound like bold truth tellers when they only speak harshly about people outside their churches. They may sound courageous, but they never actually challenge the people who pay their bills.

In fact, that might be the greatest challenge most preachers face. How can they preach the Bible and nothing but the Bible without stepping on more than a few toes? How can they say hard and truthful things to people who control their livelihoods and could remove them and their families from their houses and communities?

Teach the Word to Yourself

Given this temptation for preachers, it’s important for the rest of us to make ourselves willing to hear and heed the Word, even if we don’t always like it or agree with it at first. As you rediscover church, you’re looking for preachers who will not just make you depend on them for hidden biblical insights, but will show you how to teach yourself the Word.

The best preachers don’t make you marvel at their own skill. They show you God’s glory as seen in his Word. And when you see God that way, you want as much of him as you can get. You grow in eagerness to read and apply the Word for yourself. Then you enter a virtuous feedback loop. The more preachers help you know and love the Word, the more you develop that taste for yourself, and the better taste you develop for meaty preaching.

That relationship between preachers and church members is the key to any healthy church because there is never just one teacher in the church. All of us have been called to teach the Word in some capacity. For instance, all elders, and not just the preacher, must be “able to teach” as part of their leadership (1 Tim. 3:2). Parents teach the Word to their children (Deut. 6:7). Older women teach younger women (Titus 2:3–5).

From Outreach Magazine  How to Get the Most Out of Conferences

With this view of the Word, churches protect themselves from one of the most common problems today, which the biblical writers anticipated and endured themselves. Paul told Timothy to warn the Ephesians not “to devote themselves to myths and endless genealogies, which promote speculations rather than the stewardship from God that is by faith” (1 Tim. 1:4). In Paul’s second letter to Timothy, he likewise warned, “For the time is coming when people will not endure sound teaching, but having itching ears they will accumulate for themselves teachers to suit their own passions, and will turn away from listening to the truth and wander off into myths” (2 Tim. 4:3–4). We see, then, that a church focused on the Word will be less interested in “their own passions,” speculation that gives the appearance of knowledge but actually indicates foolishness. Paul might have thought Satan himself created the internet as a tool to divide and distract churches with endless speculation.

Think about the preacher’s unique challenge today. He might command as much as forty-five or even sixty minutes of your attention this week. And that’s if your attention isn’t divided by children, drowsiness, and text messages popping up while you’re trying to watch the sermon at home. But social media, videos, and podcasts command seemingly every spare moment around work, driving, and sleeping. No wonder it feels as if our churches can’t get on the same page! We’re not prioritizing the same pages of Scripture. The churches that will emerge strongest through the aftermath of COVID-19 will be those that differentiated between God’s Word preached in power and the countless other words that vied for our dwindling attention.

Order this book from Amazon.com

Excerpted from Rediscover Church: Why the Body of Christ Is Essential by Collin Hansen and Jonathan Leeman, ©2021. Used by permission of Crossway.