Home Resources Where Is Our Innovation? 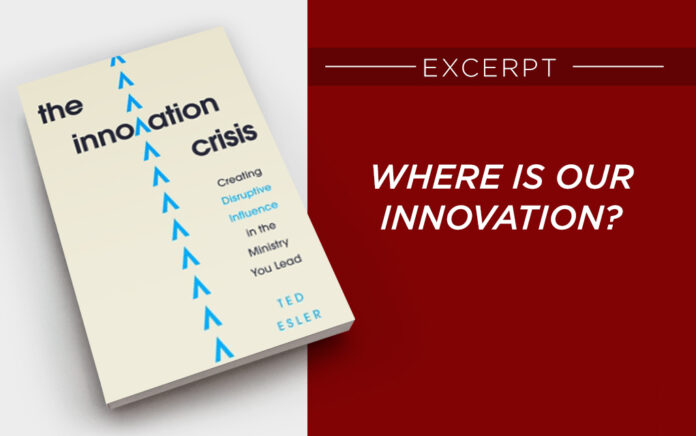 Excerpted From
The Innovation Crisis By Ted Esler

Innovation fills the pages of the New Testament. We have the new covenant because it ushers in the fulfillment of the old covenant while introducing the kingdom of God. Each time Jesus opened His mouth, it was as likely as not that some innovative new way of understanding the world was about to be revealed. You want to be first? Be last. Rich people? Much harder for them to get into heaven. You want to throw a stone? Sure, if you are pure in heart, go for it. Jesus inaugurated a kingdom unlike any before or since. It needed new wineskins because the old could not contain it. Jesus gives a new commandment in John 13 (“that you love one another: just as I have loved you”). His followers struggled to keep up.

At one point His disciples chided Him for saying things that were hard to hear (cf. John 6:60). Why were His teachings so hard? Because they revealed a new way of seeing truth that had not been considered before. The cross, though explained and foretold by Jesus and the prophets, took His followers by surprise. In Matthew16:21 we read, “From that time Jesus began to show his disciples that he must go to Jerusalem and suffer many things from the elders and chief priests and scribes, and be killed, and on the third day be raised.” What could be clearer? Then, when it happens, they scatter, unable to remember that He was coming back to life. It was paradigm busting. To quote an old movie, the idea was so preposterous that they couldn’t “handle the truth.” Even after Jesus’ resurrection, the disciples were still asking about its fulfilment in a political sense, not the much more expansive realm of the heart (cf. Acts 1:6).

The early church was also highly innovative. The inclusion of Gentiles in the kingdom was almost a bridge too far for the primarily Jewish early church. Considering Jewish history and the contents of the Old Testament, it is understandable. Jews were instructed not to mix it up with Gentiles. How then, in a relatively short span of a few chapters in Acts, do we find the broad embrace of the Gentiles into the church? Like any innovation, detractors to this concept lasted for years (read Galatians for evidence of this). These are all jaw-dropping innovations embedded in the core of New Testament Christianity.

From Outreach Magazine  Evangelism After Pluralism

Where Is Our Innovation?

If innovation is so much at the heart of the New Testament narrative, why do we see so little of it today? Perhaps one reason is our view of doctrine. Foundational truths are immovable. The gospel message itself is not up for further innovation. The work of the cross has been completed. We cannot innovate more grace into the sacrifice that Jesus made on our behalf. We will never write additional books for the New Testament canon. Yet, there is great room for innovation in loving others, communicating the gospel, celebrating His glory, fulfilling the Great Commission, taking care of widows and orphans, and working for justice and just about every other goal ministry leaders might consider.

The church produces weekly services like a factory. Unfortunately, they are numbingly the same from week to week and church to church. At times it appears to me that we are no better than McDonald’s at delivering the exact same thing everywhere. We even export our way of doing church globally when cultural difference invites diversity in form.

As the leader of a missionary association, I am sometimes asked why, after two thousand years, the Great Commission goes unfulfilled. From a human vantage point, I have concluded that a lack of creativity and risk-taking by God’s people are at the core of this failure. We are besieged by a poverty of imagination.

I understand the overwhelming pressure that leaders face to be creative risk-takers. The typical ministry leader feels the strong current of innovation and change all around them. Yet our churches and organizations are more like the rocks and trees in the river as the floodwaters rise. We cling to them, hoping not to be swept up in the direction this river of change is taking us. What if we could direct this current instead of simply being washed along with it? What if the people we lead could let go of the rocks and branches and freely swim in the river of innovation?

Not long ago, I corresponded with a leader about the need for innovation. A donor was asking how the ministry was innovating considering the challenges in the world today. This leader asked, “Whatever happened to faithful service? It doesn’t seem like it’s good enough anymore.” This CEO, who leads a multimillion-dollar-a-year Christian ministry, is struggling under the pressure that comes when there is no innovation. He knows there is an expectation to innovate. Yet, it is about all he can do to simply keep the ministry he operates up and running. Leaders are being weighed in the balance of innovation expectation and find themselves lacking. I know this because I feel it myself.

We Need a Whole New System

With the onslaught of COVID-19, I was hopeful that perhaps churches would birth new, innovative models of ministry. It was hard for me to watch the virtual church services that were rolled out. Most were mirror images of the in-person services that already feel stale. There were a couple of songs, some announcements and a prayer, another song, a sermon, and then a song. The same order of worship, delivery style, and teaching methods were employed. This is despite pastors now having the combined contributions of the Internet to bolster their messages, support their points, borrow from other teachers, map the biblical sites, and collaborate with online chat, video, and text. Yet, every virtual church gathering I watched reproduced the in-person sermon without any significant departure. I am certain that there were stellar examples contrary to this. I had hoped a global pandemic would create the sparks that would lead to an inferno of innovation.

If you are like me, you understand the yearning for something new. Something that adapts to emerging cultural realities, sometimes creating culture, while communicating the ancient truths of the Bible. In fact, this is part of the challenge before us. People are most attracted to new things when they resonate with their deeply held human desires, wants, and needs. Instead, we in the church are serving up leftovers. Much of our message and how we deliver that message was designed for modernity. We now live in a postmodern world.

We face a crisis of innovation.

Adapted from The Innovation Crisis: Creating Disruptive Influence in the Ministry You Lead by Ted Esler (© 2021). Published by Moody Publishers. Used by permission.